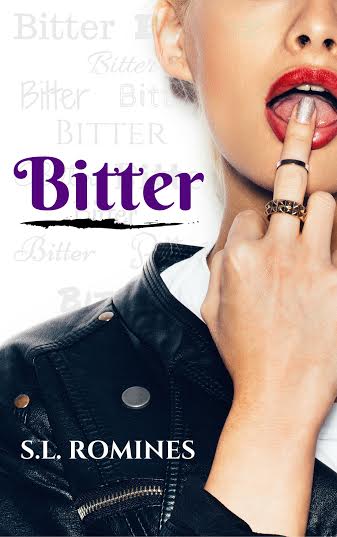 Bitter- (of people or their feelings or behavior) angry, hurt, or resentful because of one's bad experiences or a sense of unjust treatment.


Vivian Halliwell will be the first to admit that she’s the ultimate definition of a bitter bitch.


Surviving an explosive past, Vivian has guarded her heart with steel walls and a barbwire attitude. Only letting a handful of people close to her, she has built a life that suits her just fine.


Well, that was until…


When Sex-On-Legs Corporal Jax Maddox walks into her life, Vivian’s world is tossed upside down. Always keeping her emotions at bay, the six foot two Marine shows her that love is worth fighting for, even if you have to break down a few walls, deal with a butt picking, lollypop licking mini adult, slap a smile on your face, and point out a few crusty empanadas along the
way…the ride is totally worth it. 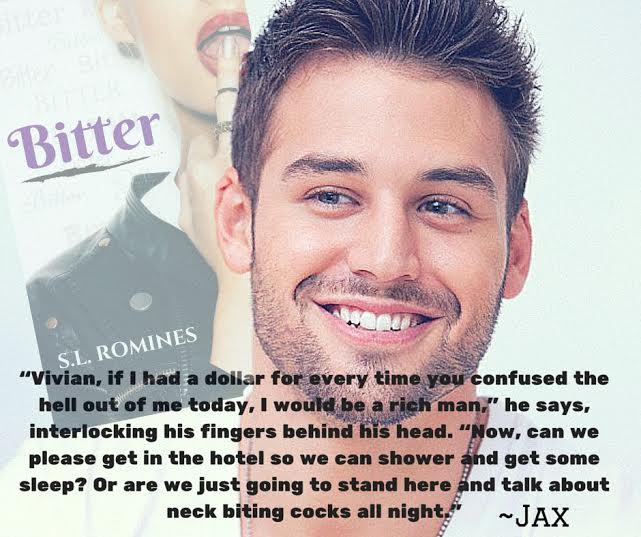 
{Unedited}
I realize I’m in purgatory the moment we enter the park. If there aren’t ten children screaming in one direction, there’s twenty more whining for this or that. And let’s not forget to mention the parents of said spawn giving their children the ugly side eyes, or the mother over by the stroller rental station freaking out because the gentleman behind the counter just rented out the last double stroller in the entire park. Or how about the dad with the ten cameras wrapped around his neck begging his three small children to stand still long enough so he can take their picture with the famous mouse, while the fanny pack wearing mama checks her pouch for the tenth time. Yes, lady! You have enough tissues for your snotty nose mini me’s!


I look up at Jax and somehow get pulled back into an easy comfort zone when he flashes that goofy lopsided grin at me.


“I’m just trying to figure out why none of these parents haven’t invest in those child leash thingies,” I say as one mini spawn runs head first into my butt, nearly wiping me off the planet.


Again, and again, and once more for good measure. “Hey! Quit ramming your big head up my rear, kid! Things, dirty, filthy, brown things come out of there.”


The little head banger looks up at me with a huge colorful round lollypop cemented firmly in his grip, the evidence of said lollypop smeared across his face.


“Go find your mom and tell her to get her tubes tied.”


“Easy, Vivian,” Jax says, trying to get between me and junior. “He’s just a little kid. Let me see if I can flag someone down to find his parents.


As Jax walks to the nearest Lost and Found station, the kid stares at me, sizes me up and
shrugs his shoulders. He stands there a weird look flashes across his face. And before I can even prepare myself for his next move, the little creature reaches behind himself and picks his butt, only to bring his chubby little fingers up to his nose and takes a big whiff.


As the kid continues to furiously lick his sucker, a woman’s nasally voice screeches towards us.


“Leonard! Leonard! There you are! Mommy was so worried about you. Are you okay my little pumpkin butt?” The woman smiles at me. “I hope he wasn’t bothering you. Leonard is a bit rambunctious and tends to wander off at times. We thought this pretty sucker would keep him occupied.”


I waste no time, reaching into my purse and pulling out the first bill my fingers latch on to. “Here’s a twenty, lady.” I thrust the bill at her. “Go buy one of those kiddie leashes and tie your little mini me to it. And, you might want to destroy your uterus while you’re at it. For the sanity of the entire human race, please do not populate the earth with another one of those ever, ever again.”


Leonard’s chubby hand and rushes off. My eyes narrow as the little creep looks over his shoulder and sticks his fat tongue out at me.


“Hey!” Jax throws his arm around my neck, smiling like a buffoon. “Kid found his mom, huh?”


I look up at Jax and try really hard not to punch him in the nuts. “Not a moment too soon.”


“Why do I get the impression that you don’t like kids very much?”


I shake my head at his über dumb question. “Yeah, just now! That kid tried to crawl up my ass! Who does that? And his fanny pack wearing mother had no clue where the little tyrant was. She and her man seriously need to not have any more children.”


“So I take it having any of your own is out of the question?”


“Dude, have you ever seen what one of those,” I say, stopping in front of a toy store and point at a little baby parked in a stroller wearing mouse ears, “looks like coming out of a vagina?


It is the most horrific thing I have ever witnessed in my entire life. When Cass had her little girl, she begged me to be in delivery room with her. Apparently she was afraid that hubby would pass out. Needless to fucking say, when I woke up in the bed next to her the nurses told me that I went out like a light the moment the baby’s head popped out, hitting my own damn head on the doctor’s medical tray. Picture a small little human clawing its way out of something the size of a pea? Vagina holes aren’t very big, but man, once they’re stretched out to their maximum capacity, you might as well kiss your pussy goodbye. No and thank you.”


I hear a loud gasp from a woman standing next to the stroller who I assume is the baby’s mom. She has her hand over her heart and her look of disgust is clearly evident, stretching across her features.


“What?” I ask, throwing my hands up, and then pointing at the woman. “Don’t even look at me like that. Face it lady, you know after having that baby, your vagina probably looks like wrinkled roast beef curtains. So don’t kid yourself because…your vagina hates you.”


Jax looks like he’s lost his damn mind, pulling me away from the toy store.


“You are something else, Vivian,” he says, hurdling me through a sea of people. “Your mouth really has no filter, does it?”


“Why the fuck do I need a filter? Why? People should be able to handle the truth. And that woman back there knows damn well that her taco looks more like a crusty empanada.” 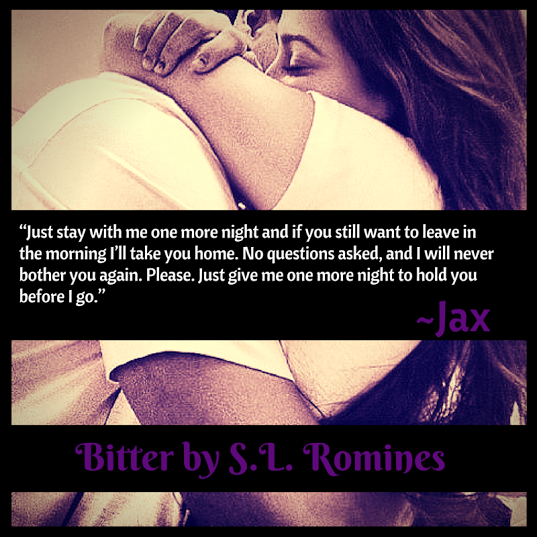 S.L. Romines lives in a small town in Central California. And if you blink, you just might miss it. She resides on ranch with her family which she lovingly refers to as the funny farm. Between getting dish pan hands, listening to three bickering teenagers, pretending that she’s a gourmet chef (her family would like to disagree), and trying to tune out the sound of twenty-seven deranged Guinea fowl, somehow she finds the time to write about crazy characters that even make her laugh till she cries. 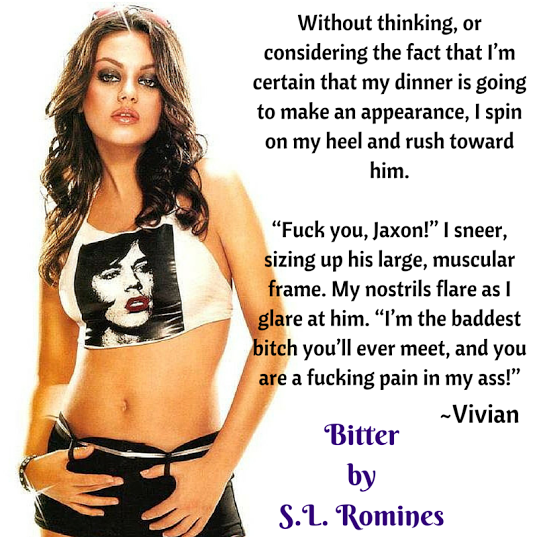