This isn't your Typical Everyday fairytale.
This story isn't sweet or sugary.
Instead...
It's Raw and Dark
It's Rough and Dangerous
And It's Definitely not for kids under 17 years of age.


So turn back now if you're not ready for Lyric and Blaire's story. Because shit just got Real.


“I’ve learned a lot this past year, but there are two things I’ll never forget: one, People aren’t what they seem, and two, I fucking hate liars.” –Blaire

Blaire Morgan was a quiet, grief stricken girl when she left Mobile, Alabama, a year ago after her brother’s unexpected death. She returns a year later with fresh wounds from another betrayal, and she’s not the same person. A woman letting her tortured past rule her life, her “take no shit” attitude is catching the attention of everyone that crosses her path, including the bad boy front man of Lyrical Obsessions—the new band that plays at Jay Jay’s. When she learns he has something she wants, she plans on doing whatever it takes to get it.

What is a demon? An evil spirit possessing a person, acting as a tormentor in Hell?

Lyric “The Demon” Devereux is that tormentor and Hell is any place he sees fit, either in the fighting ring or on the streets. He killed his first person at seventeen years old, and that list has grown over the years—as well as his list of enemies—but his biggest enemy is himself and he doesn’t know how to win that battle.

When Blaire comes into town like wildfire and turns heads, Lyric’s temper emerges—uninvited and unexpected. His plan to stay at a distance for her safety, and his sanity, changes when she continuously shows up with her defiance and seductive pull. He now has no choice but to face his past that could possibly destroy the both of them.

Tempers will detonate. Lust will consume. Truth will destroy. But will love forgive?

Excerpt
I walk in, but leave the door open. My eyes stay on her as I approach. I see fear at first, but she pushes it away and replaces it with that stubborn trait I’m learning she has. She crosses her arms and looks up when I’m close, refusing to move. “Last night, you asked me for something. Remember?”

I smirk because this game we play is a fucking thrill for me. “Oh, honey. I’ve already been to hell.” I stand in front of her an inch away expecting her to cower, but she doesn’t. Should I make this soft and gentle like before or should I make it punishing for possibly being a part of Polesky’s team? I roll my neck and let it pop in several places before I swiftly grab her by the waist and pull her tight body to me. Her breath hitches and she freezes, but not in fear. In anticipation. It’s written all over her face.

My other hand grabs her by the nape of her neck, and I feel the softness of her bright, red hair between my fingers. “You asked for this.” Then I lower my lips to hers. I want it to be punishing, to show her how much of an asshole I am, but I can’t. I have a deep feeling she needs the exact opposite.

Nipping her bottom lip, I taste her cherry lip-gloss while I massage the tension in her neck. She exhales softly and tentatively opens her mouth. My tongue dives into the moist warmth between her lips, and I savor every fucking millisecond I’m there. I don’t know when or if I’ll be able to kiss her again. Timidly her tongue starts to move against mine before her hands reach up to grab my shoulders. I feel her nails bite into my skin through the fabric of my t-shirt, but it feels fucking amazing. After this, I stop moving and let her take control. Let her feel me like I said she would last night. Let her savor every touch, every feeling I arouse in her. But in all honesty, I’m feeling her. I know without a doubt that this kiss is one I’ll never forget.

The hand on her waist slowly traces up her ribs, over her exposed collarbone, and across her erratic pulse. When both hands are cupping her cheeks, I once again take over the kiss that is on its way to becoming feverish. She moans, and a growl forms in my chest. She swallows it just as her hands grab at the nape of my neck to hold me close.

Feeling my dick become stone hard against her stomach, I pull away. We stand there, breathing hard enough to fan one another’s face, while my hands remain cupping her flushed cheeks. Then I let go of her, turn around, and walk out the front door knowing, without a doubt, I’m in deep shit. 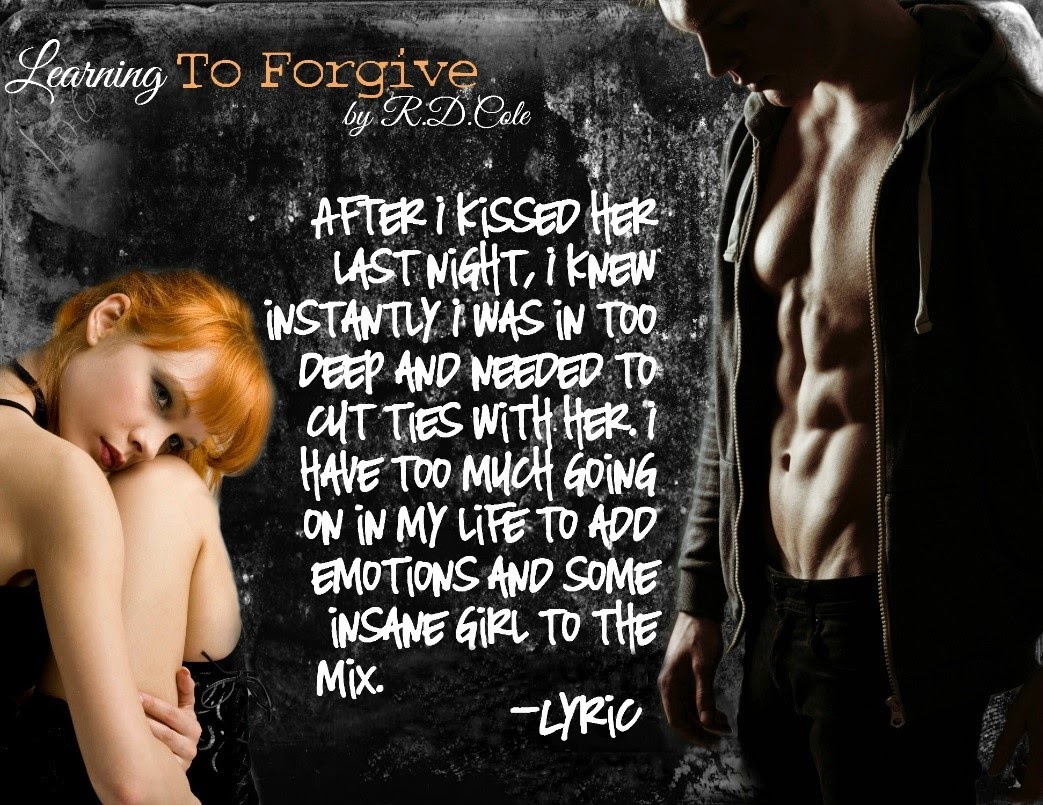 My Review: 5 stars
This was such a great book to read, and it started with a bang! Loved that. Blair was in a bad place and didn't know how to deal. With time, she found that she had a few true friends, people she could really count on and not be alone. She also finds love in the most unexpected place. But it seems to be a love that is all encompassing, with him putting her first. Lyric just threw me off at first, I didn't know what his deal was. The more I read, the more i understood him and why he was the way he was. I give him credit for trying to keep away from Blair. But sometimes, there are people you just can't stay away from no matter how hard you try. There was that one point where you just knew that he loved her, even though they hadn't gone very far, because of something that he took into his own hands and dealt with. I hated the circumstances that they had to endure, but hoped that they would be able to repair what they had been building together. There are some real WTF moments in this book that got me. I do love how Ms. Cole gives you the completion of the story, and at the same time begins the next. I can't wait to see what happens next for this awesome group of people. 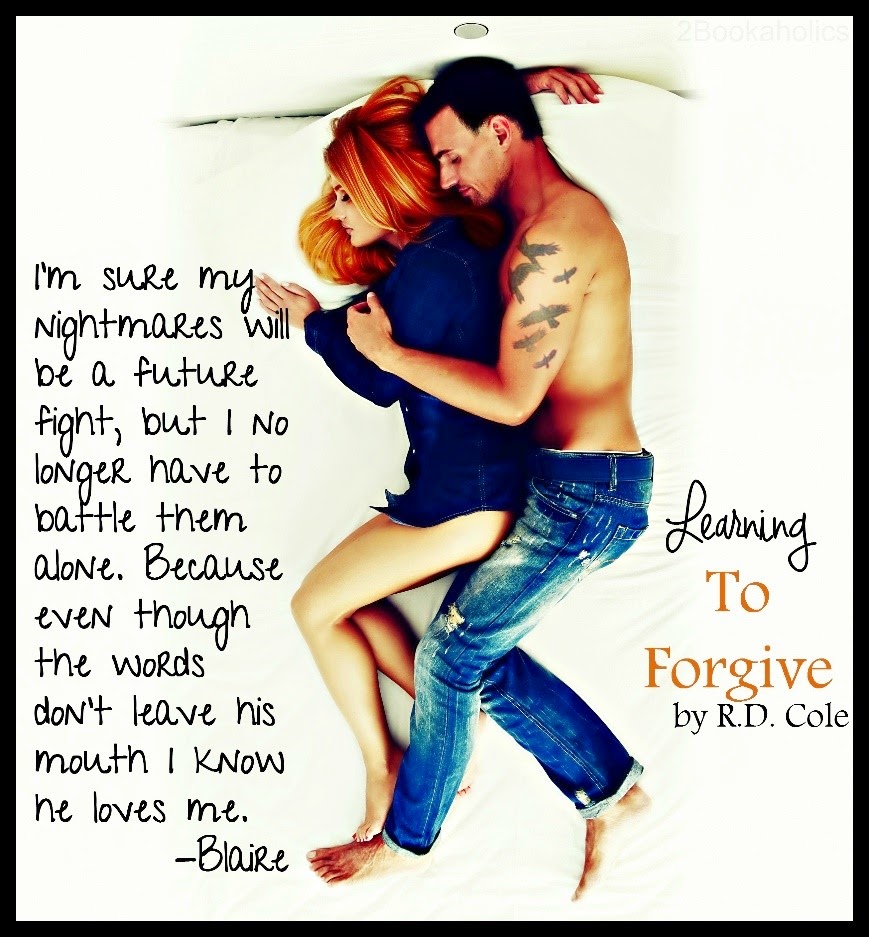 R.D. Cole is a lively person with a determination to make it in life. Once her mind gets set on an idea she pursues it with passion. As long as she has God and her family she feels she can conquer everyday. Besides reading and writing she loves to sing, dance, and go mudding on her Souped-up Can Am. Her hubby is 9 years younger but he seems more mature than her at times and they level one another out. She has a beautiful daughter named Bethani who is a miracle and a fighter. She's the only known living survivor of Matthew Woods Syndrome and when no one thought she'd live R.D. said "yes she will." R.D. takes nothing for granted when it comes to life. "Everything can be ripped from your fingers before they can grasp it. So if you want something in life, do it. Go for it."

That same mindset has helped R.D. write small pieces of her life mixed in to fictional settings and characters that will capture your heart.