In Bed With The Competition by J.K. Coi with Giveaway, Excerpt & Review 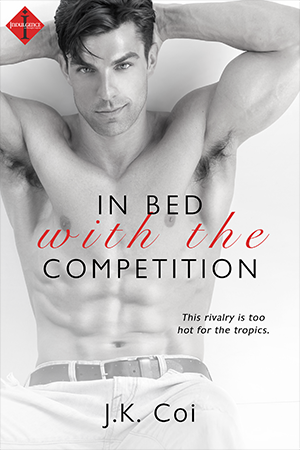 
Book Synopsis:
This rivalry is too hot for the tropics…

Elizabeth Carlson and Ben Harrison used to be friends, coworkers... and almost lovers. But that was before Ben proposed mixing business with pleasure. Elizabeth refuses to lose her heart to a hotshot tycoon with a cutthroat, take-no-prisoners attitude. Not with the prospect of starting her own company at stake.

Driven to succeed in all areas of his life, Ben couldn’t resist the temptation to make Liz his. But then she walked away, igniting a bitter rivalry. Competing for the same contract at a Caribbean conference ignites sparks too hot to ignore, and Ben’s determined to finish what they started, even if it’ll only last a few steamy, tropical nights.

Elizabeth’s resolve begins to crumble under Ben’s blatant seduction. Can she walk away from a hot island fling with the sexiest man she’s ever known with her heart intact, or will losing herself in Ben destroy everything she’s fought to achieve?


Excerpt from
In Bed with the Competition
by J.K. Coi


In the time it took for him to verify his suspicion about her identity, her smile turned brittle, and her expression hardened. “It’s only been a little over a year, Harrison. Don’t tell me I was that forgettable.”

My Review: 4 1/2 stars
I really enjoyed this story of second chances. Ben is a ruthless businessman who holds nothing back, and gives no second chances to anyone. Not after his heart was ripped out. Beth is his competitor, and also the girl who did the ripping, not that she really knew how he felt. Both are a few days early for a conference and the chemistry between them is off the charts, and it only rises the longer the conference goes on. They both have similar yet different companies that are looking for investors. In between business meetings Ben and Beth rebuild what was once broken, and Ben realizes that Beth did and does feel something for him, but that she's afraid. Beth realizes that there are some things that you should absolutely take a chance on, and that some things are out of your control. There are quite a few things that happen, unexpected twists, a tropical storm and some heart breaking moments. But it's such a good read. I absolutely loved the ending, and am looking forward to reading more from Ms. Coi.

Author Bio:
J.K. Coi is a multi-published, award winning author of contemporary and paranormal romance and urban fantasy. She makes her home in Ontario, Canada, with her husband and son and a feisty black cat who is the uncontested head of the household. While she spends her days immersed in the litigious world of insurance law, she is very happy to spend her nights writing dark and sexy characters who leap off the page and into readers’ hearts.