Blurb
She's an investment banker.
He's an outlaw biker.
A little bit of heaven is about to meet a whole lot of hell.

Morgan Powell was raised to be perfect, to set an example for her sisters to follow. Her life has been dedicated to making something of her career, so she wouldn’t know what to do with a man even if you gave her an instruction manual.

Brett 'Ice' Grady spends his days trying to keep up with his teenage daughter, his nights consumed in Regulators’ MC business. He has no time for anything more than a casual hookup.

Two worlds collide when the dangers of his life crash into the calm of hers.
Can she go beyond her own boundaries and chip her way through to the man known to be as cold as ice?
Loosely attached to Chelsea Camaron's Hellions Series and Jessie Lane's Ex Ops Series. 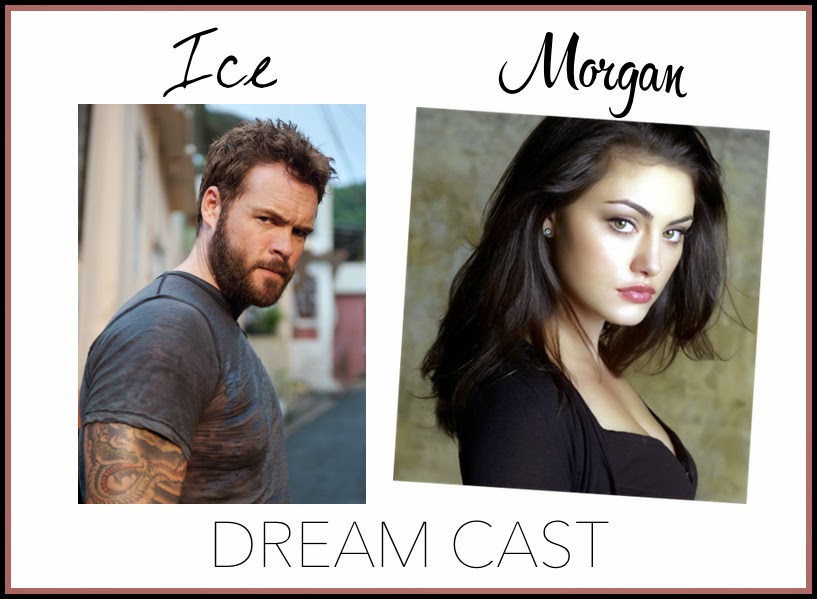 Ice’s Dream Cast
Ice is the ultimate alpha man/asshole. So Chelsea had a very clear vision of who would be his dream cast. Matt Schulze has the sort of rugged good looks that Chelsea and I both love. Beard, messy hair and bulging biceps complete the drool worthy package. Also, in case you didn’t know, Chelsea is a bit obsessed with the Fast & Furious movies. You might recognize Matt from the first two movies. ;)

For Morgan, I chose Phoebe Tonkin. Her gorgeous brown hair, heart shaped face and green eyes make you think of an innocent woman just waiting to be dirtied up by a big, bad, no-nonsense man like Ice. Phoebe also tends to portray characters that have a bit of sass in them. I like the idea that maybe that’s Morgan when Ice gets her all riled up. You might recognize Phoebe the character Haley on one of my TV obsessions, The Originals, or The Vampire Diaries.

We hope you enjoy our dream cast! If you have already read Ice we would love to hear who you would have pictured Ice or Morgan as in your own dream cast pinks. 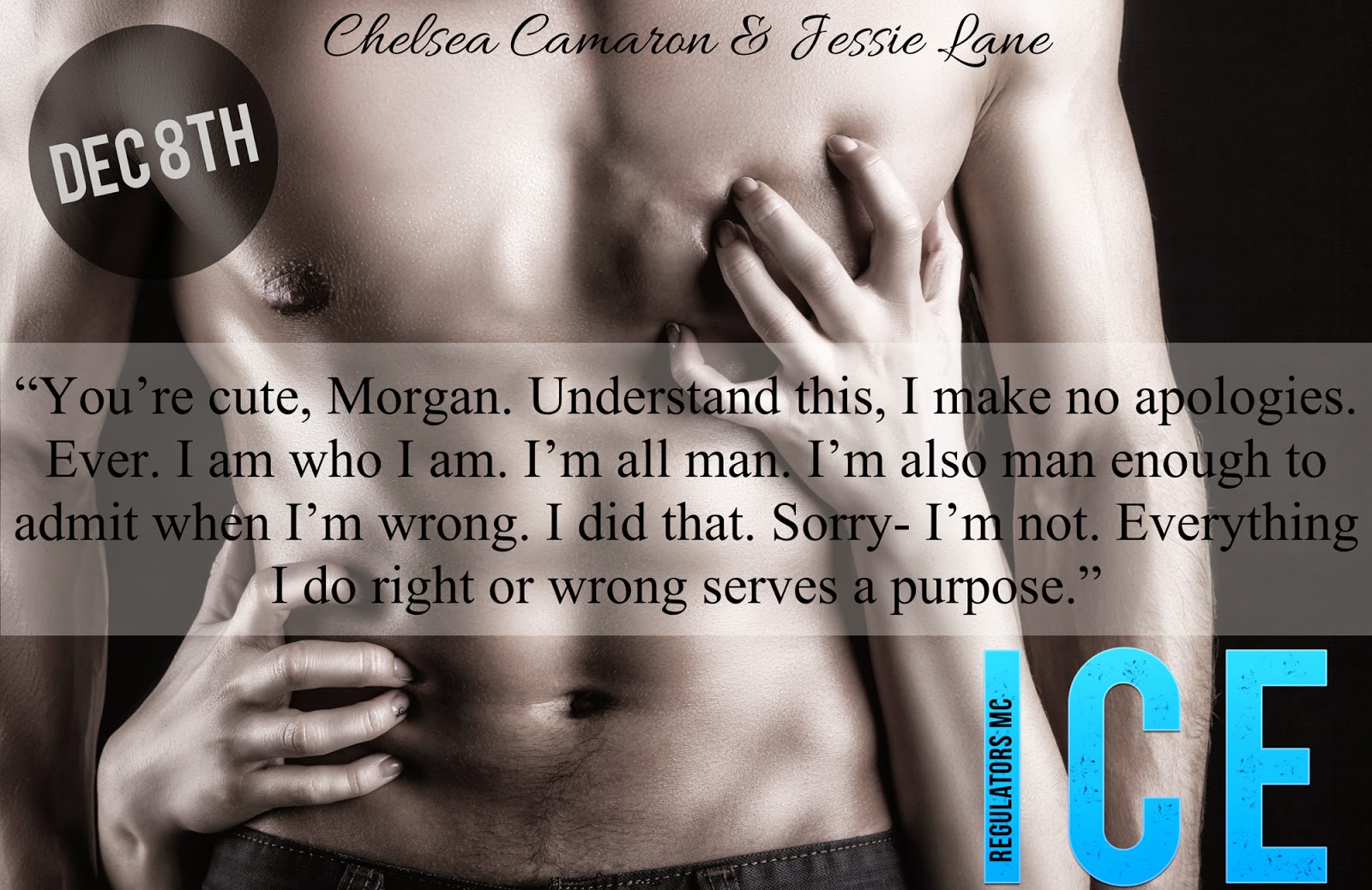 Ice Playlist
Ice’s playlist is filled with hard rockin’ songs that we feel represent the rugged men of the Regulators Motorcycle Club. These guys may be rough and tumble, but deep down they’re the type of men that would fight to the death for their woman.

Chelsea Camaron’s Songs:
Evanescence - Lost In Paradise
Thirty Seconds to Mars - Hurricane - This is the lifestyle of The Regulators MC (would you kill to save a life, would you kill to prove you are right are some of the lyrics).
Don Omar, Tego Calderon - Bandoleros - Tied up in a world with the Cuban Mafia.
Three Days Grace - Give Me A Reason
Halestorm - Better Sorry than Safe
Staind - Something to Remind You
Three Days Grace - Home
Three Days Grace - I Hate Everything About You - When Morgan first meets Ice he's an ass. The first few times they are around each other there isn't love shared between them.

Jessie Lane’s Playlist:
Otherwise - Darker Side of the Moon
Hellyeah – Moth – How I see Ice’s slow burning infatuation with the innocent Morgan.
Starset - My Demons
Nonpoint - Breaking Skin
Devour the Day – Respect - Ice isn’t the sort of man who would trust easily. You’d have to earn that sort of respect by showing him just what sort of person you are. A pushover would never be able to hold the position he holds in the Regulators MC.


Demon Hunter - The Last One Alive – Ice has personal demons that follow him in the form of his dead wife. He’s a haunted man. 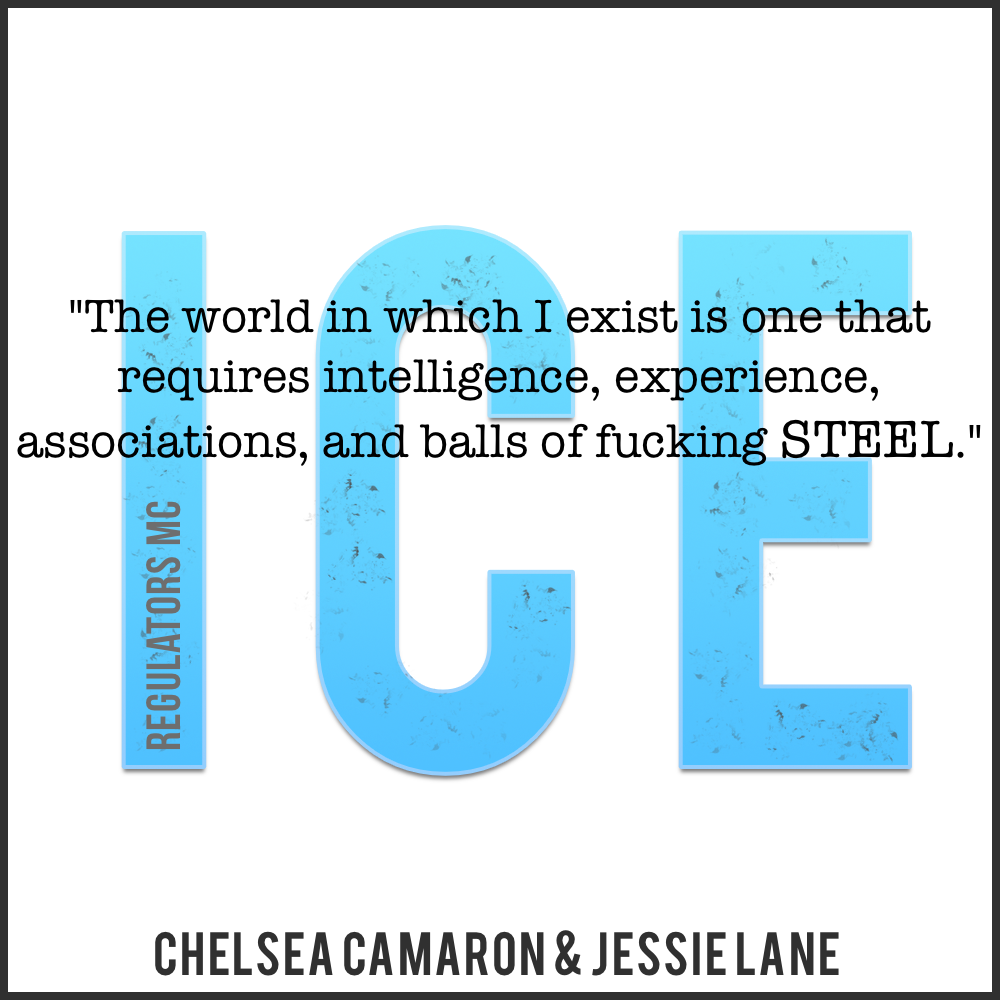 Excerpt:
~Morgan~
Looking at my phone screen, I smile at the text in front of me.
I’m off 2nite. Movie @ ur house or mine?
Texting back, I tell my best friend I will be at her house after work with takeout. It is not often she gets a Friday night off. Working in a bank, I have every weekend off. Casey’s career path is far different than mine, though, and it is one that requires weekend time.
My day drags on as I review current investment portfolios and market changes. I have the best job ever. I get paid to spend other people’s money as an investment broker here in South Beach. My life is sun, sand, and dollar bills.
Before going to Casey’s, I stop by my condo and change clothes. The down side to my job is the stuffy suits I have to wear: reasonable, past knee-length skirts; reasonable women’s dress pants; and reasonable button up shirts. I might hate them, yet in a sad way, the dress code fits my life—reasonable.
It’s not long into girl’s night before the difference in our lifestyle’s show.
“Damn, we’re not even halfway through the first movie, and you’re ready for bed? What the hell? Grandparents stay up later than you,” my best friend wakes me out of my doze.
“Sorry, some of us keep normal business hours,” I joke back.
“Yeah, your hours scream forty-two, not twenty-four, as does everything else in your life.”
“I’m not that bad,” I protest half-heartedly. However, that voice of doubt says “maybe I am.” Maybe my stiff upbringing has rubbed off on me more than I care to admit.
My parents raised me to be an example. As the oldest of three, I had to be the light to guide my younger sisters, Madyson and Mallory. Everything with my parents was about fitting the mold, keeping up appearances. Their brainwashing worked to some degree. Going away to college did nothing for me in my attempt to escape my overbearing parents, either. No, they live in my head, every rule engraved into my brain matter. Too bad no one warned me there is no cure and no escape once they get those rules engrained into your very being.
I am a twenty-four-year-old virgin. A college educated, suit wearing, have my shit together prude. Yep, that’s me. I wouldn’t know what to do with a penis if it was given to me gift wrapped in Christmas paper, and topped with a bow.


Morgan Ann Powell: pathetic, stiff, and borderline pseudo-old lady—that is me. I am, quite possibly, the only woman in her twenties who can count on one hand how many guys she has kissed. I am not cut out for parties, guys, or any wild times, either. My destiny is to be the old lady who lives alone, feeding all the stray cats in the neighborhood.

Facebook | Goodreads | Website | Twitter | Newsletter | Amazon Author Page
Jessie Lane is the best selling author of The Star Series, Big Bad Bite Series and the Ex Ops Series. She lives in Kentucky with her two little Rock Chicks in the making and her over protective alpha husband. She has a passionate love for reading and writing naughty romance, cliff hanging suspense, and out-of-this-world characters that demand your attention, or threaten to slap you around until you do pay attention to them. Jessie writes Adult Paranormal and Contemporary Romance & Upper YA Fantasy/Paranormal Romance.

Facebook | Goodreads | Website | Twitter
Chelsea Camaron was born and raised in Coastal North Carolina. She currently resides in Southern Louisiana with her husband and two children but her heart is always Carolina day dreaming. Chelsea always wanted to be a writer, but like most of us, let fear of the unknown grab a hold of her dream; she realized that if she was going to tell her daughter to go for her dreams, that it was time to follow her own advice. Chelsea grew up turning wrenches alongside her father, and from that grew her love for old muscle cars and Harley Davidson motorcycles, which just so happened to inspired her ‘Daddy’s Girls’ series. Her love for reading has sparked a new love for writing and she currently has a few more projects in the works. When she is not spending her days writing you can find her playing with her kids, attending car shows, going on motorcycle rides on the back of her husband’s Harley, snuggling down with her new favorite book or watching any movie that Vin Diesel might happen to be in. She hates being serious and is still a big kid at heart. She is a small town country girl enjoying life and, Chelsea hopes that her readers remember not to take life too seriously and to embrace your inner five year old, because five year olds know how to enjoy the simple things in life and how to always have fun.