Past My Defenses by Wendy Sparrow with Review 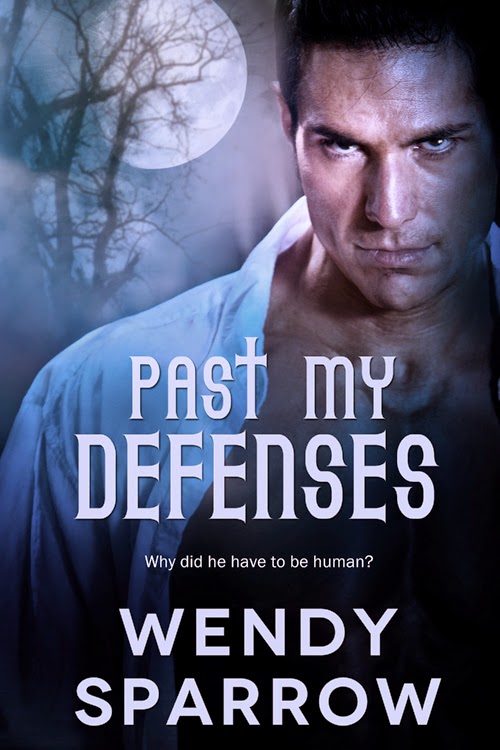 Book Synopsis:
Vanessa is the fastest Lycan around. In wolf form, the only threat she can’t outrun is her allergies. After a feline dander-bomb takes her down, she wakes up naked in a cage staring at a hot park ranger who had no idea what he’d trapped. But ooooh, he smells so good. Mine.
Dane hoped to tame the silver wolf in his kennel, but all bets are off with the deliciously sweet Vanessa on two legs. Her temper makes his pulse race, and he can’t escape the feeling they belong together.

They’re hot as a forest fire even before they scent-match, but Glacier Peak’s Alpha considers Dane a danger to the pack. Meanwhile, Lycans are being poached, and Vanessa has been targeted. Dane will have to keep her close to protect her, but with Vanessa in heat and mad to mate, who will protect him?

Tagline:  Why did he have to be human?

My Review: 4 1/2 stars
This was a funny book, right from the start. I enjoyed reading it, and got a kick out of Vanessa's allergies. Dane was so sweet and understanding, yet wants to make sure that Vanessa wants him for him, not because of hormones. Vanessa just wants Dane to give in and have her way with him. Only problem with that is someone is trying to kill her. Oh, and her Alpha isn't too happy that she's scent-matched with a human. The thing that bothered me about this book was that all the Lycans just expected Dane to understand everything that was going on, but Jordan, the Alpha, had forbidden Vanessa from telling him anything. So I completely get why Dane is holding himself back, while he gets bits and pieces from other Lycans, but not Vanessa. So I can understand his frustration. This was a good story, I loved and hated the end at the same time. I only hated it because of what happened to Jordan. Otherwise, it was a great read, really liked all the characters, and everything moved along nicely.

Author Bio:
Writing is in Wendy’s blood…which is also about thirty percent Mountain Dew and twenty percent chocolate brownies. Wendy has been telling tales since she was a child with varying amounts of success. Her parents clearly anticipated her forays into the paranormal because she heard “The Boy Who Cried Wolf” so many times she could have written the screenplay at age five. She lives with a wonderful husband and two quirky kids and is active in Autism and OCD support networks. She can usually be found on Twitter where she’ll talk to anyone who talks to her and occasionally just to herself.