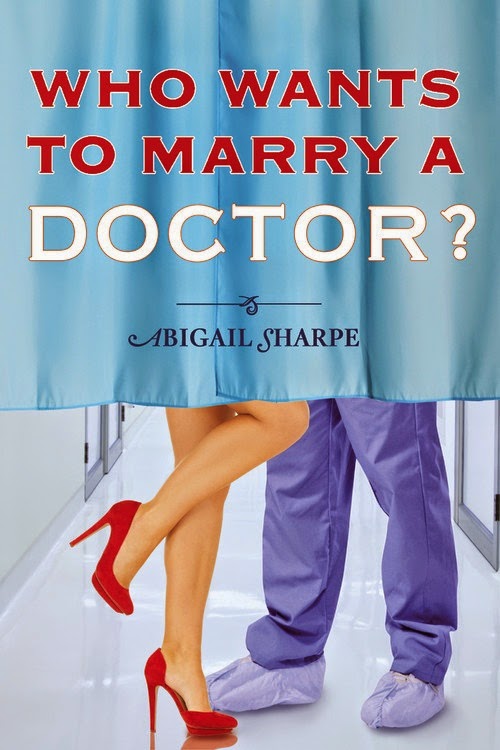 About Who Wants To Marry A Doctor:


As a single mom and pediatrician, Sabrina Bankhead doesn't have time for romance. All that changes when she reluctantly agrees to take part in a dating show fundraiser for a children's hospital. But once she sets eyes on the journalist hired to cover the show, none of the four contestants stand a chance. If she doesn't choose one of the eligible bachelors, the hospital doesn't raise a cent. What's a lovestruck doc to do?


Investigative journalist Quinn Donnelly is on the mend after an assignment in Afghanistan left him both physically and emotionally scarred. Though he's itching to return overseas and finish his story, he'll have to be content with this fluff piece assignment to cover a local dating show. One-night stands are Quinn's forte-but after he meets Sabrina, he's ready to say yes for the long haul. After years of chasing the next big story, Quinn is starting to wonder if maybe home really can be where the heart is . . .

Excerpt:
Shy Ann’s was next in Quinn’s quest to find Sabrina. He opened the door and surveyed the patrons. Sure enough, she sat by the bar, the top of her lovely head barely visible among the crowd. No one sat next to her.
She swiveled in her chair as if an unknown force made her turn around. After a brief second of eye contact, she slowly and deliberately turned away from the door.
A surge of energy passed through him and he marched up to the other side of the bar, away from Sabrina and near the bell that hung over the counter. “Melora!”
The other woman turned at the sound of her name but frowned when she saw who called it. She poured him a Guinness and slammed it down on the counter. “Drink this and go.”
“Melora, I have a problem!”
Instead of ringing the bell and getting the attention of everyone at the bar, Melora turned away and got another drink order. Quinn steeled himself with determination and rang the bell himself. “Hey, Dr. Bankhead! I have a problem!”
The crowd quieted down and every pair of eyes focused on him. Murmured conversations carried through the restaurant, but he held Melora’s gaze. Her angry gaze, with eyes narrowed and lips pursed together. To keep from yelling what she really wanted, Quinn was sure.
“Quinn has a problem!” she shouted through gritted teeth. He didn’t care.
“The doctor is in!” roared the crowd.
“What’s your problem? Asshole.” She said the last part quietly enough that only those around the bell heard.
He took a deep breath. This was it. His one chance. “I’m involved with the smartest, prettiest, funniest woman on the planet. Only something happened and now she thinks I’m the biggest jerk to ever walk the hallowed streets of Harbin.”
“Then I’d say you should cut your losses and get the hell out of our town.”
“I’m not finished. The thing that happened. It was completely independent of anything I did. Only she won’t let me close enough to explain.”
Melora tapped her finger on the bar and shot a look over at her sister. Sabrina shook her head.
“If this woman is as smart as you say she is, then you’re out of luck. The doctor has spoken!”
The crowd cheered in approval, but Quinn wasn’t done. He flipped a nickel in the jar that read Psychiatric Help, 5¢, and rang the bell again. When Melora didn’t turn around, he kept ringing.
“What now?”
The crowd quieted again. Quinn ignored Melora and turned to Sabrina. “I can’t leave it like this.”
Sabrina hopped off her stool and came to his side of the bar amid the hushed whispers of the other patrons. Her lips fixed in a small half-smile and ran her fingers lightly down his chest. Her eyes told him this was not an act of forgiveness but he braced himself for whatever she wanted to dish out. He deserved it.
“Quinn, I believe I act for all womankind when I do this.” She lifted his glass of beer and poured the drink on his head, then shook the remnants out.
The cool shock of the drink was nothing like the ice that replaced the fire in his belly. The crowd quieted down while beer poured down his hair and cheeks and wet his shirt and jeans, eventually dripping to his feet.
“Okay, then.” He held his voice low and smooth. Another bartender tossed him a towel, and he wiped his face, then folded the material neatly and handed it back, his desire tightly reined and shoved into the deep recesses of his soul. “The doctors have spoken!”


The patrons roared and he put a twenty dollar bill in the jar. He left without looking back at the woman who had almost changed his life.

My Review:  5 stars
I really enjoyed reading this book. Abigail gave her characters a sense of humor, made them very life-like, and I loved that. I loved that Sabrina was a hard-working single Mom, who did everything she could to further the hospital where she worked. I loved that she only went into the show so that she could help the kids, not so she could find a husband, cause she wasn't looking. Quinn turned out to be everything that Sabrina wasn't looking for, and same for Quinn. He only took the assignment because he was waiting to be cleared to go back to Afghanistan to finish a story he started and then on to the next assignment. Quinn certainly didn't expect to fall for a Doctor who put her son and patients first, and herself last. He knew that she had been keeping who her son's father was a secret. There is so much chemistry between Quinn and Sabrina, but Sabrina does her duty. She also keeps seeing Quinn after every date. Which leads to some major complications. Then things get further complicated with a new arrival on the show that just blurts out Sabrina's secret and is so unapologetic about it. What a jerk! I loved the way the rest of the story unfolded and the way that people found their way to the truth of what happened and asked for forgiveness - well, some of them anyway. This was such a good book, I'm going to have to go back and read the first book in the series, way to go Abigail!

Abigail is a Boston-bred Yankee now eating grits and saying “y’all” in North Central Florida. She dreamed more of being a stage actress or joining the CIA than being an author. While she still enjoys participating in community theater productions and singing karaoke, the secret-agent career was replaced by hours at her computer, writing stories of love and laughter and happily ever after.
Abigail lives with her husband, two kids, and one crazy princess puppy. She is part of a kitchen blog with friends – chickletsinthekitchen.com – and you can keep up with her on Goodreads or at her website – abigailsharpe.com.