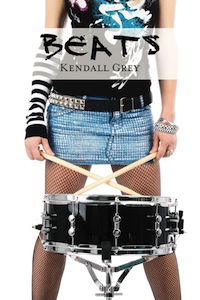 WARNING: BEATS is specially formulated for horn dogs, porn oglers, smut peddlers, BDSM junkies, M/M and M/M/F addicts, DP dabblers, body modification connoisseurs, and lovers of A2M backdoor sexy times. If you don’t fall into these categories, can’t stomach hot man-on-man action, or if you have no idea what the above acronyms mean, please back away from BEATS now. This isn’t the book you’re looking for. Failure to heed this warning could inadvertently throw unauthorized users into a persistent vegetative state, or at the very least, require administration of a defibrillator to the chest and/or groin area. Nobody wants that.
For months, shy drummer Jinx Hardwick has been silently crushing on her tall, dark, and scary bandmate, Toombs Badcock. Drawn to his frightening ink and scars, she yearns to uncover the shadowy secrets lurking behind his silver eyes, but Jinx is too intimidated to even look at him, let alone talk to him. When she stumbles upon Toombs and their manipulative lead guitarist Rax in a compromising position, Jinx realizes her chances of winning Toombs’s heart aren’t just a long shot—they’re nonexistent. To make matters worse, Jinx’s family needs her at home. She’s about to back away from it all—Toombs, the band, her dreams of fame and fortune—when Rax makes her an offer she can’t refuse: a no-holds-barred night alone with Toombs. There’s one small catch. She has to go through Rax to get it.

Kendall Grey is the self-appointed past, present, and future president of the Authors Behaving Badly Club. A whale warrior and indie freedom fighter, she spends summers in the corner (usually with a dunce cap on her head) and winters hunched at the peak of Mt. Trouble, fiery pens of fury (complete with invisible ink) flying across the pages. She has a big set of cajones, and she's not afraid to use them. In her spare time, Kendall speaks your mind so you don't have to.

Kendall lives off a dirt road near Atlanta, Georgia but don't hold that against her.