Catch Your Breath (The O'Learys #4) by Shannyn Schroeder with Giveaway, Excerpt & Spotlight 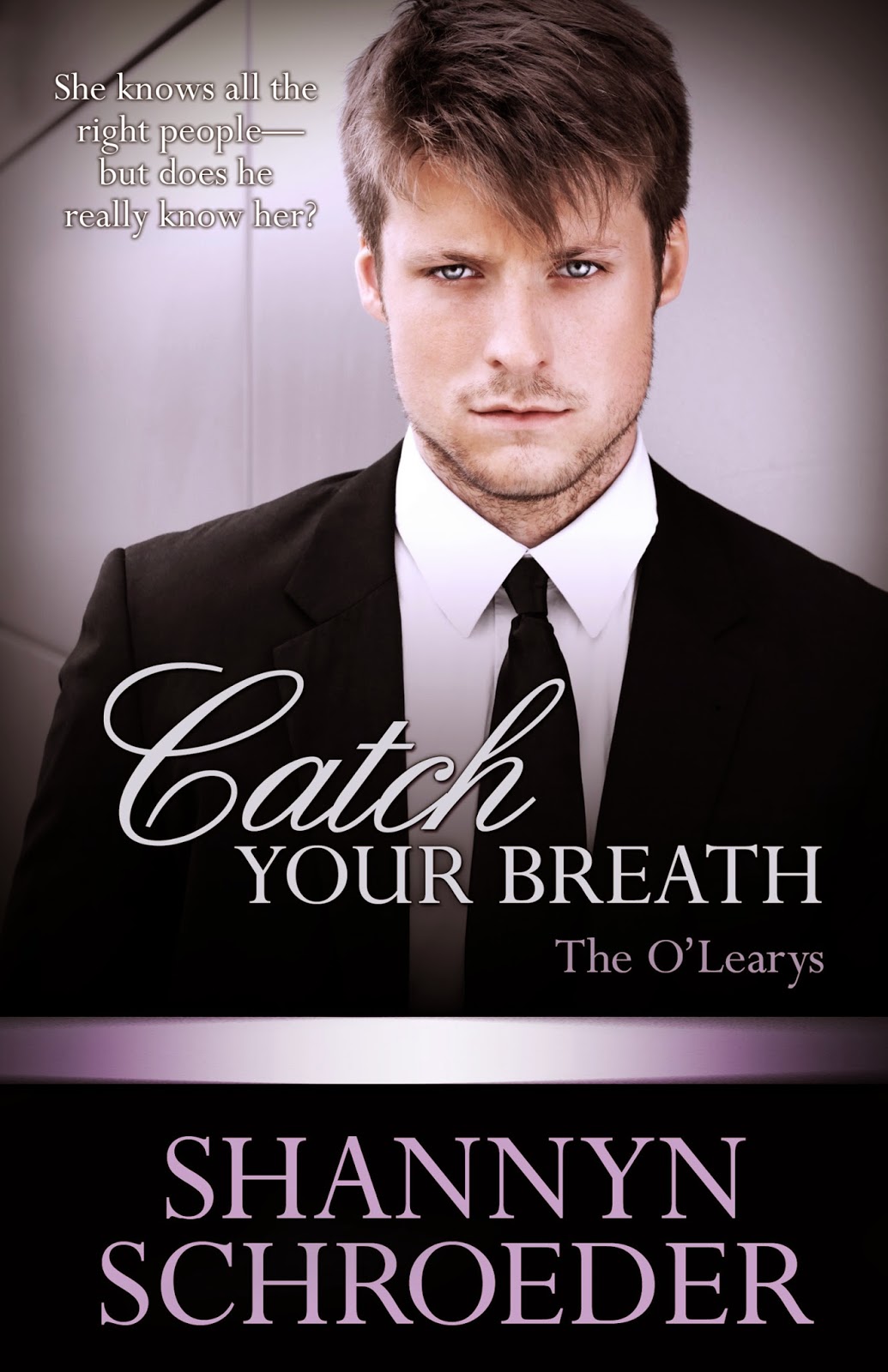 Blurb
As kids they steered clear of one another–but now a beautiful, well-connected reporter and a sexy, driven detective are all grown-up and on the job. . .

Moira O’Leary’s work as a reporter gives her access to some of Chicago’s swankiest soirées.
She knows how to navigate the jet-set crowd, and her style and confidence help her blend right in. But when her childhood crush starts popping up at posh events, her poise begins to falter–until she realizes she has the upper hand in a high-stakes game of secrets and seduction. . .

Jimmy O’Malley has always tried to avoid his friend Liam’s little sister. Something about Moira spelled trouble. But he’s out of his element working undercover in Chicago’s high society, and Moira is his ticket to the inner circle. As sparks begin to fly–and their chemistry heats up–Moira gets dangerously close to his investigation. Will Jimmy be forced to push her away to keep her safe–or will they surrender to a desire that could leave them breathless?

Excerpt
Once Mike was out of earshot, she asked, “What the hell are you doing?”
He glanced over his shoulder at the number of people still milling around. He grabbed Moira’s elbow and guided her farther away.
She struggled in his grasp, which caused her dress to gap and then tighten in all the places that shouldn’t draw his attention but did.
“Let go of me. What are you doing?”
When they were safely ensconced in shadows, he released her. “I was going to ask you the same thing.”
“I’m doing my job. Same as you.” The moonlight peeking through the foliage made her white skin glow. Her chest rose and fell fast; he knew she was getting wound up.
Well, so was he. “Your job is to flirt with every single guy you come across?”
“What do you care who I flirt with? You barely like me.”
Why did she keep going there? “I told you I like you just fine.”
“Funny way of showing it. You ruined a nice walk I was having with Mike. I don’t need another big brother. I’ve got that covered.”
He wasn’t looking at her like a little sister right now. In fact, he was having a hard time remembering she was a little sister. “You’re making me nuts. What are you trying to do?”
She sighed heavily and leaned against the rock outcropping behind her. “My friend Kathy—”
“Hendricks?”
“Yeah. She pointed out that the events I attend have plenty of bachelors.”
Christ. She was taking dating advice from Hendricks? The woman briefly dated Kevin, which didn’t say much about her taste.
“Then something you said the other day stuck with me. Remember at the block party, you mentioned kissing every guy possible to find the one who would set off fireworks? Well, that got me to thinking. Maybe I was being too selective in trying to find the right guy. So I figured I’d give it a shot. It shouldn’t be a conflict of interest if I don’t write about the guys I date. And I might be able to find the one to make my toes curl—”
He lost the ability to think. Dropping his coat, he pushed against her, one hand bringing her hips toward him. He braced an arm against the rough rock to keep balance as he lowered himself to align his mouth with hers. His movement caused blessed silence from her except for a quick, sharp intake of breath.
God, she tasted just like he’d always imagined: like sweet sunshine and smiles. Pushing his tongue into her mouth to seek out hers elicited a moan from her, and it made him want to take more. His hand traveled up her back, pushing her more firmly against him and the softness of her chest pressed against him.
As her arms twined around his neck and her fingers rubbed his head, he could’ve sworn that he did indeed see fireworks. Like some damn kid.
He nipped her full lower lip and was about to dive in for more when the sound of laughter behind them caught his attention and he remembered where they were.
Shoving away as quickly as he’d moved in, he mumbled, “Fuck.”
“Not quite, but that was a hell of a start.”
He heard the smile in her voice, along with a hint of I told you so.
He took a full step back from her. “I’m sorry. That shouldn’t have happened.”
“Just what every girl likes to hear after being kissed senseless. Why not?”
“You mean besides the fact that you’re Liam’s little sister?”
“Definitely besides that. Liam doesn’t decide who I date, much less who I kiss or sleep with.”
He couldn’t think about her kissing or sleeping with anyone right now, even him. Especially him. “I’m supposed to be married, remember? Fuck. I don’t know how I let you do this to me.”
“So sorry to be an inconvenience.” Her voice didn’t hold an ounce of apology.
“I need to get back to the party.”
“So do I.” She took a few steps away from him until she stood in a pool of light. Her skin continued to glow and her hair was still in place, but her face was flush and her lips kiss swollen. “I’ve had some interesting conversations. You know, if you tell me what kind of information you’re looking for, I can probably find things out for you.”
Fury crept in quickly and he grabbed her elbow. “Stay out of my investigation.”
“I’m a reporter. I ask questions. It’s what I do for a living.”
“I’m not kidding, Moira. Stop playing Lois Lane. Leave it.”
Again with the snort. “If I’m Lois, it makes you who? Superman?”
“We don’t know what we’re dealing with. You’ll get your damn story. Stay away from it.”
“Whatever. I have people to meet.” She turned away to leave again.
“No more men tonight, Moira.”
“We’ll see,” she said without turning around. And he was certain she added a bit of sway to her hips just to make him crazier.

My Review: 5 stars
This is the first book that I've had the pleasure of reading from Shannyn. Needless to say, I will be going back at some point to get the rest of this series. It is awesome! I love Moira, she's fiesty, independent and doesn't back down from a challenge. Jimmy is the man that Moira's been in love with since she was 10. They grew up across the street from each other, and both of them have been fighting what's between them for a long time. They both thought they'd moved on until the case that Jimmy is working in brings him into Moira's beat. She's now a reporter, and she reports on a lot of different things in the city. She helps Jimmy and his partner, Gabby out with their undercover work. Although she doesn't know it, when Moira starts investigating something she thinks is unrelated, it puts her in harms way. Jimmy meanwhile can't fight his attraction to Moira anymore, and gives in. Their chemistry is fantastic. There are some twists, unexpected WTH moments and two large families to contend with, but this is one you won't want to put down until the end. Soooo good.
Author Info 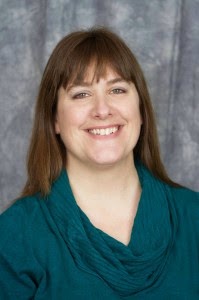 Shannyn is a former English teacher, who now works as a part-time editor while raising her three kids.
Even though she wrote from high school through college (mostly poetry), she’d never considered a career as an author. Writing fell by the wayside as she focused her energy on creating lesson plans and new and fabulous ways to torment her teen students. One group in particular dubbed her “The Torture Master,” a title she carried into motherhood.
After the birth of baby number two, Shannyn resigned from teaching and fell in love with reading romance novels. She read so many books so quickly that her husband teased, “If you’re going to read so many damn books, why don’t you just write one?”
So she did.
That first book is safely buried on her hard drive, but the process set Shannyn on the path to where she is today—agented with a debut ebook coming out with Kensington in late 2012.
She is recovering from her Diet Coke addiction, fears putting her foot in her mouth on social media, and has a renewed appreciation for the bad girls of the world.

Rafflecopter Giveaway
($10 gift card to Amazon or B&N, a digital copy of one of the first 3 O'Leary books (More Than This, A Good Time, or Something to Prove) or Three Swag packs including: Keeper Kase with signed cards, O'Learys bottle opener, and O'Learys post-its)