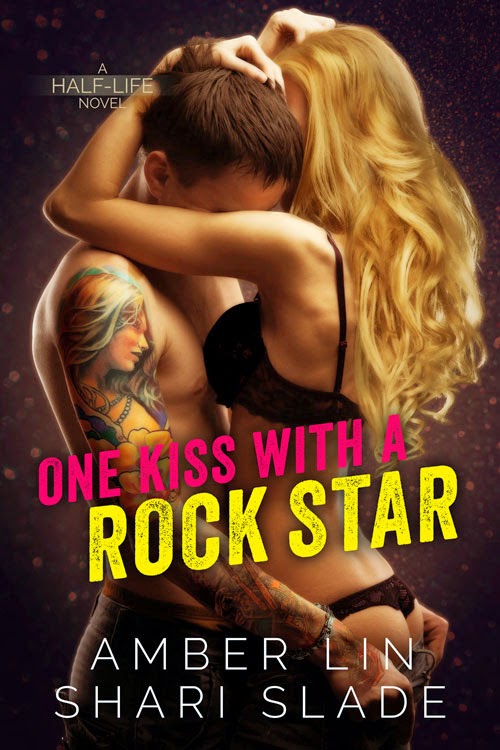 Blurb:
Half-Life bassist Krist Mellas is caught in a PR nightmare after his dirty sex video blew up online. His agent has the solution: a fake engagement with sultry pop princess Madeline Fox. Krist can’t think of anything worse than a charade with the bubblegum bombshell…except losing the band.

Madeline knows better than anyone what it means to live a lie in the spotlight. She’s determined to help Krist without ever letting him find out what it costs her—or about her girlhood crush on him. But after a smoking hot back alley encounter with him leaves her breathless, she can’t deny she wants the snarling bad-boy rocker.

In a world of glitter and diamonds where the kisses are fake but the climaxes are real, their facades start to crack. And the publicity storm may shatter them both.

He couldn't miss them. She was naked but for feathers and glitter. Untouchable. Two grips ushered her along the catwalk and affixed her harness to a rig in the rafters. Krist was only a few feet off the ground on his platform, but he still felt unsteady. She was so high.

An assistant counted down, and the director shouted, “Action!”

The army of dancers below writhed to the thumping bass line of the guide track, feet pounding the floor, but Krist only had eyes for Madeline. She lifted her arms above her head like the ballerina in a little girl’s jewelry box, stepped off the ledge, and twirled down, singing.

All the dancers below lifted their hands in unison and swayed like the collective force of their will would boost her higher. Cheesy pop bullshit, but something about it worked. He didn’t want to admit it, but she had…something. She could fucking sing.

Her descent slowed. If he stretched, he could just reach her perfectly manicured toe. Almost time.

His whole body tensed as a camera swung in his direction. He grimaced and gripped the railing when the platform beneath him, mounted on what looked like a cherry-picker truck, shifted closer to Madeline. The cameraman gave him a thumbs-up. He must look sufficiently demonic.

Now. He reached for her, grabbing her by the waist, the only part of her body unadorned, and pulled her close. One breath and he was overcome by her scent. Spicy cotton candy. Unexpected and strangely perfect. A second breath and he prepared to do his damned job, to mash his lips against hers and fling her back to her adoring throng. It was only skin. It didn’t mean anything.
Her eyes flashed mischief. Hi, she mouthed and hooked her legs around his hips.

He froze. The producer hadn’t mentioned grinding in the rundown earlier. She shimmied against him, and his traitorous cock responded. Do the job you came to do.

Before he could, she bent her head and stole the kiss he’d been hired to deliver. He couldn't help but gasp, and then her tongue, warm and electric, invaded his mouth. Chai.

Could an angel corrupt a devil?

“I am falling. I am falling.” The guide track looped in the background, distorted by Auto-Tune, hardly recognizable as the sultry voice he'd just heard.

It was too much. The wet heat, her teeth grazing his bottom lip, and the way she rocked against his crotch. It hurt to touch her, just like the devil was supposed to react. He pushed, but she only held on tighter, digging her heels into his ass, twisting his hair in her fingers. Sparks of pleasure-pain skittered under his skin. She’d chosen him.

He didn’t want to want her. Wanting was a one-way ticket to disappointment.

She raked her fingers down his back, teasing the sliver of skin between his shirt and belt, and pressed her mouth to his ear. He shivered.

“Work with me.” She nipped him.

He could work. And if his body responded? Well, it was only biology. The hard-on straining against his zipper was as manufactured and packaged as the Dream Angel in his arms.

He lost himself in the pull and sway, forgot the crowd of people, the camera, the job. Forgot everything but the taste of her, the feel of her tight muscles under his palms, the tickle of feathers floating free.

He kissed her back, violent and hard, reclaiming what she'd taken: his choice. Her body softened, melted around him. She moaned, giving in, an unexpected surrender. He hadn’t missed the power she wielded over the whole production, a queen bee to her hive. But here she was gasping and shuddering in his arms, the rapid pulse against his chest like wings beating against glass. He ran his tongue along hers, savoring the honey and spice.

A sound came from the sides, an urgent whisper. They wanted him to stop. He even felt her lurch away, tugged by mechanical means, but he held tighter. They’d have to tear her away. They’d have to hurt her to do it. For one brief moment, he wasn’t letting go. Skin to skin, mouth to mouth. Heat to heat, and they’d both flown too close to the sun.

He pulled back, breaking the kiss, but not the connection burning between them. “Why me?”

She blinked, hazy with lust. “Because you're the demon.”

That's my motivation. “No, why did you want me for this set. I know you did.”

He needed her to say it out loud. Because you owe me. Then he could be done. Then this could be filed away as one more task completed, one more favor repaid. Then he could ignore the sweet ache he felt at the thought of letting her go.

My Review: 5 stars
Bloody fantastic second book in the series. I found this to be a very compelling story. I liked that they went into the back room bull shit that stars - whether they're rock stars or pop stars or actors - have to deal with. I didn't care that Krist was bisexual, not in the least. It didn't bother me that Maddy was either. I felt badly for Krist because not only did ne get the shaft from the others in the original situation with him, but he just kept being kicked when he was already down. Didn't like that at all. Maddy, that girl was fiesty and she kept in all going in the direction she wanted to go in. By the end of the book both Krist and Maddy had been through a lot - together. Initially, not by choice, but by the end, very much by choice. I loved every single word of this book. The characters were fantastic, compelling and sometimes all too real and vulnerable. Amber and Shari are a formidable writing team. They write so very well together. I really am hoping for more, not only in this series, but from Amber and Shari together. 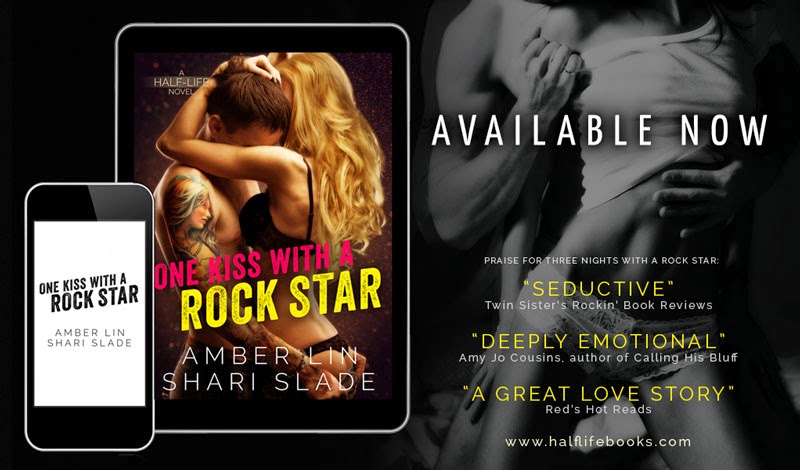 To stay up to date with upcoming releases, sign up for her newsletter.

Shari Slade is a snarky optimist. A would-be academic with big dreams and very little means. When she isn’t toiling away in the non-profit sector, she’s writing gritty stories about identity and people who make terrible choices in the name of love (or lust). Somehow, it all works out in the end. If she had a patronus it would be a platypus.

Sign up for her newsletter to stay up-to-date on all the latest releases, happenings, and events. 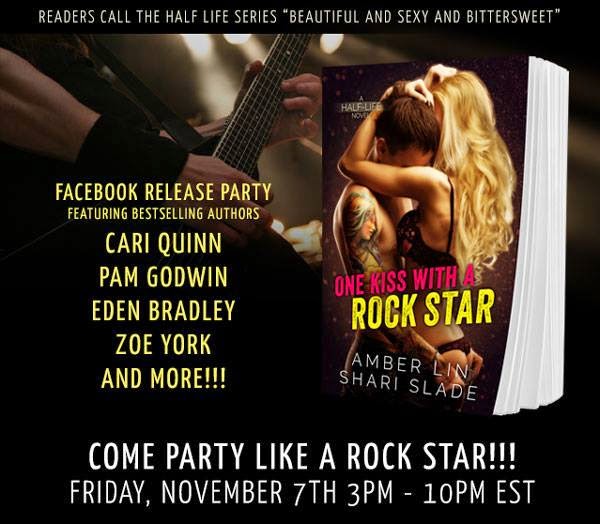