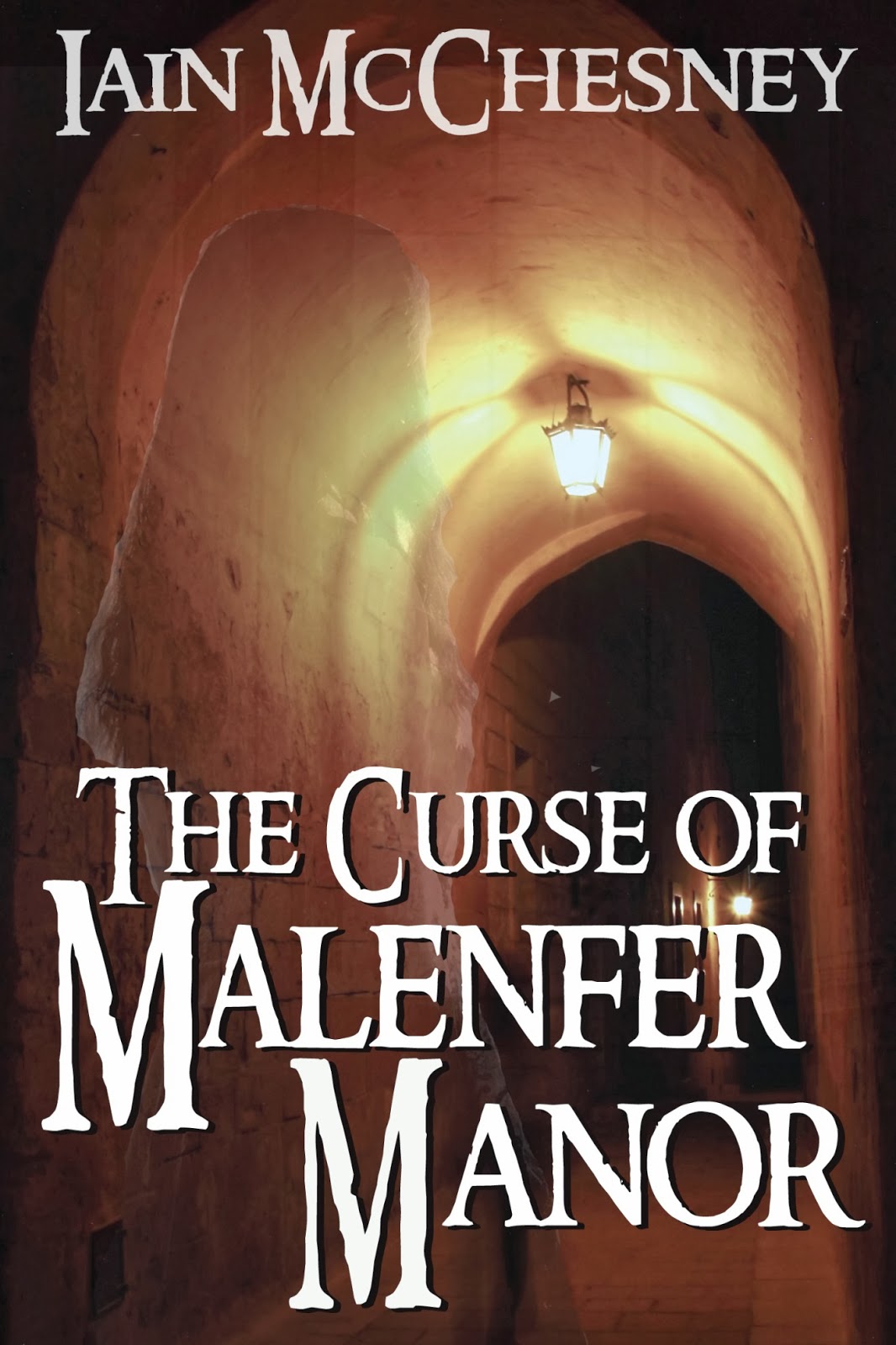 Those in line to the Malenfer estate are succumbing to terrible ends –is a supernatural legacy at work, or something entirely more human?

Young Irish mercenary Dermot Ward retreats to Paris at the close of World War I where he drinks to forget his experiences, especially the death of his comrade, Arthur Malenfer. But Arthur has not forgotten Dermot. Dead but not departed, Arthur has unfinished business and needs the help of the living.

Upon his arrival at Malenfer Manor, Dermot finds himself embroiled in a mystery of murder, succession, and ambition. Dermot falls in love with the youngest Malenfer, the beautiful fey Simonne, but in his way are Simonne’s mismatched fiancé, her own connections to the spirit world, Dermot’s guilt over the circumstances of Arthur’s death… and the curse. 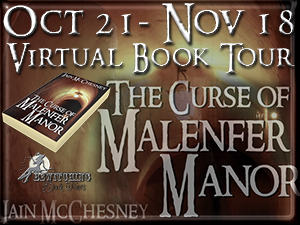 On the way to Montmartre, halfway up the Rue des Trois Frères, is a small tight lane to the left. It is poorly lit and uninviting and not obvious to the passerby. If you did manage upon it, you would have to follow it trustingly, for it gives no hint of a thoroughfare, but it would soon reward you and open out, delivering you into a pleasant courtyard.
This cobbled, treed oasis was the home of an old long-established brasserie – Le Jardin des Cygnes. When the weather was good, life took place under the shading poplar branches around the white painted tables of this garden of swans, but in February its patrons stayed huddled and bundled, comfortable behind stained glass doors. There they nested, warm and dry, waiting for spring’s migration.
In the center of the café window hung a large cured ham, smoked in acorns. Propped against it, a dusty chalkboard showed the day’s menu written out large. There were gaps in it, like missing teeth, where popular fare had sold out. And there were two flags, both tricolors, hanging limp in the absence of a breeze. One was most familiar: the blue, white, and red of the French republic, though this specimen had its colors washed soft by time, its cloth worn nightdress-thin. The other flag was new and bright, its fresh dyes almost wet: an independence flag for a pregnant nation, one conceived but not yet delivered. The green, white, and gold of an Irish Free State hung presumptuously from its lanyard.
A local would have noticed Paris was suddenly full of such adornments, totems of petitioners to the battered colonial powers. This new trade in patriotism could be seen almost everywhere; it had arrived in the night only weeks before as the delegations drew nearer. It had started before the appearance of David Lloyd George, Britain’s Prime Minister, who was soon joined by President Thomas Woodrow Wilson, who had sailed from his native Virginia. France’s Clemenceau, the host of the Peace Conference, was flanked by a sizeable contingent, as if in scale he might overawe the charisma of Orlando the Italian. The victors were all now settled in town and eager to slice up the cake.

Why was he so sure, Arthur asked of himself, that Dermot was somewhere near? But was this not Paris and 1919, was the world not gathered today? Everyone to see empires carved up as the treaty was inked at Versailles. History was being made, Arthur conjectured, and Dermot would surely be drawn. He’d fly like a moth to the radiant flame of intrigue and prospect and hope.
Arthur pressed forward in his search for Dermot, now in its fourth day since his arrival, his own sobriety increasingly at odds with the scenes he had encountered. Things had got worse as his route climbed into the hill that was Montmartre. With each step he fought the despondency that grew with the prospect of failure. He had been walking for almost fourteen hours, and the confidence of a noonday sun had dipped with the fading light – doubt had long been plaguing him; it gnawed like a boneyard dog.
What if Dermot died in the war, one amongst the many? Maybe he was wounded and sent home, or he languishes still in a hospital. He could have stayed on with the regiment? It’s not a far-flung idea. He could be anywhere, even gone home, so why am I searching today? Am I wasting time and hope on a friend I don’t know even lives?
But no, Arthur decided. If Dermot was still alive, then he would be here, somewhere, right now. The friend he remembered was a man who could not settle down, a man in search of an elusive peace beyond the conflict of nations. Paris was an island where the flotsam and jetsam of humanity washed ashore. Where a man like Dermot would surface.
Arthur turned left into a narrow alleyway to avoid a ribald group. Drawn onwards by the lilt of music, he continued up the lane. At the sight of a pair of hanging flags and the sign of the hissing swan, Arthur felt as fresh and hopeful as when he’d stepped down from the train.
~~~

A long wooden counter along one wall served up drink to the crowd in the brasserie; here, upstairs, they had the seclusion to indulge in the forbidden drink despite its prohibition four years prior. Wine and beer could be had in the main room, spirits too, or coffee. But if you were known or invited and vouched for, the Swan would admit you back here. A museum of bottles terraced the back, stacked from the till to the ceiling. At its apex hung a tarnished silver tray. It was nailed securely to the beam to fend off boisterous pilferers. It bore an inscription in painted rhyme that Dermot had committed to memory:

Here can be found the men serving absinthe;
Alchemists pour the green into tumblers;
Crowned with a spoon, plated in silver;
One cube of sugar suspended o’er each.

Queued aproned waiters hoist jugs of iced water;
Assemble their trays of lime-colored cordial.
Ethereal creatures, procurers of promise;
Melt round their patrons; together the host!

Dermot loved the enthusiasm of it – Together the host! His people. Exactly. Why would they ban something so good? Not that it did them any good. The dwarf returned. Dermot took two glasses from the attendant Maximilian and settled his account with loose change. Each tumbler held a single finger of absinthe, the color of a rank algae bloom. With a practiced hand Dermot emptied one into the other – the twixt into the twain – and returned one empty glass to the tray. The Anjou waiter knew his customer’s habits and departed following this exchange.
Dermot reached for the jug that bore the ice and topped up his glass with chilled water. The next part he did very slowly. It was the drip, drip, drip he liked the most – a hypnotic dissolution – the sugar cube crumbled and ran through the holed spoon and mixed in the bottom of the solution. It was sheer chemistry. A science of the impossible. Numerology and divination. The mystery of relative gravities. The Philosopher’s Stone in a glass. The color now swirled, thickened and clouded, and spun milky and turgid before him; he watched while the louche effect gradually evened and the potion he’d brewed came to settle. For Dermot, it was like watching a mind churn an infinite computation and decide on a definitive answer. Here was the certainty and the peace of escape. His mouth began to salivate.
“To alchemy.” He raised his glass in a toast to the Fates, and then put his lips to the welcome cold rim.
The cut of alcohol kicked in sharply, a punch behind his ear. The ice water and sweetener was an antidote, and enabled his palate to take the aniseed. A rush of blood surged through his limbs, and his mind slipped from its leash. With the tremulous pleasure of anticipation served, the café faded away. Dermot’s head flopped to the side and he gazed through the colored glass window.
How long had he sat that way? When he looked back on it he could not say. The light at first drew his attention because it appeared strange, clustered as it was around the tree. Dermot pressed his face to the window and squinted to make his view clearer. It was there all right, sharper than before, and the figure began to take shape.
“Jesus Christ!” he exploded, startling the table from its nuptials.
A dish of oily fish was knocked and spilled. It soiled the laughing woman. “What the hell’s the matter with you?” The two men helped to brush her down, which led to lots of slapping.
“I just saw someone,” Dermot explained, putting his hand to his head and wiping a clammy brow.
The drinkers, recovered, laughed at him then, the three of them joined in the joke.
“Feeling all right over there?”
“Back with us, Irish?”
“Want to cut that green stuff out.”
Dermot felt a pall of fear, but he chanced another glance. The man he had seen was nowhere in sight. The tree in the courtyard was alone.
“What’s the fairy brought you tonight, then? What’s hiding there out in the shadows?”
The green fairy. The gift of the absinthe. A foot into another world. Dermot had heard of hallucinations before, but nothing like this had happened– yet the vision had looked so real. Dermot drew his hands to his lap, conscious that they were shaking.
“I just saw a man,” Dermot confessed. “He was a friend from long ago.”
“Then bring him in. What’s all the noise for, Irish?”
“The man I saw died in the war.” 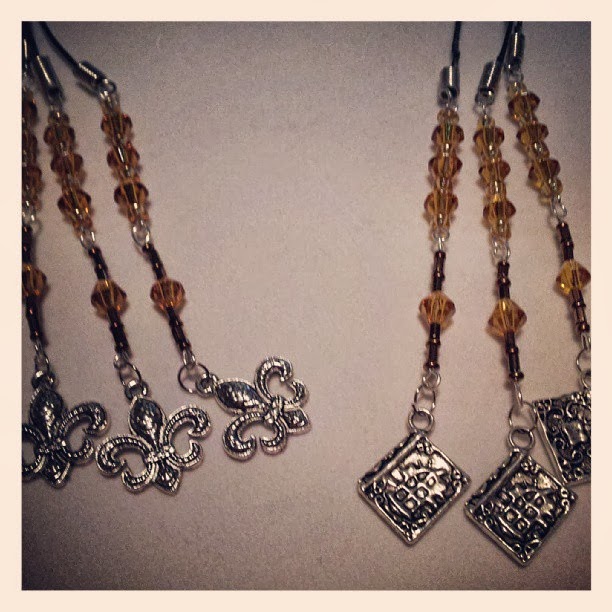 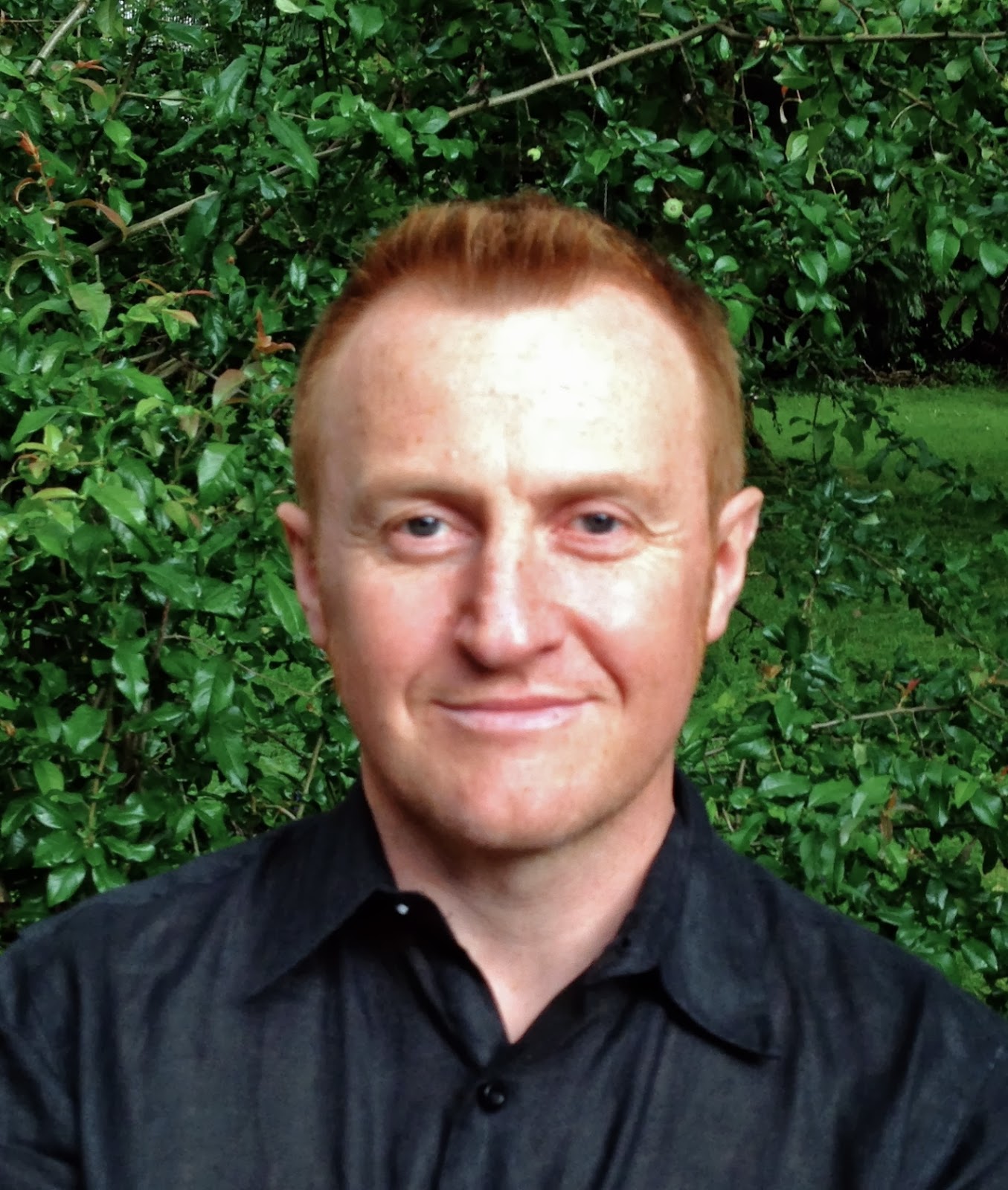 Iain is a writer of gothic mysteries.

He was born and raised in Scotland. He studied History and Geography at the University of Glasgow.

The World Wars left Iain’s family with generations of widows. As a result, Iain has always been interested in the tangible effects of history on family dynamics and in the power of narrative to awaken those long dead. For the characters in The Curse of Malenfer Manor, he drew on childhood reminiscences and verbal family history—though he hastens to add that his family had barely a penny, far less a
manor, and any ghosts dwell only in memory.

He lives in Vancouver, Canada, with his wife and two children.