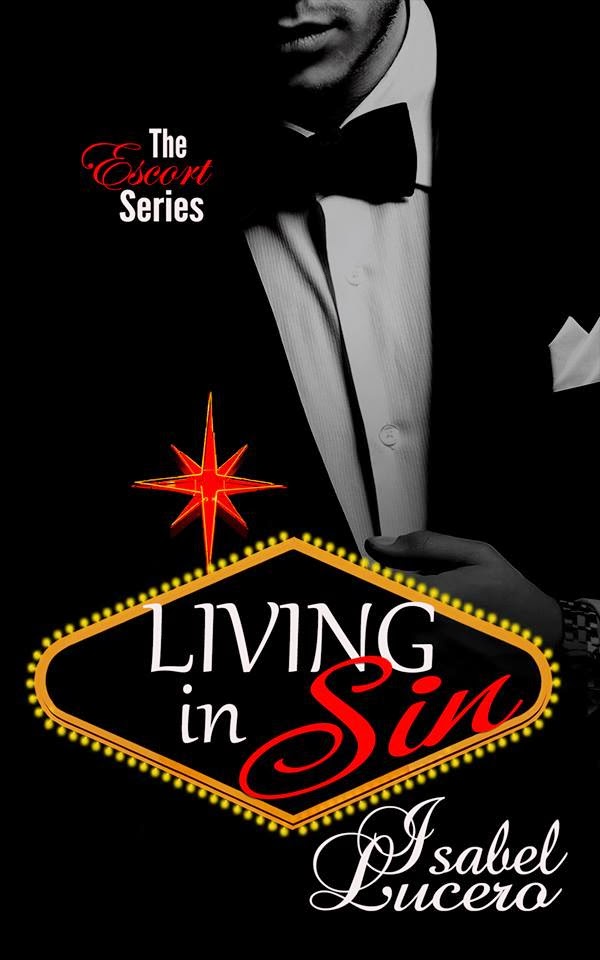 Jace Jamison is every woman’s fantasy. He’s a mysterious businessman willing to sweep you off your feet, a tattooed bad boy from the wrong side of the tracks, and a sexy friend you want to take that next step with. Jace is everything and anything you want him to be. He’s a highly paid escort.

But nobody knows who Jace really is; the man whose dad abandoned him, whose brother was killed, and who had to take care of his mom at a young age. At the age of nineteen, he was living in Sin City, ready for a life away from stress and struggle.

Adrienne has been having a sexual drought since she broke up with her boyfriend. Even then she wasn’t getting fully satisfied. Being an event planner, she’s constantly working at numerous events. Several times she’s seen a man she can only refer to as the God-like creature at her work functions. He’s devastatingly handsome, tall, and has beautiful eyes, but he’s always with a different woman. The last thing she needs is another player in her life.

After a few chance encounters with Jace, her best friend convinces her to just get some good sex out of him and not worry about who she’s seen him with. But what happens when she finds out that he isn’t dating these women because he wants to, but because he’s paid to?

Keeping his job a secret from Adrienne seems easy at first, but when she begins meeting people he knows in his escort life, and they begin getting closer, he knows he has to tell her before someone else does.

When their worlds entwine, and confessions are made, will they be able to work through it? Will she be able to push aside his sins and focus on the good in him? Will Jace get what he’s never had? A woman who wants him despite what he’s done. Or will living in sin cost him what he never knew he wanted?

It’s been almost two weeks since I’ve had the best sex of my life. I thought fucking him would settle a craving, and I’d be good to go for a while. Instead, it awakened a sexual beast that I had living inside of me. It’s all I think about now.
Sex.
I want it.
I need it.
I fantasize about Jace and his huge hands doing wonderful things to my body. I can still remember the way his tongue felt as he slid it into my pussy, and the warmth of his mouth as his lips encircled my clit. I was sore for days. My entire body ached from the pounding he gave me. I’ve used my fingers and my vibrator, and neither one will do. I crave his body like a pregnant woman craves pickles and ice cream.
How can I tell him that I want to use his body for my own pleasure? What would I even say to him? I’ve never had to chase after a guy. I haven’t asked anybody out on a date, haven’t initiated the first kiss, and certainly haven’t asked anybody if they want to be fuck buddies. I just can’t do that. Plus, I have no idea how to get a hold of him. I only know where he lives, and I definitely won’t be showing up to his suite like some sort of stalker psycho.
I groan and force myself to get out of bed. Before I make it to the bathroom, my phone vibrates on my nightstand. It’s Em.
“Hello?”
“Wake up, we have plans,” she says excitedly.
“Ugh. No. I can’t deal with your happiness right now.”
“Too bad. Get up because we have places to be.”
“How come I never know about our plans until the last minute?”
“I don’t know. I’m on my way over. It’s already ten, so stop being a lazy bum.”
The phone clicks and I go use the bathroom, brush my teeth, and pull my hair into a messy bun on top of my head. I put on some shorts, flip flops and a white tank top. By the time I’m dressed, I hear Em banging on the door like she’s the cops.
“Hey! Why are you trying to break my door down?” I say as I pull the door open.
She gives me a shrug. “I thought maybe you had gone back to sleep, so I was prepared to wake you up.”
“Well, I proved you wrong. I’m ready and everything, see?” I say, extending my arms and showing her that I’m dressed.
She eyes me with a disgusted look on her face. “If that’s what you call ready. It doesn’t matter anyway. We’re going to go get pampered. Nails, hair, waxing.”
“Waxing?” I say, interrupting her. “I think I’ll pass. Last time you convinced me to get waxed, my hoo-ha was sore for days! No thank you.”
“Stop being so dramatic,” she laughs. “I’m sorry. Last time the chick was new. This time, it won’t be the same one. I promise. We need to go get prettied up, go out to dinner with these two, hopefully-not-lame bitches, and then hit a club up and find some sexy men to dance with. That’s the plan.”
She says the last part with finality, flips her hair over her shoulder and walks towards out door.
“I guess I could use a few drinks,” I say, following her down the hall.
“Still not over the king?” she asks with a laugh.
“Oh shush,” I say, playfully pushing her.
“Hell, from what you told me, I wouldn’t be over him either. I’d be scaling the building trying to get to him.”
A loud and embarrassing laugh escapes my throat. A few people nearby all turn and look in our direction. Ignoring the stares, I continue to laugh. “Oh my gosh, Em. You’re too much. I picture you climbing the building like Spiderman and shit. Oh God, that’s too funny,” I say, unable to stop my laughter.
“You think I’m playing. I’d be camped out on that balcony waiting to pounce him.” She lets out a small laugh at herself. “I think you’re crazy for not wanting to be with him again. You said yourself he was amazing in bed…and huge! It’s not like you’re getting any elsewhere.” She gives me a pointed look.
“Well, thanks for reminding me,” I say and roll my eyes. “I don’t know what you think I’m supposed to do. I don’t have his number, and showing up to his place would be desperate and sad. I won’t do that.”
Emilie lets out a dramatic sigh. “Whatever. Guess you’ll have to find you another man tonight. He probably won’t be God-like, or be as good in bed, or have a huge…”
“Okay!” I say, interrupting her sentence. “I get it. Let’s just go.”

What a fantastic book! I loved that it was from both Jace and Adrienne's points of view, alternating. But I really loved that it was about a relationship that started when no one thought about it. Sometimes, all it takes is one look and you're interested. That's how this all started. I thought it was funny that Adrienne didn't even look up to see who helped her get out of the cab, and then Jace's reaction just made it that much better. I really liked Jace, despite or maybe even in spite of what he did for a living. People gotta pay bills all over, and if other people want to pay you to spend time with them? That's really a no-brainer. A little different for a guy than a girl, just because of the way that society is. But I'm sure that those three weeks that he didn't see Adrienne after their night together drove him crazy with insecurity. I've got to say that she took things better than expected, but only because I think she was already starting to put the pieces together. I really liked that Jace was honest with Adrienne once she found out what he had done for a living, and I liked her even more for being willing to see things from his perspective once she had a chance to calm down. Speaking of honest, when Jace was telling Adrienne how he felt – that was fantastic for a guy to do. Just lay it all on the line. I can not wait for the next couple of books in this series. Isabel wrote some scorching love scenes that were so freaking hot, amazing and just what every dirty girl loves to read. 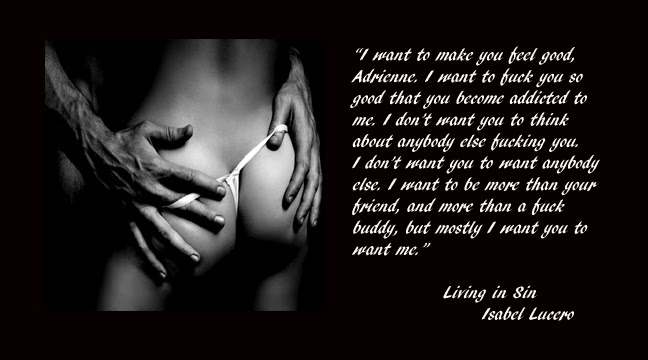 Isabel Lucero is a military wife who has been lucky enough to travel the world, and see some amazing sights. She has been married to her best friend for ten years, and together they have two of the most beautiful children in the world. She and her husband are Junior High Sweethearts, a couple who are truly meant to be togethe. One day, their love story might make it into a book.
Isabel is the middle name of the author, and Lucero is her maiden name. Together they create her pen name. She was born in a small town in New Mexico, and was more than happy to move far, far away. She is a collector of high heels and tattoos, and is highly obsessed with both. She owns a crazy, little Miniature Pinscher who thinks he's a Doberman. His name is Tyson.
Isabel has always been an avid reader, able to devour books in a day or two. With her now focusing on writing, the reading has slowed, but her love for reading is still there.
Something noteworthy is that Isabel loves to hear from her readers. Never hesitate to get in touch. She's always willing and ready to talk about anything. If you enjoyed this book, she encourages you to not only let her know, but let the world know. Goodreads, Amazon, book blogs, groups, etc. She understands that word of mouth is the best form of promotion. 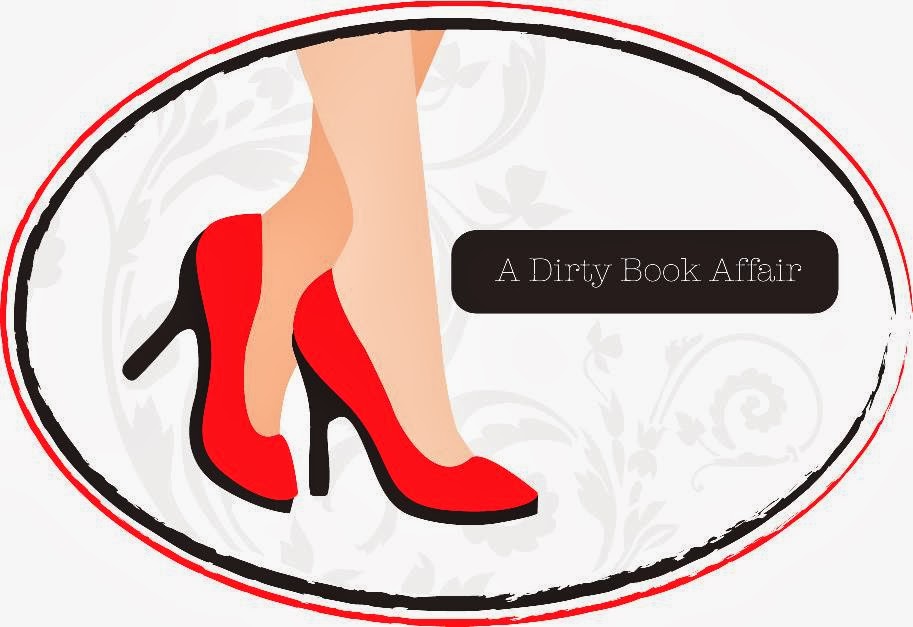