Another Shot At Love by Niecey Roy with Giveaway, Excerpt, Book Soundtrack & Review 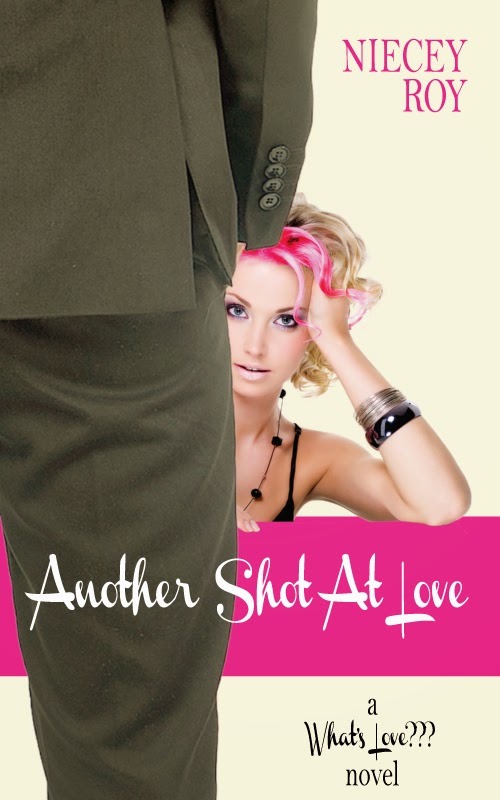 Blurb-
Imogen Gorecki has a problem—her twin sister just got engaged, and guess who’s the best man? That’s right, her scum-of-an-ex-boyfriend whom she caught cheating with a bottle-blonde, with fake breasts and a stripper’s flexibility. There’s a disturbing possibility her eyes will never recover.
Gen needs a date for the engagement party, but finding Mr. Perfect in a time crunch is proving impossible. Just when she’s about to give up, she face-plants into the crotch of the sexiest guy she’s ever met.
Matt Sesnick is everything Gen wants in a man —except he’s not interested in a relationship. Can she convince Matt to take another shot at love, or will Gen’s pregnant, hormonal older sister, her bridezilla twin, and all of her past Mr. Wrongs get in the way of their happily-ever-after?
Book Links-
Amazon / Goodreads /Smashwords / Barnes and Noble
"Crazy sisters, best friends, a slimy ex, and a gorgeously sexy sweet man. Who wouldn't want Another Shot at Love?" ~~ Stacy Nickelson, It Started With A Book Blog

Excerpt-
“You really should change that light bulb,” Matt said, glancing around us.
“I know.” I pushed aside my wallet to dig to the bottom of my oversized purse. “I kind of take for granted that this is supposed to be a safe neighborhood.”
“Until an alien abducts you off your poorly lit porch.”
“Very funny.” I glanced up from my purse with a smile. “But really, it’s late. You could have been home by now.”
“Gen, I’m glad to walk you to your door. I would have worried about you if I hadn’t.”
I considered him as we stood there on my porch, the light flickering above us. I didn’t want him to leave, but I didn’t know how to ask him to stay. Maybe I could ask him in for a drink, though I’d already had enough.
But I have those cupcakes…
Yeah. I could offer him cupcakes. They weren’t his favorite, chocolate with sprinkles, but yellow cake with milk chocolate frosting had to be a close second, right? Hadn’t he said a cupcake will fix everything?
“I’m really glad we went out tonight.” His voice made me jump and I dropped the keys. We both bent to pick them up at the same time and bumped foreheads.
“Sorry,” he said.
“It’s okay, I’m fine.” I clasped my forehead and laughed. Probably, I sounded hysterical. Like a rabid hyena. I couldn’t even look him in the eye when I took the keys from him. “Thanks for inviting me. I had a lot of fun tonight.”
“Me too,” he said.
I put the key into the lock, turning it slowly as I struggled with what to do about him and my out of control libido. Unlocking my door hadn’t given me enough time to figure things out, though, so I tried to prolong sliding the patio door open. That didn’t take long either, and I hesitated in the doorway, still unsure. I opened my mouth to ask him in, but nothing came out. So I stepped backward through the doorway, my gaze glued to his. After a moment, he followed me inside, part of his face lost in shadows.
Time stood still. My tongue darted out to lick my lips, and I lifted up onto my toes as he lowered his head to meet me halfway. The smell of his cologne surrounded me and my eyes drifted shut. He grasped me loosely around my back, pulling me close, sending shivers coursing through my body. His breath caressed my skin, his lips just a whisper away from mine, and my lips parted…


With Your Love ~ Cher Lloyd

My Review – 5 stars
This book had me laughing so hard at times, it was awesome. Niecey has created some really great characters in this book and it was interwoven with fantastic story lines so that everyone had something going on. Gen's best friend Roxanne has her own ideas of what should happen with Gen, as does her other sister Catherine. After Gen's break up, they decide she needs to start dating, and set her up on some bling dates. The blind dates turn out to be horrendous, but also extremely funny. The way that Gen met Matt was so embarrassing and hilarious at the same time. Matt and Gen are just amazing together. They are completely honest with each other, and can just be themselves. I really liked that they took their time getting to know each other, hanging out getting to know each other. I loved that Matt came to Gen's rescue when she needed him - before they actually started dating - when they were friends who were still figuring things out. Then her stupid nut job ex decides he wants Gen back, creating a huge issue for Gen's twin, Lexie, who's got her own thing going on. Honestly, there's a lot going on with in this book, and Gen's relationship with Matt just happens to be the front story. Niecey has done a fabulous job weaving all of these different elements into a great book. I wanted to keep reading more. I'm hoping there's more for these characters. I swear, they're an untapped goldmine of hilarity and shenanigans, and many, many more hours of entertainment to be had. Niecey Roy knew she wanted to be a writer from a very young age, but her moment of enlightenment came after watching the movie You’ve Got Mail. It was then she realized her place in life, and happily parked her butt on writing romance. Her dream was to create sexy vixens, hunky, half-naked heroes, and above all, romance; lots and lots of butterflies in the belly, breathless first kisses and happily-ever-afters.
When she’s not at her day job where she works as a legal assistant, she can be found at home at a cluttered desk, pounding her tired little fingers away on a keyboard with nothing but black pepper flavored sunflower seeds and Visine as her weapons for mass-romance-novel-creation. When her fingers need a break, you’ll find her at a table with friends, drinking a few martinis and showing off a new pair of (sometimes ridiculous) high heels. She’s usually the loudest at the table and most often the one snorting with laughter.
Niecey is the author of Fender Bender Blues, a contemporary romantic comedy published by The Wild Rose Press. Her new novel to be released November 2013, Another Shot At Love, is the first novel in the What’s Love??? series.