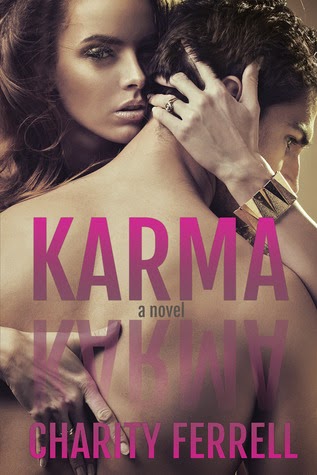 Synopsis:
I’m cursed. Yes, cursed and this isn’t some paranormal fantasy. This is my real life. Karma has decided to last out on me. I’ll never find my true love and I’m learning to accept that. The only problem is; he isn’t. He’s starting a war with karma and everyone knows karma always fights back with a vengeance.

Gabby Taylor is screwed. On her first day at her new internship, she runs into the guy she’s been fighting to avoid. The one guy whose family despises her and she drunkenly gave her virginity away to. And he’s her new co-worker.

She is messing up everything Dalton Douglas has planned. She climbed her way into his thoughts, thrown her bags down and he couldn’t manage to evict her- even if it cost him everything he’s been working his ass off for. The only problem is: she’s fighting him. He will fight to keep her but can he manage to hide his own secrets that would ruin everything between them?

His index finger crept to the side of his mouth. “So let’s get this straight. We fucked then you completely ignored me. No calls, no texts, nothing. Oh, yeah,” a harsh laugh escaped his throat, “you also failed to mention that fact that you were still a damn virgin! But I’m the asshole?”
I nodded, folding my arms across my chest. “Pretty much.”
He tossed his hands up into the air. “You’re fucking unbelievable.”
I wasn’t stupid. I knew the day would come where I’d eventually have to face him. I might’ve been naïve enough to drunkenly give away my virginity, but I wasn’t that naïve to think we’d never see each other again. That’s because I was stupid enough to break the most important rule of one-night-stands: make sure you’ll never see the other person again. I instantly decided I despised one-night-stands. “I was drunk,” I explained, rushing the words out to my bullshit excuse. Jesus, I sounded like a college-girl-who-found-herself-naked-on-the-most-popular-frat’s-couch cliché.
“We were both drunk,” he corrected. “And, correct me if I’m wrong, but you were the one who came to me. You wandered into my room and climbed into my bed. I know for a fact you weren’t too damn drunk to forget about that part.”
As bad as I wanted to deny the asshole’s accusation, he was right. That night, he was the only thing on my intoxicated mind. “Whatever,” I grumbled. “And don’t worry, I’m not going to tell anyone in your precious little family. Therefore, I didn’t feel the need to answer your calls.” I knew the real reason he kept calling. He didn’t want them to know he’d hooked up with the daughter of the home-wrecking whore they hated. They’d already had one embarrassment to their family; they couldn’t have another.
He winced at my insult. “I was calling to check on you. I wanted to make sure you were okay after everything considering you left my bed in the middle of the fucking night and haven’t talked to me since.”
Yeah. right, buddy. Everyone knew the Douglas family didn’t care about anyone but themselves; they were born without souls.
I shook my head at his obvious lie. "It doesn't matter. It happened, now let's move on and forget about it. Okay?"


He nodded in agreement. "You're right, but shouldn't we-"

Charity Ferrell was born and raised in Indianapolis, Indiana and still resides there with her future hubby and furry, four legged children. When she’s not writing, you can find her reading, caving into her online shopping addiction or spending time with her family.