The Reaper and The Cop by Mina Carter with Excerpt & Review 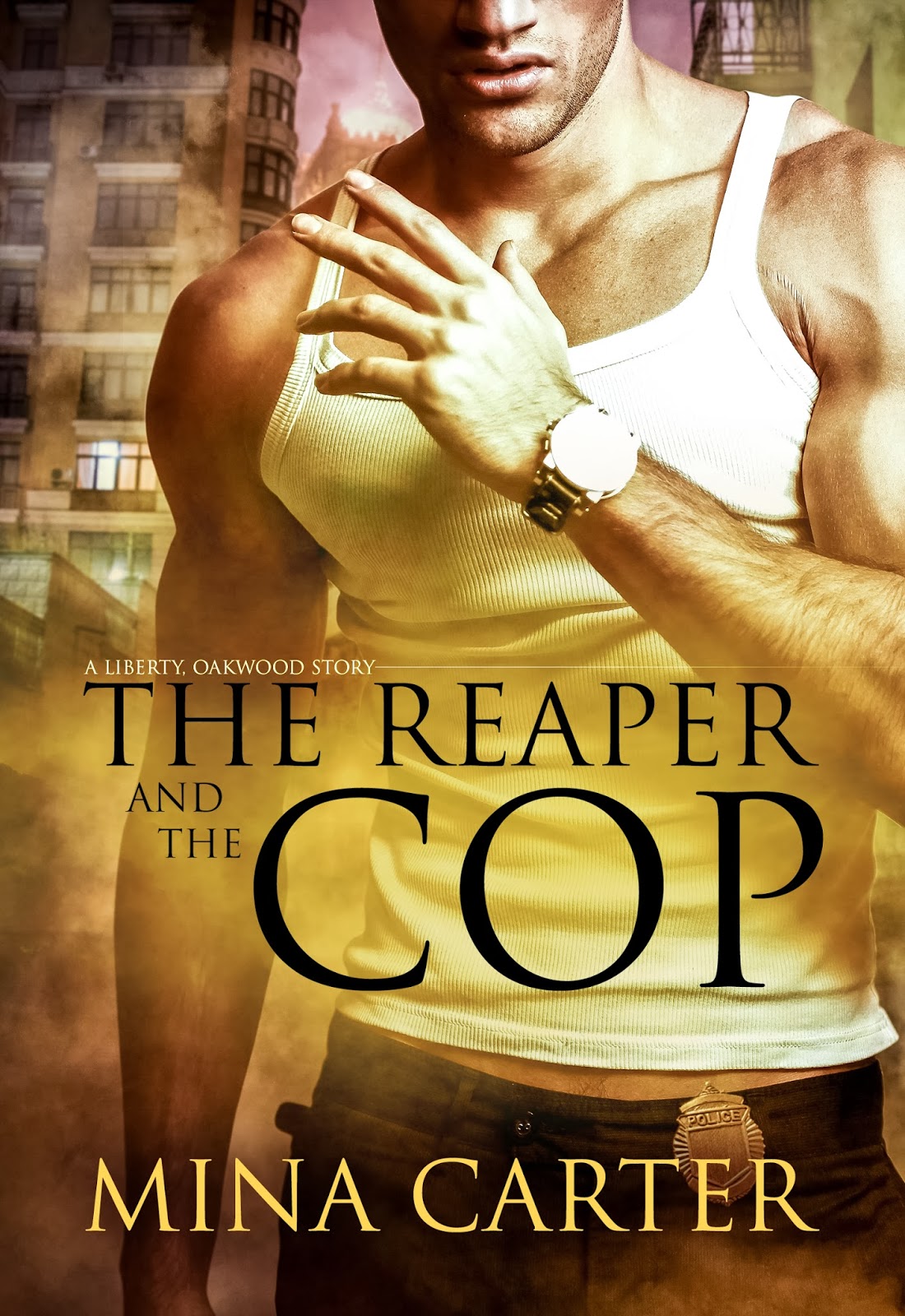 The latest in a long line of Reapers, Laney hits Liberty, Oakwood expecting the usual ‘reap and run’ type of job. However the small town holds far more secrets than she expects, including a sexy cop who blind-sides her reaper instincts big-time.

Liberty. It used to be a nice town until the things that go bump in the night moved in.

Detective Troy Regan moved to Liberty to claw back a little of his soul after working homicide in the big city. But the sleepy little down has problems of the paranormal kind and it’s police department have gone from calls about lost cats to Boggarts in the basement. Then the seriously nasty stuff moved in.

Sparks fly when a sexy Reaper meets a hot as hell Cop...

Troy’s not sure exactly what flavour of paranormal Laney is, but he doesn’t care. She’s tiny, delicate and gorgeous. When he finds a Lycan looming over her in an alley, all his protective instincts flare up. He needs to get her home, keep her safe…in his bed.

But is she the answer he’s been looking for to fill the empty spot in his heart, or the most dangerous creature he’s ever met?

Excerpt
I turned my attention back to the room, and the other new occupant. My mood picked up. Another cop, but not a Comfortable. Oh no, the owner of the nice shiny silver, almost-ready-to-reap lifeline, was a Young and Driven type. Booyah. Lucked out on the first night. I resisted the urge to fist pump, and took a closer look.

The typical, tall, dark, and handsome, he wasn’t as young as some—around mid-thirties—but boy was he driven. Energy surrounded him like a force-field, his movements animated as he slid into place opposite a Comfortable and started talking. God, I hoped the other guy wasn’t his partner. They’d drive each other nuts within a month.

He turned a little, still talking, and scanned the bar. It was automatic behavior, and with the seat he’d chosen, facing the rest of the bar with his back to a wall, told me that he had to have seen action somewhere with a higher crime-rate. The sort of place where you checked out the entrance and exits and kept a hand on your weapon just in case.

His gaze skittered over me as I expected, but allowed me to get a good look at his face.

Heeeelllo, handsome. Yeah, he was the type I went for. Clear blue eyes, dark hair, and a lean, hard-muscled body no amount of clothing disguised all the way. The shirt clung to a set of broad shoulders, hinted at a wide chest, and tapered into slim hips. Couldn’t see the legs from where I was, but if they matched the rest of the package, I was sold.

He looked at me, gaze direct and unconfused, and I tried to breathe whiskey—I don’t recommend that by the way. The bastard stuff burns the inside of your nose better than paint-stripper. Shit. I was half in the shade, so he shouldn’t be able to see me. Not see me and keep his gaze on me that long. Blue eyes swept me from head to toe, taking in the form fitting bike leathers and heavy boots.

Unlike my brother, I can ride, but I never bothered with the death’s head helmet. Or any. Not like I’m worried about getting knocked off and killed. Reapers are hard to kill, like really hard to kill. Until the big man decides your ticket is ready, you ain’t leaving this mortal coil.

There are legends of Reapers who had tried to kill themselves. They all failed. Even standing in front of a speeding train doesn’t do it, although the guy in question was out of action for a couple of months as all his limbs grew back. I shivered at the thought. I’m not into that level of pain
I managed to stop coughing and shot him another look. He winked at me. Honest to goodness winked.
Shit.

Throwing some bills onto the bar, I grabbed my pack and beat a hasty retreat out the door.

Following the cops to get to the bodies was one thing. Following cops who could see me, and the methods I used to strip the souls from their bodies, was different. The fact that I had zero makeup on and my hair was a mess was absolutely coincidental. 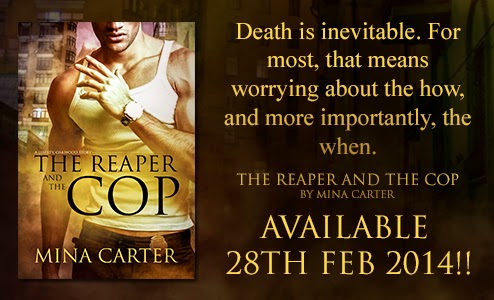 About the Author--Mina Carter
Mina was born and raised in the East Farthing of Middle Earth (otherwise known as the Midlands, England) and spend her childhood learning all the sorts of things generally required of a professional adventurer. Able to ride, box, shoot, make and read maps, make chainmail and use a broadsword (with varying degrees of efficiency) she was disgusted to find that adventuring is not considered a suitable occupation these days.

So, instead of slaying dragons and hunting vampires and the like, Mina spends her days writing about hot shifters, government conspiracies and vampire lords with more than their fair share of RAWR. Turns out wanna-be adventurers have quite the turn of imagination after all...

(But she keeps that sword sharp, just in case the writing career is just a dream and she really *is* an adventurer.)

The boring part: A full time author and cover artist, Mina can usually be found hunched over a keyboard or graphics tablet, frantically trying to get the images and words in her head out and onto the screen before they drive her mad. She's addicted to coffee and would like to be addicted to chocolate, but unfortunately chocolate dislikes her.