Unsettled Series by SC Ellington Spotlight with Review of Surrounded

Synopsis:
After a horrific breakup with her longtime boyfriend, Brooklyn Caldwell is completely disenchanted with the notion of mingling with the opposite sex. Damon Williams had been everything she thought she wanted…until he wasn’t.

Brooklyn is surprised to find that while she has been successful in keeping the opposite sex at bay, somehow she is defenseless against Logan’s confidence and charm—and it doesn’t hurt that he is absurdly beautiful.

As much as Logan didn’t plan on pursuing her, he is drawn to Brooklyn’s muted beauty and her witty persona. For all his success, Logan is ensnared in the coveted world of unequivocal wealth and power, but behind closed doors is taunted by his own demons and an undeniable need to atone for a monumental mistake. 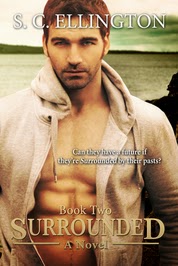 Synopsis:
Everything was falling into place. Even amongst all the chaos of Washington D.C., Brooklyn and Logan found each other.

Brooklyn never expected Logan...and as it always seems to happen with her...things fell apart. She has been through this before...was she strong enough to do it again?

On the outside, Logan was the epitome of wealth and confidence. Many knew his name but few knew his secrets. He never expected Brooklyn...but now she's walked away. He knew what they shared mattered to her...and she...she mattered to him more.


My Review: 4 stars
What a great addition to this series. I really can't wait to see what's next in store for Brooklyn and Logan. This second book was a continuation of the first, going back a bit, but then picking up where the misunderstanding occurred between them. Brooklyn and Logan have issues. They do. But they both realize that the other part of them is missing once they are apart. On her part, Brooklyn doesn't realize how far and just what Logan would do not to lose her in his life. Logan knows that Brooklyn is special. But realizes how special when she walks away without explaining anything to him, leaving him to figure out the puzzle. Then go get his woman. It takes time and a couple of people helping him out, but it's all worth it in the end. I am hoping there is more to this series, but am glad that there is some resolution to Brooklyn and Logan's relationship in this book. This was a pretty quick read for me, because I needed to find out what happened at the end of the last book to make Brooklyn to what she did. Ms. Ellington has done a fantastic job with this series and these characters. I can't wait for more.


About The Author
S.C. Ellington is an African American author who enjoys expressing her creativity through frequently writing adult, contemporary romance novels that readers can relate to, but more importantly, enjoy.

Aside from writing, Ellington enjoys curling up with her e-reader and absorbing herself in novels loaded with emotion, desire, and passion. She also likes to spend sunny, wistful afternoons, in her hammock thinking up new ideas for great stories. Her debut novel, Unsettled was generated while consuming her favorite snacks--hot chocolate and popcorn.

Ellington currently resides on the west coast with her beautiful Keurig, family and loving friends.