About Last Of The Red-Hot Cowboys (Hell’s Outlaws #1): 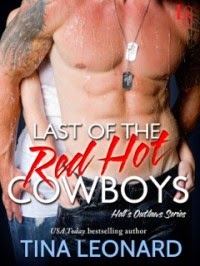 Mayor Judy pulled over, and Trace’s black truck pulled alongside.
“Judy,” Trace said when she’d rolled down her window, “send Ava to my truck. I want to talk to her.”
“No way.” Judy shook her head. “If you think I’m letting one of my chickens go off with a bona fide wolf, you’re not thinking straight, Trace Carter.”
“Send her over, Judy. Ava, time’s wasting and the sun’s going down. Move along.”
“Arrogant ass,” Ava said under her breath. “I’ll go see what he wants.”
“Are you sure?” Judy asked. “I don’t like the look in his eyes.”
They studied the cowboy glaring out his window at them. He wore a black hat and a dark scowl, and Ava favored him with a frown to match his.
“It’s okay,” Ava said. “I’m not worried about the look in his eye. Or anything else.”
She got out of Judy’s truck and jumped in the passenger side of Trace’s. “Do you always boss people around?”
He waved at Judy and headed down the road. “Pretty much. Will that be a problem for our partnership?”
“Partnership?” She wished he wasn’t the type of scoundrel who made her body take notice. Not just take notice, but admire and desire. “As I recall, we have nothing near a partnership.”
“Do you have one with the Horsemen?” he asked, his tone soft and somehow dangerous.
She looked at Trace with disgust. “Really? You couldn’t just ask Judy what you wanted to know? You had to use me as your pigeon?”
He laughed. “And a cute pigeon, too.”
“Why do you care, anyway? You turned us down.”
“That’s true. And I haven’t changed my mind. I just think you and I can come to a different set of terms.”
“I doubt it very seriously.” Something inside her hoped they could. “You’re just trying to thwart Judy.”
“Judy needs to be thwarted. At times Judy is Judy’s own worst enemy.” He turned down a lane shrouded by big, leafy pecan trees.
“Where are we going, anyway?” Wherever it was, it looked peaceful—and too secluded.
“We’re going to the pond. I do my best thinking at the pond,” Trace said cheerfully.
“I didn’t know you did any good thinking at all.”
Trace shook his head, his grin huge. “Can I give you a little advice?”
“None that I’ll welcome.”
“Don’t listen to everything our darling little mayor says. Judy is the most wonderful woman in the world, and she’s a master of a thousand faces. She has all kinds of tricks up her sleeves. Men lose their cool around Judy, and she darn well knows it.”
“But not you.”
“That’s right. Not me.” Trace grinned hugely and parked his truck near the lake. “Now, hop out and grab those two fishing rods. And if you’re in as good a shape as you claim, grab the bucket of worms, too.”
She didn’t get out of the truck. “I’m not going fishing.”
He opened her truck door, pulled her out of the truck. Appeared to give her weight consideration as he held her in his big, strong arms. Arms that felt amazingly and alarmingly wonderful.
“Put me down.”
“I like a woman with curves, just for the record.”
“Put me down.”
He set her gently on the ground. “Shall I get the worms, then?”
“I’ll walk back to town if you don’t get to the point immediately.”
“Sassy. I do love a lady with spice. Okay, no worms. We’ll use corn.” He grabbed the fishing poles and a plastic bucket and headed down a path to the blue-green pond she could see just at the edge of a few oversized willows.
Ava looked around, annoyed. She could follow him, find out what was on his mind. That would be what Judy would advise. Clearly he had something on his mind or he wouldn’t have gone to the trouble and ruse of dragging her out here to be his fishing buddy.
She doubted very seriously Trace had fishing on his mind.
She could hear him whistling at the water’s edge, setting up a couple of camping chairs he’d pulled from under a tree. “You ass,” she muttered. “You really think the world turns because you say it does.”
Her gaze fell on the shiny set of keys hanging from a Billy Bob’s key chain, dangling from the ignition. Where she came from, a man’s truck was his castle.
A castle with keys in it was just too hard to resist.
She got in the truck, turned the engine on, and drove away, Trace’s yells following her for a good hundred yards.
About Tina Leonard: