One, Wallace is her perfect idea of a partner, loving, loyal and handsome. The second, Bryn, is her true mate, the man chosen for her by nature and her family. Denial and naivety for nature’s choice, sends her into a rage of independence against the laws of her own destiny, family and her own father.

Wallace Kirk is assigned to protect the beautiful Lily since her birth...

His loyalties are tearing him apart. His own mate, dead, taken from him, fills his thoughts as Lily begs for his attention. She needs him, but not as much as the wolf that prowls in her flesh.

Yet his true mate, the woman chosen for him, denies her destiny. His battle for her and his own pride must overcome her feisty rebellious streak. Both men must fight for her in the throes of oncoming battle and she must make the right choice. A decision that will shape the war.

*Author note: this book was previously published under the title Blackwood: Lily by R.L. Kirk* EXCERPT
Lily nodded thanks at the woman who served her coffee. Turning too quickly, she collided with a very firm wall like being. She stumbled backwards and strong arms wrapped around her waist. Lily turned in time to see a quick, large hand catch the cup of coffee before it splattered all over the ground.

Inexplicably, she felt moisture pool between her legs. A whimper parted her lips. She turned breathlessly to look up at the most mesmerizing blue eyes she’d ever seen. Lily couldn’t breathe. Hell, she didn’t want to. She might vomit all over him in her embarrassment.

Her wolf exploded to the surface and she leaned up, tipped over by her rescuer and took in a deep whiff of his scent. It was so right. God, he smelled like the moist woods at night, soap, and salted masculine sweat. The tip of her nose rubbed against the curve of his neck and she opened her mouth. She realized in an instant what she was about to do to the handsome, gorgeous stranger—mark him as hers.

Her wolf snarled and tried to become the dominant player in this new unexpected game. She felt something bay back at her. Startled, she realized that the man holding her was wolf. Her fingers gripped his biceps tighter and she opened her mouth to speak.

Slowly, and as if she would break from too rough a movement, the man set her to rights.
“Sorry, I thought you wanted to dance there, this is Starbucks right? Not a dance studio?”

Lily found that her lips were flapping like a fish out of water. She sealed her lips shut and swallowed past the lump in her throat. Her heart thumped wildly against her rib cage and she could only stare up at this beautiful man—wolf. “Um, sorry. You must think I’m just—?” Reluctantly, she moved away from him.

His smile was warm and it reached his eyes. His dark hair was trimmed, but the ends at the back of his neck touched the collar of his shirt—rugged and wild.

She watched him reach out and brush a strand of hair from her face. It was so tender her heart suddenly started to ache.

He is wolf, run for fucks sakes! Wallace is the only safe wolf.

But she couldn’t. She was rooted to the spot. Super glued to the floor. She wanted to know this man so bad.“Yeah, um, sorry again. I mean, I was thinking about things. Stuff—my friends.”

“Well, maybe you could help me; I’m actually supposed to meet someone, a young woman.”

She swallowed and tilted back a bit. For some reason the thought of him looking for another woman made her jealous—nope it downright pissed her and her wolf off. The barely restrained snarl pressed at her lips that were now tightly pressed together. Once she’d regained some form of humanity, she cleared her throat. “What makes you think I can find her? London is a huge place, and I only deal with a certain type of client in my line of work.”

“I was told to meet her here, her name's Lily Blackwood.” 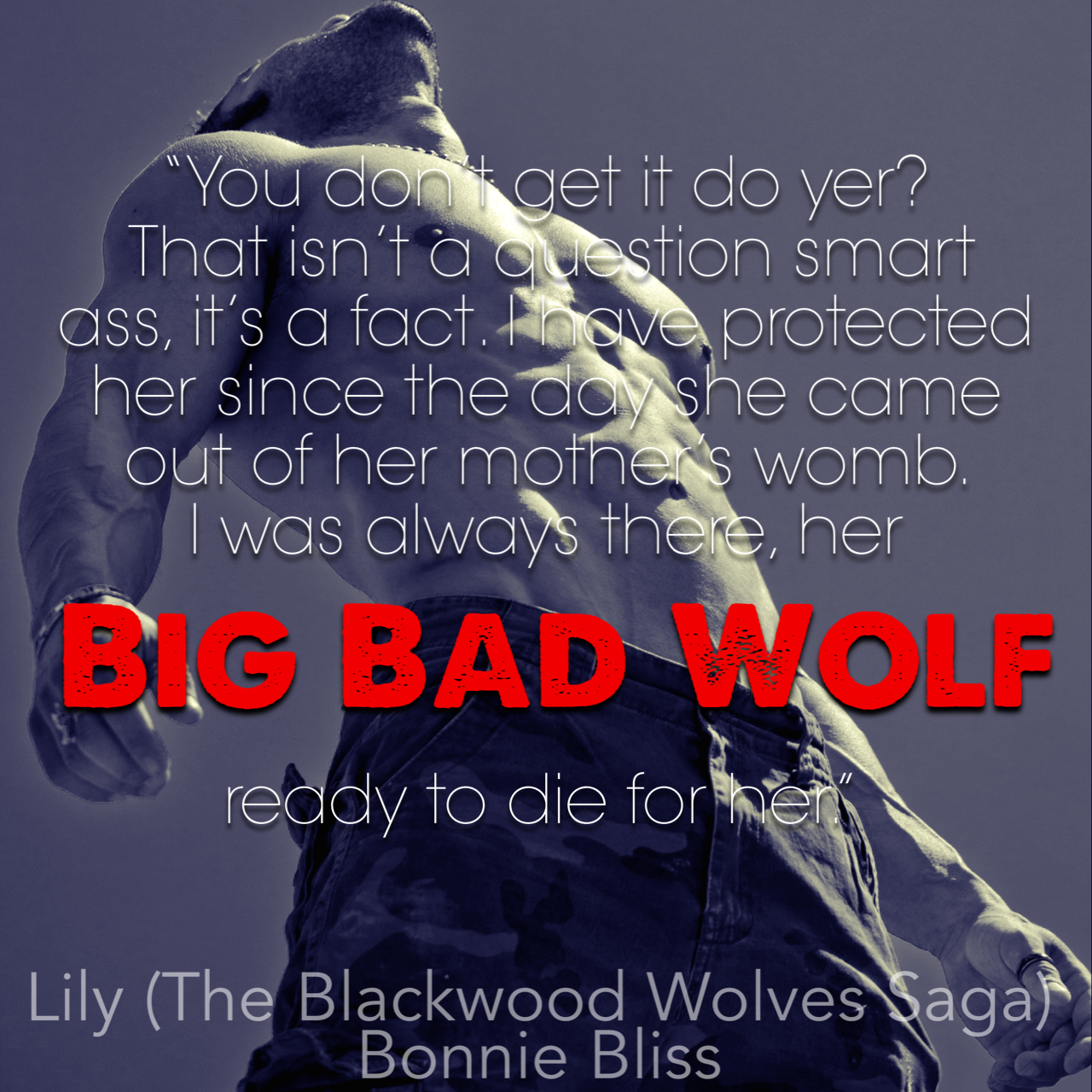 My Review: 4 1/2 stars
This one kind of crept up on me. At first, when I started reading, I was a bit confused. Then when it finally got down to it, I got it.  This was definitely an interesting read. I liked the combination of shifters and vampires and then at the end we get to find out what exactly the Murphys are. I really enjoyed that. This was a really great beginning to this series. It introduces us to a great deal of characters and give us an insight to all of them. This one was great. I didn't like that they kept so much from Lily, and then expected her to man up. She got that all right. If no one ever tells you, how are you supposed to know. I loved Wallace, that man was an Alpha, if there ever was one. Killian, I'd love to get to know more about that's for certain. I loved how Lily responded to Bryn, and vice versa. There was a lot going on in this book and it certainly laid the foundation for what's to come. I can't wait for more.

Bonnie Bliss is the brain child of two authors. Bonnie is a husband and wife duo who have come together to weave stories of passion, action, betrayal, and ultimate surrender. They have discovered that mixing genres is their thing. Their tastes go dark, and they love to twist up sweet stories and make them a bit more tense and sexy. Bonnie writes in multiple genres with plans to dabble into more areas of fiction.

One is a Southern California native, the other was born and raised in Yorkshire, England. The husband spends his time giving the wife alpha males with bite. He is a man that needs to see his world in print. He has a panty melting accent, loves listening to music, watching Game of Thrones, and obsessing over Heisenberg. The wife spends her time writing strong women that evolve into their power, they don’t just come out guns blazing. She claims the song California Girls, by Katy Perry is totally accurate. She’s done everything from waitressing, customer service phone rep., Corporate Real Estate, and spent a pretty impressive part of her life working for the Disney Corporation—before finding her way into the publishing world with her husband.
Facebook | Goodreads | Website | Twitter 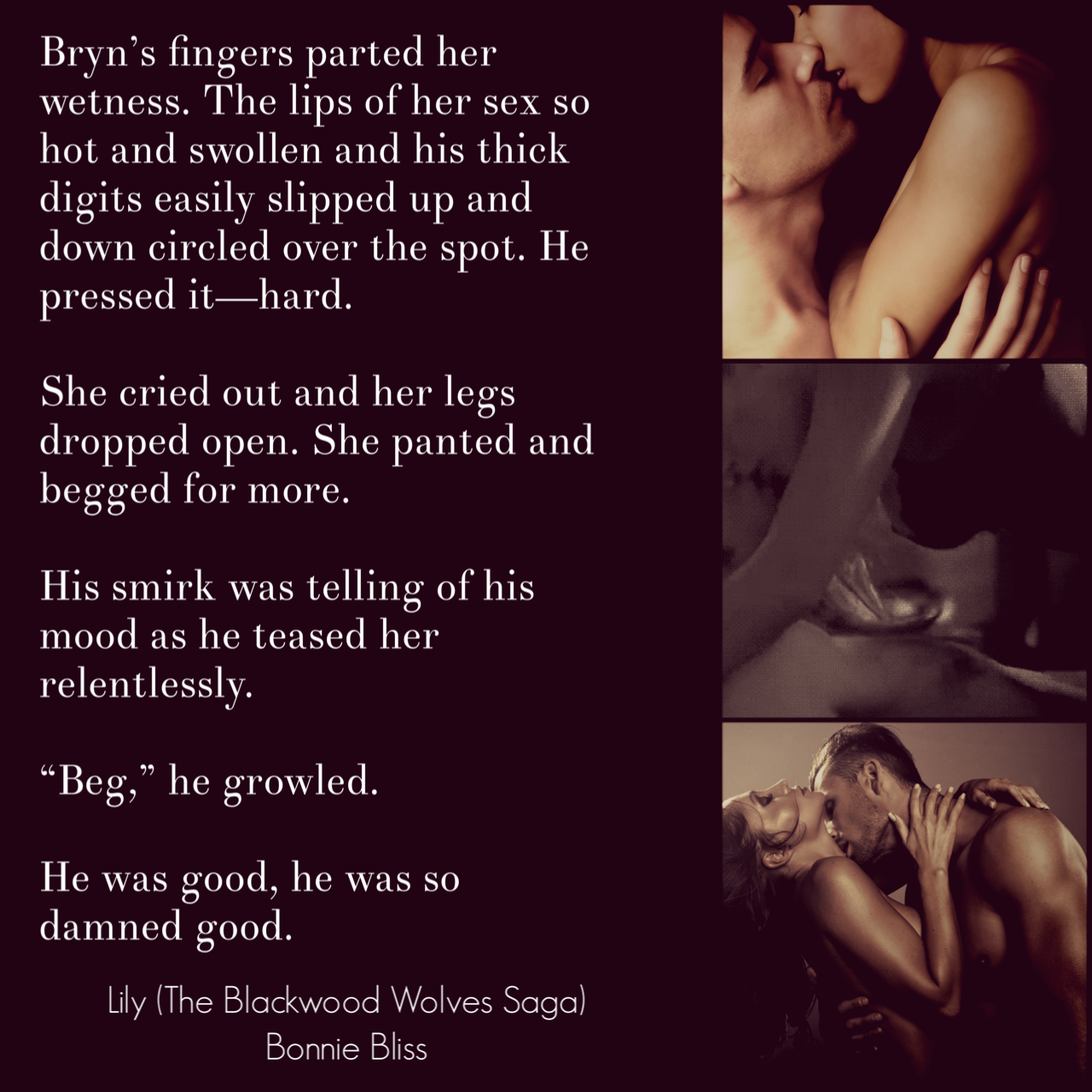