Set fire to your passions with heart stopping suspense, adventure, and intrigue from Ignite. Each Ignite title features to-die-for heroes and kick-butt heroines on an emotional roller coaster ride toward love. With new books and new passions exploding every month, every Ignite novel is one you can’t put down until the last page is turned. To find out more about their titles, chat with authors, participate in special events, and to find out what books are coming next, visit the Entangled website, follow them on Twitter, and like their Facebook page. 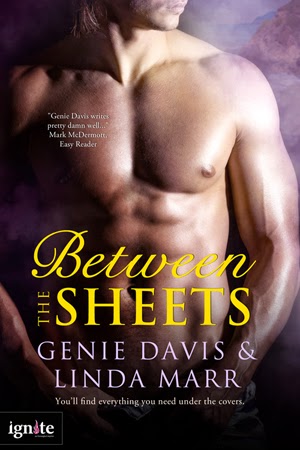 Between the Sheets by Genie Davis & Linda Marr

Meanwhile, Riley is feeling pretty upended himself. A specialist consultant with the FBI, he’s on a mission to derail a drug king-pin whose wealth and extensive real estate is managed by Jenna’s neighbor, he’d planned to ingratiate himself with Jenna just enough to gain access to her neighbor’s apartment so he can keep a close eye on his comings and goings. Instead, he finds himself not only drawn to Jenna, but falling for her, hard. On the heels of this realization comes the discovery that her new neighbor didn’t move in next door by chance: her father is the last hold-out against a drug-money fueled billion dollar development scheme and her neighbor plans to take and hold Jenna hostage until the necessary papers are signed.

As Riley struggles to keep Jenna safe, the romance they’ve woven could force them to pay the ultimate price: admitting they’ve fallen in love—for real. 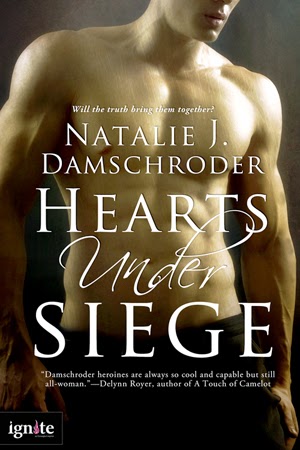 
Brady Fitzpatrick has spent a decade burying the pain of a broken heart while working for SIEGE, an information-gathering spy agency. That it kept him away from his family as well as his best friend Molly has been an unfortunate side effect. But when his brother, also an agent, is killed during a foreign op, Brady is drawn into a web of intrigue that threatens the lives of everyone he loves…

Molly Byrnes has loved Brady forever. As his best friend and a de facto member of the Fitzpatrick family, she holds them together in their crushing grief. But as a member SIEGE’s ground team, she doesn't buy the official line about Brady’s brother’s “accidental” death and launches her own investigation—only to uncover a shocking secret that she and Brady must get to the bottom of before their target finds them.

Tangled emotions land them in bed together, opening Brady’s eyes to the incredible, fearless woman who’s been there for him all his life. But after a lifetime of disappointment, how can Molly trust the possibility of a future with him…or if they can count on any future at all? 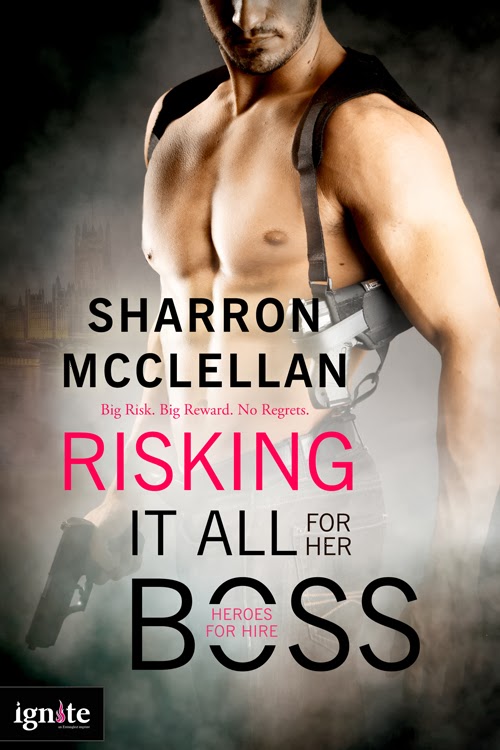 Risking it All for Her Boss by Sharron McClellan


When High Risk Securities (HRS) agent, Eva Torres, botches an undercover job by failing to rescue both of the kidnap victims she was sent to retrieve, Quinn Blackwood—her former lover and the man who broke her heart—pulls her and one of the victims out of harm’s way. As a penalty for her sins, she’s offered the dull job of escorting a former bio-chemical warfare scientist to Washington D.C. to reunite with his daughter. Much to her displeasure, the job of monitoring her assignment is given to Quinn.

Quinn isn’t thrilled with the situation either. He taught Eva everything he knew about secrets, sex, and lies—but the biggest lie of all was the one he’d told himself: that his missions for HRS were more important than anything, including his relationship with Eva. Because now that they’re working together again, the urge to put his hands on her, to feel her beneath him, is killing him.


Things only get worse when their current operation goes wrong, and the scientist they’re guarding is kidnapped mid-air. Now, Eva and Quinn have to work together to find him before he is forced to create a monstrous weapon that could destroy entire cities. A hard task made more difficult when they find themselves fighting both the enemy and their building desire for each other. Can they work together for the sake of the mission without reigniting the passion between them—or will passion be the salvation of them all?