Under My Skin (Skin Deep #2) by J.M. Stone with Giveaway, Excerpt & Review 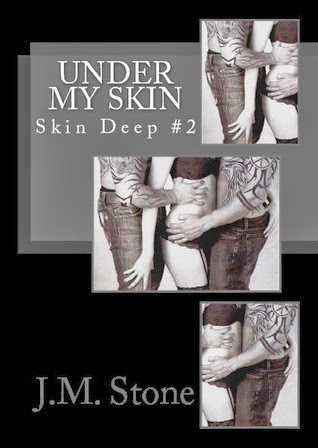 Synopsis:
One little piercing. That’s all Allie wanted when she dragged her best friend into Skin Deep. She never imagined that it would result in a busted lip and an engagement ring for Emma, or that it would come with a double side of six-foot plus, tattooed, sexy-as-sin, H.O.T. maleness for her! Now she’s torn because Brandon and Jackson have both let it be known that they want her. And both are used to getting what they want. But what about what Allie wants?

Brandon is hot for Allie. So is Jackson. Neither of them are willing to step aside for the other and they’re tired of Allie running. So they hatch a plan…

Add in wedding bells, a dog named Doug, and you’ve got a recipe for a good time. Or a disaster.

*Recommended for readers 18+ due to HOT sexual encounters, adult situations, and language.

Excerpt:
Which is why, an hour and countless dances with my guys later, I was now kneeling on the bar, leaned backwards as the bartender poured a shot of tequila straight into my mouth.
I got to my feet, still surprisingly steady, and started busting a move as Prince’s Pussy Control started playing. I heard Emma hoot and then she hopped up beside me, both of us dancing our asses off.
She was laughing at me like crazy because I couldn’t help but belt out every single word as I dipped and rolled and basically humped the air.
Aaaand cue the big gulp and wide-eyed look from both me and Emma as we noticed halfway through the song that we’d gathered an audience.
And fuck me running…front and center of that group were three drop-dead gorgeous males who did NOT look happy.  At all.

My Review: 4 1/2 stars
I was hopeful that Allie, Brandon and Jackson would all be together like they had planned. Unconventional, yes, but it worked for them. Everything seemed to be going along smoothly, but then again, maybe Allie was on to something in the first place when that little green eyed monster came into being. I'm going to be real honest here and say I did not like the way this ended at all. Brandon was not supposed to do what he did, and I was shocked that he did. I also think that things are not as cut and dried as they appear to be. I think in the next book there will be a surprise or two, especially for Allie and Brandon. I could be wrong, but that's what I'm thinking right now. I really can't say too much about what I'm thinking because you just have to read it to understand why I'm all over the place with this. Over all it was a great book, which is why then ending crushed me. I loved the characters, they were all fantastic. They all were one huge happy family. I can't wait to see what happens next, that's for certain. Even though Allie and Brandon seem to have worked things out, I still want to see if I'm right or wrong, and what comes next. I know it'll be a great story regardless, just as this one was. J.M. Stone knows how to keep me interested and turning the pages.

Author Bio:
J.M. Stone is a legal assistant by day, and a writer by night. She started writing at a young age, mostly poetry and song lyrics, some of which were published. She currently lives in Ohio where she's lived for most of her life, and enjoys spending time with her other-half, their mouthy daughter, two spoiled and crazy dogs, and the rest of her abnormal family. (Don't worry, abnormal is good!) In her spare time, she loves to read, write, sing, and make people laugh, which usually happens at her own expense! 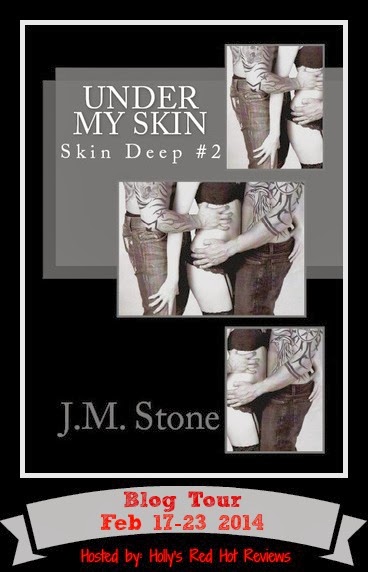