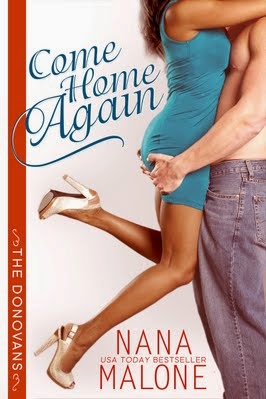 Come Home Again
Nana Malone
Contemporary Romance
Date Published: May 6, 2014
Anything can be fixed with a little Duct Tape and sass…

At least that’s what celebrity fixer, Delilah Donovan, used to think. She prides herself on being able to handle anything. But when she’s asked to fix the new CEO of Synth Games, she never dreams she’ll come face to face with the only man to ever break her heart.
The past can't always be fixed...

When a friend calls in a long ago favor, reformed hacker, Nate Williams, worries that his shady past will come back to haunt him. As acting CEO of Synth Games, he needs to make the world believe he’s CEO material.  Too bad the one person who can help him is the one woman he had to leave behind.

Will Nate bury his demons for good or will his past dictate his future? Can Delilah rise to this challenge or will Nate shatter her heart…again.

Excerpt
“I’d have to trust you to help, and I don’t.”
He stalked over to her, crowding her personal space. “You think I don’t remember that last night I saw you? You think my decision to leave doesn’t haunt me most nights? I had to leave. You, and your folks—the last thing I wanted to do was hurt you. I shut the door on that part of my life when I left. Trust me when I say I never thought I’d be seeing any of you again. But here we are. And it doesn’t change the fact that I need your help.” He backed off again and leaned back against the wall.
Blood simmered under her skin, scorching her flesh from the inside. “And what happens after I help you? You vanish without a trace again? And you know what? Stop calling me Lila. You lost the right to call me that when you left.”
“I’m sorry, I can’t do that.” Softly he added, “I remember everything about you.”
His voice, low and husky, had heat pooling in her center and her body vibrating with longing. She hated that he could do that to her with simple words. “God, you know, you are such a bullshit artist.”
The air changed around them, and Delilah shivered. She knew what was coming before he even moved, but there was no bracing for it. He gently tugged her against him, giving her every chance to pull back, but no matter the commands her brain gave, her body refused to comply.
Nate slid his arms around her. His lips were gentle, but demanding. A spike of the electricity flared between them, scorching her lips when his tongue dipped in. With a low groan, he shifted their angle, kissing her deeper and ripping a moan from her as her whole body started to melt.
She didn’t have the defenses to fight off those long dormant feelings. Somewhere in the far recesses of her mind, alarm bells rang, starting as a low buzz, but quickly intensifying to a sharp clang.
He dragged his lips from hers and stared at her. His muttered curse echoed her own feelings.
The elevator dinged at the ground floor, and the doors slid open. She shook her head in an effort to kick-start her brain. “What the hell was that?”
Nate’s heated gaze met hers. “That was something I’ve been thinking of doing for seven years.”
Immobilized, she watched him walk out. Her lips tingled, and her body was too limp to move. After all this time, he still had the power to stun her.

My Review: 4 1/2 stars
This was sooo good. I really enjoyed Nate and Delilah getting to know each other again. I liked that Nate was able to really knock Delilah off her feet, and made her forget about everything except him - even if it was in small doses. She really needed to do that. I loved getting to know their back story, which was fabulously complicated. Even more, because Delilah didn't know about some of Nate's past. But that's actually what caused the problems between them in the end. I loved the way that Nate finally did what he needed to do to put the past where it belonged - behind him so that he could look to a future. I was proud of Delilah for standing up for herself when her slimy boss wouldn't do it. Both of those guys were serious creeps. I loved that Nate came to Delilah and made her see exactly what she meant to him and always had. There was a lot of other stuff that went on in the book, corporate intrigue, slimy D-list movie stars, power struggles, corruption and so on. This was a well written book and I loved reading it. Nana did a great job with all of the characters, slimy or not, and the story line was fantastic as well. Sometimes you can go home again, and everything you do to get there makes it so worth it.

It was a sultry summer afternoon in Ghana, and Nana was a precocious thirteen. She's been in love with kick butt heroines ever since. With her overactive imagination, and channeling her inner Buffy, it was only a matter a time before she started creating her own characters.

While she waits for her chance at a job as a ninja assassin, in the meantime Nana works out her drama, passion and sass with fictional characters every bit as sassy and kick butt as she thinks she is.


Blog: www.nanamalone.com/blog-musings
Posted by Unknown at 1:00 AM