How To Save A Life (A Brown County Novel, Book #3) by Amber Nation with Giveaway, Excerpt & Review

Mike Jameson’s world came crashing down around him and he has refused to let anyone else in since. Running through the daily motions of life he keeps himself busy, whether it was being the drummer for The Nation’s Capital, working on vehicles, or being a paramedic. His one goal in life has been to save lives, but he has no idea that it's his life that needs saving.

Sheridan Nichols makes an unexpected appearance in Brown County on her way out of the nightmare she was living. One fateful night, she is hit by a drunk driver and left injured and stuck in a strange town now without a car. Mike steps up to the plate and volunteers to let her stay at his house, and in the process, volunteers his heart as well.

Friendships form and chemistry ignites and after one passionate night Mike thought things between the two of them were about to change. But Sheridan hides a secret, one which is ultimately a game-changer. When her past catches up with her, will she have to rely on herself or will explanations and apologies be enough to salvage things? In the end, will they discover that by being together they save each other's life?

“Oh my God!” talk about a delayed reaction, you would think my spidey senses would be on hyper alert after my past situations, but I felt so safe with Mike. How could I be so stupid?

I’m sure I had a horrified expression on my face, because Mike pushed himself off the counter and began advancing on me.

“What’s wrong, Sheridan? Is it your foot?” He genuinely sounded concerned, which was a pleasant change from him being a pompous asshole.

“Well, my foot is aching, but I’ve dealt with much worse. I just realized why you are being such a fucking douche to me!”

His brows pierced together as if he were challenging me to confront him.

“You are going to murder me in my sleep!” His jaw dropped open and he looked like he had a million and one things to say, but it seemed as if I had stunned him speechless. I continued on, placing a hand on my hip. “No, seriously, that’s why you were so adamant about me coming with you.”

Finally, he seemed to come unglued as he threw his head back and let out a barreling laugh that came from deep within his gut.

Seeing him release such a hearty belly laugh at my concern should have royally pissed me off, but instead it did the complete opposite, it turned me on. A rush of wetness flooded from my core, instantly soaking my panties.

It had been so long since a man had invoked such a positive and sexual reaction from me.

I had to tamp down my lust and remember that he was a cocky jerk and things would be just dandy.

“You actually think that I brought you here to kill you in your sleep? Chop you up into tiny little pieces and shove you down my garbage disposal? You are delusional, maybe your concussion is affecting you more than you initially thought.”

My hand was still placed on my hip while my other was balled tightly into a fist and I tapped my good foot mercilessly on the floor. He technically hadn’t answered me and I wasn’t going to stand down until I was thoroughly convinced. His explanation seemed a little too well thought out if it was just a spur of the moment.

“That’s not the reason I brought you here, Sheridan. And besides, my house doesn’t even have a garbage disposal, which, therefore, makes my plan void.” He shrugged as if I was the absurd one.

I relaxed just a fraction, but that didn’t answer my question of why. “Then why did you volunteer to bring me here?” I crossed my arms in front of my chest, which showcased a white bandage taped on my forearm, covering the biggest abrasion from the flying shards of glass.

He came a beat closer, quickly closing in the bit of distance between us. I instinctively took a step back, trying to widen that gap. I couldn’t risk him getting closer to me, if I were to get a better whiff of his spicy scent, I would sure be a goner, and I needed to stand my ground.

“Sweetheart, I haven’t a clue, but when you’ve hatched another ridiculous theory, be sure to fill me in.” He said in a low, cocky and condescending tone.

I really thought he liked provoking me. He wanted to see fire, well he was about to get a taste of his own rudeness and go up in flames.

“The name is Sheridan, not sweetheart. I’m not now, nor will I ever be your sweetheart. Now, please do me a solid and point me in the direction of my room for the night. I’ll be out of your way first thing in the morning.” I may have looked strong on the outside, but on the inside I was shaking like a flimsy leaf getting ready to be blown into the wind. I would never be able to hold my own in a fight, it was too scary and intimidating. No wonder why I always submitted to Pate... Stop thinking about him.

5 stars
This was such a great story. I loved how Mike and Sheridan saved each other. Technically, Mike saved Sheridan, physically first. Then they each saved the other mentally. At first, I was so broken hearted for Mike after what he had gone through. I can't even imagine the pain and grief that would overcome you. I was glad that he opened up to Brock about it, so that at least one of his friends knew what was going on with him. I was really happy that Mike opened up to Sheridan about his past and that she did the same. I really don't blame Mike for being angry with her, however, for holding back a critical fact. That was something that was only fair for her to let him know when they were opening up to each other. She really shouldn't have kept that bit of information from him. I would have to say that he did over react, but then when he got home, really what was he supposed to think? He did jump to conclusions, but Sheridan didn't try to clarify anything either, and she really should have because she knew how Mike felt about her. Amber has made this a great book by making it so life-like. I have to admit, I was pretty scared at the end when Pate showed up. I wasn't quite sure how that was going to work out. I was glad that Mike didn't care about anything except getting to Sheridan. I really loved how this ended with them both really saving each other and starting new. I hope this series will continue because I love getting to know these awesome people from Brown County. 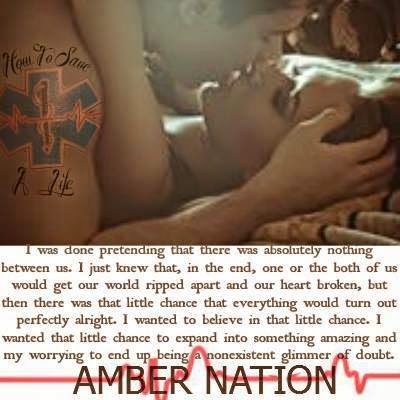 I am a wife, mother of two beautiful girlies, an avid reader, and a new Romance and New Adult author.

I was born and raised in Southern Indiana, but resided in Texas for five years while my husband was in the US Army. It was definitely a journey, but I am so glad to be back in my home state.

Whenever I'm not doing my motherly duties or at the soccer field I absolutely love to read whenever I have a moment to spare. My kindle is never far from my side.

My love of reading increased about a year ago and due to my love of books I decided to try my hand at writing. Already having a set of characters screaming to get out, my story took over and came to life.