Sexual dysfunction. The words make Sibyll cringe, but after one too many failed relationships, she has to face reality. Her O-button is broken, big time. Sick of sitting on the sexual sidelines, she books a week at Boot Knockers Ranch. If a passel of rugged cowboys vying to bring her bliss can’t get her off, nothing will.

Hugh had planned to sit out this week’s rotation of sexual therapy, but when he spots sultry Sibyll, he pulls rank. His bone-deep urge to possess her isn’t enough to coax elusive orgasms out of her body, though. And his resolve to give the lady whatever she needs wavers when she shyly makes a mind-blowing request.

Character Bios:
Meet Sybill. This petite, curvy blonde has a small trouble that is affecting her life in a big way—she can’t achieve release. Desperate to reach the level of intimacy she craves, she books a spot on The Boot Knockers Ranch, a Texas ranch specializing in helping women like her.

She’s ready for action, but that doesn’t mean she knows what to do. So she leaves it to the very capable hands of the tall, toe-curlingly dangerous-looking cowboy Hugh.

Hugh is one of the founders of The Boot Knockers Ranch. He’s also “master of games” and sometimes a player. He’s had a past heartache and struggles with emotional intimacy, which makes it difficult when he starts falling for Sybill. And his fellow Boot Knocker, Riggs, is another story…

Riggs wants Hugh—plain and simple. When he isn’t with women, he’s sharing them with Hugh. He loves to escape with hard work on the ranch, and he and Hugh dream of building a horse herd that will put more dollars in the pockets of the Boot Knockers. He’s in touch with his tender side, but he knows how to throw a punch.

The three of them create a dynamic that will shake the foundation of the entire ranch.

Sibyll followed her gaze to the door between stage entrance and hallway several feet away. His back was to her and the other dozen women, his shoulders taking up most of the door frame and his white T-shirt molded to a chiseled back. Sibyll outlined his back muscles with her gaze, cutting a path down to a backside hugged by worn denim.
The cowboy pivoted. His face was illuminated by the overhead lights as he talked to the perky Isabel, the ringleader of this insane audition process.
“He has a black eye!” someone whispered.
“From a bar fight? Please let it be from a bar fight!” a woman with a gorgeous head of red hair and thick glasses added.
The cowboy raised his head and stared at the women. Suddenly Sibyll’s muscles tensed to run. She didn’t want to be here, had made the wrong decision. So what if I can’t experience “physical and emotional sensation at the peak of sexual excitation” according to Dictionary.com?
Isabel swooped through the door and pointed at the curvaceous brunette to Sibyll’s right. “You’re next.” Then she returned to the doorway, where she leaned and talked to the cowboy with the black eye.
Dust motes swirled hectically in the lights streaming from the stage. Sibyll tried to follow one with her eyes. Anything to keep from looking directly at that cowboy’s handsome, rugged face.
He was huge—tall and broad and muscled in all the ways that made the knot in Sibyll’s core want to unravel. But it never did.
Maybe if he fights to win me, I could.
He glanced up again, and the group of women tittered. The leggy blonde was led offstage on the arm of a cowboy wearing all black except his shiny silver and turquoise belt buckle.
“Wow, he’s fine. Jenny’s lucky to get him,” the virgin whispered after they passed. They stopped at the door, and the production manager moved to the side so they could pass.
The black-eyed cowboy with the two-day-old dark stubble on his jaw shook hands with both cowboy and contestant.
“You—sexy secretary—you’re next.” The production manager jabbed a finger in Sibyll’s direction.
She looked around herself. A slight girl to her right wore a peasant dress and thong sandals, and the tall, toned girl to her left wore sporty shorts and a T-shirt with an energy drink logo.
“Wh—? Me?” Sibyll pointed to her chest.
“Yep, you.” The production manager whirled back to speak with the cowboy, but he’d strolled through the door and was making his molasses-sweet way across the stage.
He passed the first group of contestants, who froze like a herd of deer in the middle of Highway 495. He dipped his head and positioned a battered brown cowboy hat on it. “Howdy,” he drawled, lips curled in the perfect dose of Southern gentleman and cocky bad-boy.
Feminine sighs sounded in response. Sibyll’s heart thumped as he neared her small group standing nearest to the stage. The closer he got, the more his bulk seemed to take up all the space in the room. Or maybe that was testosterone.
He dropped a wink at the virgin and leaned in to speak to her. “The black eye was nothin’ as glamorous as a kick-ass bar fight. Took a hoof yesterday working with the horses.” He straightened and settled his gaze right on Sibyll.
She stopped breathing as electricity passed between them.
That’s my imagination. I’m so keyed up.
The cowboy cleared his throat but didn’t say anything. Around them, women gawked. Hell, even Isabel the production manager stood with her mouth open, glancing between the huge cowboy and her clipboard.
“Hugh, you’re not filling in today, are you?” Isabel asked.
The man blinked, severing his hold on Sibyll. He shook his head. “Nah, I’m not competin’ today. I’m Master of Games as usual.” He pinned Sibyll again with his gaze. Something dark and exciting coiled low in her belly. What if this man did stand up for her?
I’d choose him in a heartbeat. 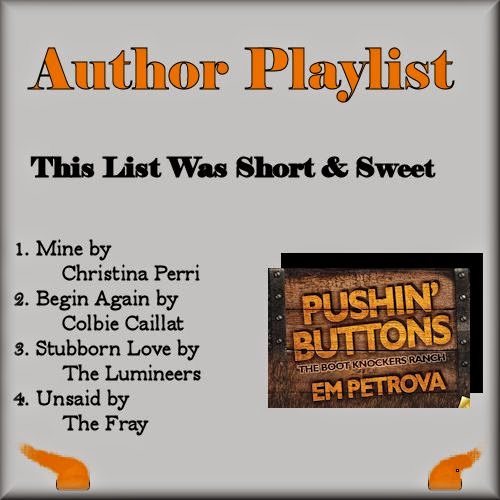 My Review: 4 1/2 stars
This is the second of Em’s books that I’ve had the pleasure of reading. I would have to say that she doesn’t write conventional romance, but the romance that she does write is knock your socks off steamy and erotic as hell. I liked that this wasn’t about two people, but three. Hugh and Riggs both work at Boot Knockers, when Sibyll enters the picture and they “fight” over her to win her companionship for the week that she’s at their ranch things get even more complicated. Hugh ultimately wins that competition at Sibyll’s choice. He doesn’t have a breakthrough however, until Sibyll asks Riggs while tipsy to join them. That sets off Hugh, because of all these things that he feels for Sibyll, but doesn’t want to say so. There are definite sparks between the three of them, and it’s a roller coaster of emotions for all of them. Hugh doesn’t want to share Sibyll initially, and when she does what she does, it only confuses him more. Hugh is trying to fight what he feels for Riggs, while at the same time trying to convince himself that embracing what he feels for Sibyll is alright to do so. Riggs is and has been in love with Hugh for a while, when he joins Hugh and Sibyll, he feels a spark for Sibyll as well and wants to explore that. That’s when things kind of get out of control and things are said and done that leave everyone hurting and feeling less than they should. Ultimately, the right thing for the three of them is done when they realize they don’t want to live without the others. The end of the book was fantastic and I’m looking forward to more in this series!  Well done Em, great story line, completely unique and great characters as well.