Beers, Hens and Irishmen (Book One in the Warblers Point Series) by Meghan Quinn with Giveaway & Review

Fiona O’Leary wants nothing more than to flee away from the small town she grew up in, her three extremely over protective brothers, and her Irish parents. But leaving Warblers Point is not that simple, especially when she is the bar maid at the local pub she owns with her three brothers. After a two year relationship with local Irishman, Murphy Ryan, sharing nothing but each other’s beds, she realizes she wants more out of a relationship besides sex. But somehow she keeps winding up in his arms wishing she could break away but finds the task impossible when her family is head over heels in love of the idea of Murphy and Fiona together.

Booker Hall, world re-known director, finds himself living an empty and unfulfilled life. The people around him are fake, narcissistic and only care about his money. In an act of desperation he decides to enlist his sister for some help, give himself a makeover and go to a place where no one would recognize him. Never did he think he was going to fall in love with an unsuspecting bar maid with whiskey colored eyes and an over-bearing family.

The minute Fiona lays eyes on Booker, she knows she is sunk. His devilish grin, movie star looks and charming heart are hard to avoid and she constantly finds herself gravitating toward him. The only bad thing about Booker is that he is a tourist and living in a touristy town she has learned that getting involved with a non-local only brings heartache. Instead of giving into Booker, she finds herself debating which relationship is safer; an empty relationship but fulfilling sex life with Murphy or a deep and meaningful relationship with Booker that could only bring heartache.

Beers, Hens and Irishmen dives into the complexity of Fiona’s love life, the crazy antics of her three brothers, as well as her two overbearing and heavily Irish speaking parents. Fists fly, hearts are broken, beer is guzzled and deceit is formed amongst comrades while the O’Leary’s take over Warblers Point in the search for love and what makes them happy.

I grew up in Southern California where I was involved in sports my whole life. I was lucky to go to college in New York where I met the love of my life and got married. We currently have five, four-legged children and live in beautiful Colorado Springs, CO.

You can either find my head buried in my Kindle, listening to inspiring heart ripping music or typing away on the computer twisting and turning the lives of my characters while driving my readers crazy with anticipation. My Website: http://authormeghanquinn.com/ 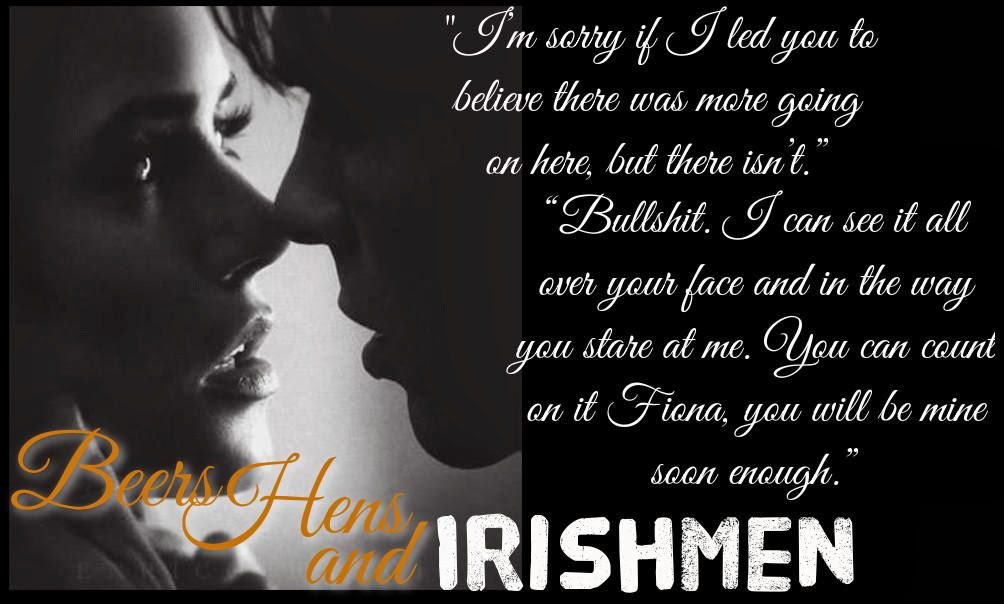 5 stars
Meghan seems to have the ability to draw me into any of her books that I've had the pleasure of reading. This one is no exception. Although I would have to say I did laugh a lot while reading this book, and I found most of the characters quite easy to care for. The O'Leary family is like none I've ever seen with my own eyes, bu have always heard of. Fiona being the only girl would make her upbringing a bit difficult on her. That shines through abundantly clear in this book. Difficult as it may be, she knows without a doubt that she is loved well and truly by her family. Murphy at first seems like a nice enough guy, but the longer the book goes on, the more he creeps me out. I loved Finn, Liam and Bradon they were all quite entertaining. While this book centered mainly on Fiona and Booker, there was also Finn and Blair, and Liam and Neala that need to be figured out. Not to mention Bradon and his womanizing ways. Honestly, I think he belongs with Tipper, it is spectacular to see them fighting. I really loved Booker from the beginning. He wanted different and he sure got it. He also wanted quiet and secluded, he got that too. What he didn't count on was Fiona. She sure as hell didn't plan on him. They both fought their attraction for a while, and they were both miserable. Once they stopped fighting, they went forward slowly. There were quite a few twists and turns that brought either great joy or unmitigated heartbreak. Sometimes both at once, no easy task. There were also times that fists would be flying, and blood would spill, you never knew who was going to be doing what to whom. Tempers flare and cool, revenge is plotted and people forgive. Not necessarily in that order, but there's a lot going on in Warbler's Point, and it's never dull. However, Meghan did a fantastic job with this story line. I loved it from the first page to the last, and now can't wait to find out what happens next. Meghan always keeps me on my toes and I never know what to expect, and I truly love that.