Blind Date With A Bear (A Blackwood Brothers Book) by Marie Mason with Giveaway, Excerpt & Review 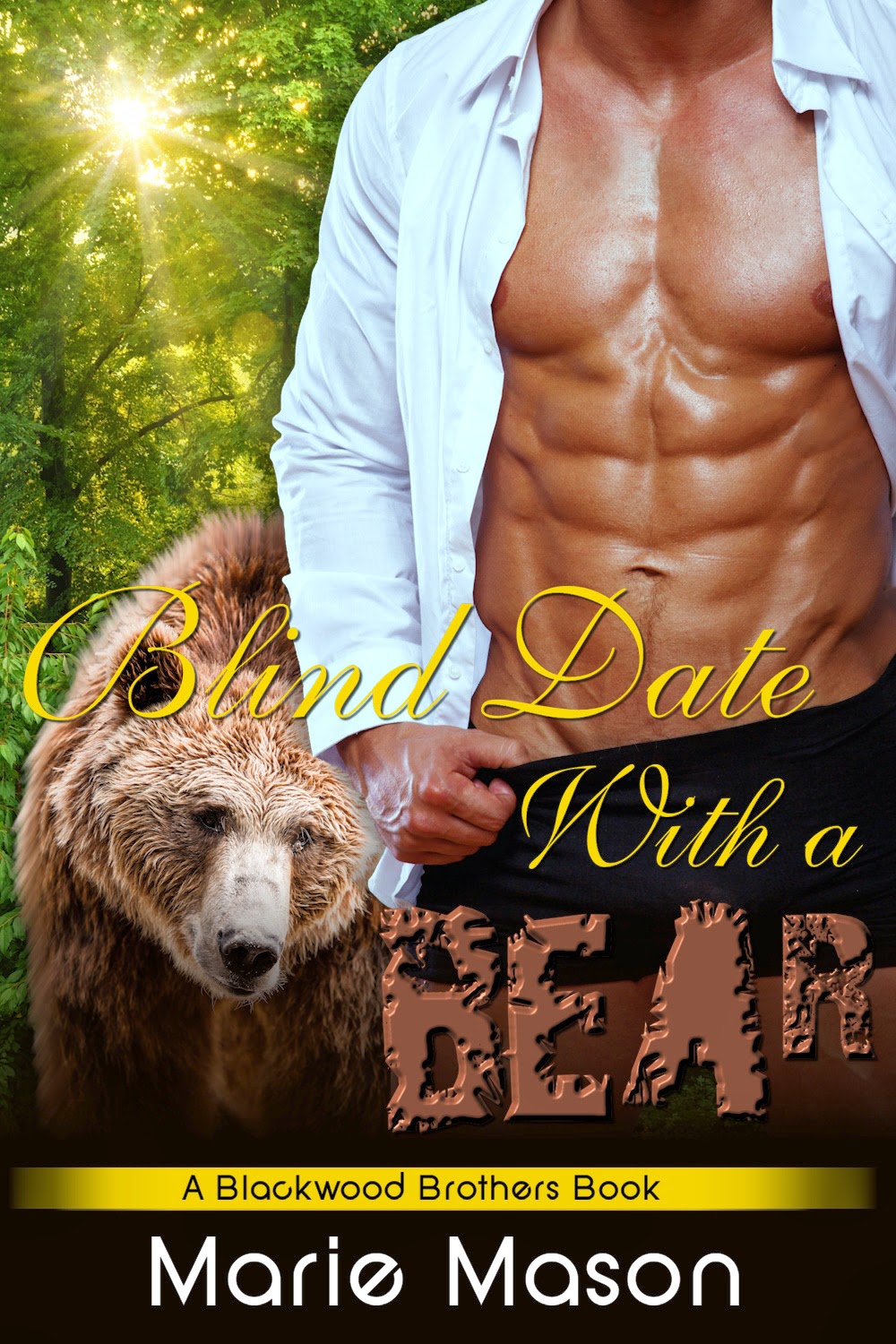 Blurb:
The first blind date Quinn Blackwood’s matching making sister set him up on proved to be his last. The curvy brunette waiting for him at the bar was indeed his true mate.


Even though they had never met, Paige Matthews had nursed a secret crush on her co-worker’s oldest brother since moving to town. She knew the odds were against it, but she couldn’t resist going on a blind date with the big bear shifter. She was heart sore that she wasn’t his true mate but quickly decided to take him up on his offer of a good time. Cause this good-girl wanted nothing more than this bear’s sweet loving.


“Oh, my God, what is this?” Quinn thought he’d died and gone to heaven when the taste of honey melted on his tongue. He looked down at the food he was eating and realized she’d baked a cake. A freaking honey cake. It was gone in two more bites. “I’ve never tasted anything so delicious in my life,” Quinn told her as he licked his lips clean. He eyed her container. “Aren’t you going to share?”


Paige hugged her cake to her breast and laughed. “Not going to happen, big boy,” she replied as she cut off a piece and placed it in her mouth, slowly pulling away the fork. She moaned and closed her eyes, savoring the taste. “So good.”


Quinn was on her in a flash, tossing away the container and dragging her down on the blanket in one coordinated move. He quickly spread her legs, settling himself between them with ease.


“Quinn!” Her hands grabbed his shoulders.


He grinned down at her shocked expression. “Don’t you know better than to tease a hungry bear with the smell of honey?” He bent down and licked her lips and savored the feel of her nails biting into his shoulders.


“There’s more cake in the bag.” Her voice was low and breathless, that same sex phone whisper that had his cock going from hard to a piece of fucking granite in ten seconds flat.


“That’s good to know, but that wasn’t the honey I was talking about.” He moved, dislodging her hands as he slid down her body.


“There’s honey,” he said, kissing the flesh revealed by the low bodice of her dress. He continued his downward path to the peak of her right breast. Taking one taunt bud in his mouth, he sucked it inside, again taking fabric and all as he had in the elevator, making her back arch and her hands fist in his hair. He hardened even more, thinking about her reaction to what he was about to do. He tugged his head from her grasp and her hands fell to her sides. He placed kisses along the rise of her belly, then sat back on his knees, looking at her splayed before him, a feast for him to devour. “And then there’s this honey.”


He put his hands under the hem of her dress that had ridden up past her knees. Giving the soft flesh a hard squeeze, he pushed the light fabric up. “I smell your want, Paige.”


She’d worn one of few matching lingerie sets she owned, a bra and panties in a dark shade of pink that bordered on red. Quinn lowered himself, his mouth urgently burning a trail from her knee to her throbbing pussy. She lost herself in the moment, the warm breeze wafting over her heated skin. The screech of the hawks above and the sounds of the city below faded away. There was nothing except this, this man.


Quinn bit the soft flesh on the inside of her right thigh, and then he was there, his mouth, covering her, his rough tongue licking, sucking her swollen clit through the silk fabric of her panties.


“So sweet, baby,” he murmured. “I want a deeper taste.” He leaned back and lifted her legs over one strong arm. Hooking a thumb beneath the waistband of her underwear, he had them down and off before she could say a word. “Now where was I.”


He lowered her legs back down to the blanket, then parted them, pushing her knees up and spreading her open for his pleasure.


Paige’s body trembled. She was so exposed. She knew she needed to protest, put her legs together. Blush. Something.


This was a really great, fast read. I loved how Quinn was trying so hard to hold back, but that's actually what kept Paige from believing she was his mate. He was trying to court her in a human fashion, because that's what he thought she'd want. But no, too much misinformation on the internet made that impossible. So he was between a rock and a hard place. Paige wanted Quinn like she's never wanted anyone before, but just kept telling herself to go with the moment before he found his mate. Not realizing that even though he had told her she was his, she just wasn't believing it. Marie wrote a great story with a lot of different elements in it. I loved how frustrated Quinn was because he kept getting called away from Paige. It was funny and sexy, a little dangerous and a whole lot of lovin'. I'd love to read more about the other Blackwood Brothers when their books come out. I'm looking forward to it, in fact.


Like many, Marie Mason had always suspected the career that would make her happy would be something to do with writing. And like many, she managed for years to avoid any job connect with writing. Writing is something she has to do every day. It’s a calling, or should she say, it’s the characters calling, whispering…write about me, write about me.