Crash Into Love by Sophia Grey with Review 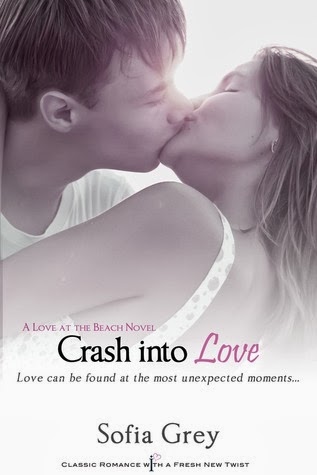 Synopsis:
Cass thought spending a month at a beachside hideaway relaxing and collecting shells would be the perfect escape to finish her novel. When she meets the dark and brooding and much younger Jonah, who's staying next door, her book becomes the last thing on her mind.

Jonah would rather stay home alone than go on vacation with his brother and their friends, but does his best to tolerate the situation after being convinced to go. But when he sees the beauty next door, he can’t avoid his attraction.

Together, they break all the rules, but will Cass be able to bring Jonah out of his shell forever, or will he leave her with only the crash of the surf to keep her company?

My Review: 4 stars
I thought this was a great book. I liked how Jonah was solitary, but couldn't stay away from Cass. Cass was sometimes in her own world while she created her novel, and it was a little strange at first. Then I realized that the story she was writing was connected to what was happening around her and between her and Jonah. Cass is divorcing her husband, and isn't really looking for anyone or anything. But that's usually when you do find someone - when you're not looking. The fact that Jonah is younger than her initially bothers her, but she lets it go, once she realizes how she feels. Jonah has his own issues, and deals with them in his own way, and I can't say that I blame him. I absolutely love the ending to this one, but at the same time, I wanted more Jonah and Cass, not the characters she was writing about.

About Sofia:
I’m a 40-on-the-outside / 20-on-the-inside writer with a passion for love, romance, music, chocolate and good red wine. I live down under in New Zealand in one of the most beautiful parts of the world, and not far from either great locally-made chocolate or fantastic locally-made wine. They have some awesome rock bands down here too.
Posted by Unknown at 1:00 AM