Emily Eck invites you to celebrate the release of Melted & Shattered (L&J #2) with an awesome giveaway and a free download of J Speaks (L&J #1.5) 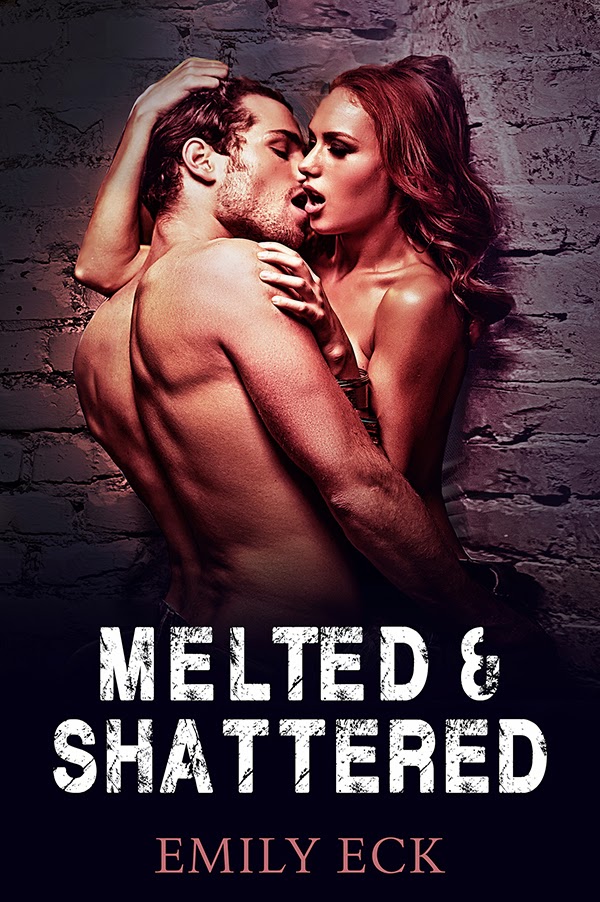 Elle was never broken.
She wasn't shattered.
And she sure as hell never needed to be saved.
That is,
until she found out what the aftermath of love was capable of causing. 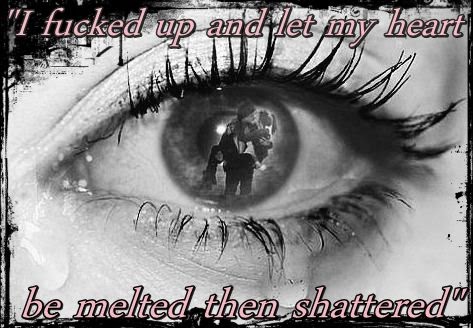 Doing her best to stay afloat amidst the sh!t storm that has become her life, Elle is hanging on by a thread. Between worrying about Fernie’s precarious future, an incident with a Shemar Moore look-alike gone terribly wrong, and an inability to let go of her feelings for J, Elle just can’t seem to get her head straight. Deciding a change of atmosphere is what she needs, Elle heads to Mexico to study abroad for a semester. She has no idea that she is walking into an even worse storm. One that involves a pissed off MC President, a ruthless drug cartel, and a man willing to die to have her light. 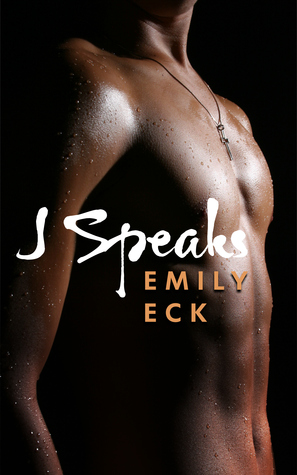 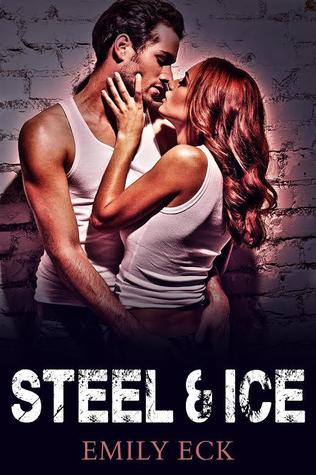 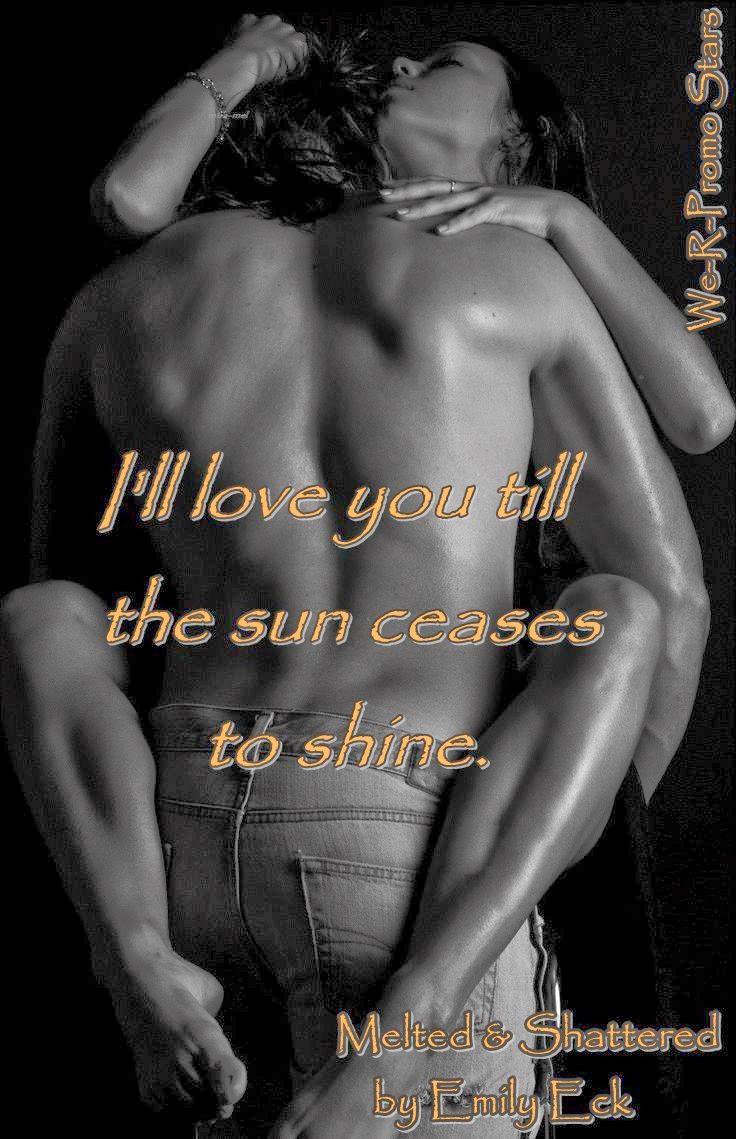 He inhaled sharply, but said in an even voice. “And I can’t lose you before the greatest fight I will ever wage.”
Redemption. Could I absolve him? I lay in a hospital bed for two weeks. All of it at his hands. I’d been marred, though the scar on my skin was not the worst damage. It was a reminder of the scar I’d carried inside. Could he erase that scar? Could he heal a wound one could not see?
There was silence, deafening silence. I tried to keep it together. I used every ounce of energy I had to keep the fire at a low flame, but it blazed through me. He would’ve shot my kid, and I couldn’t let that happen. These kids, they’d become my lifeline. My light.
“Without those kids, I’m just as dark as you.” I said emotionlessly, empty. These last few weeks of pretending during the day, only to come home and sob until sleep graced me was maddening. “I’ve got nothing left to give you, J. Nothing.”
I hung my head, losing the fight with the tears that had been threatening to erupt since J arrived. “I can’t be your light, when I have none.” 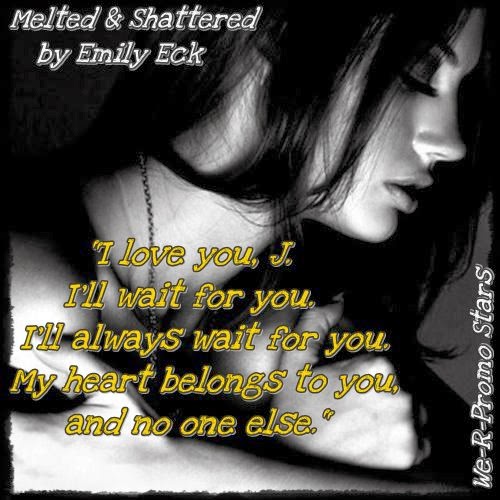 We lay on the floor, two damaged bodies searching for the light. J pulled my head into his hands, bringing us face to face. I could feel his breath against my lips. “You were a comet that bust into my life out of no where” he whispered. “I begged for you. On my knees in the dirt, I groveled to the sky to bring me light. And there you were, at Eight Oh Eight, staring up at me, even though I knew you couldn’t see through the window. I saw you, though. Elle, I saw you long before you saw me.”
“How could I love a killer?”
“How much pain was worth loving this man?
“Please, baby. Please. I need you. I love you. I can’t go into this without knowing you’ll be here when I return.” 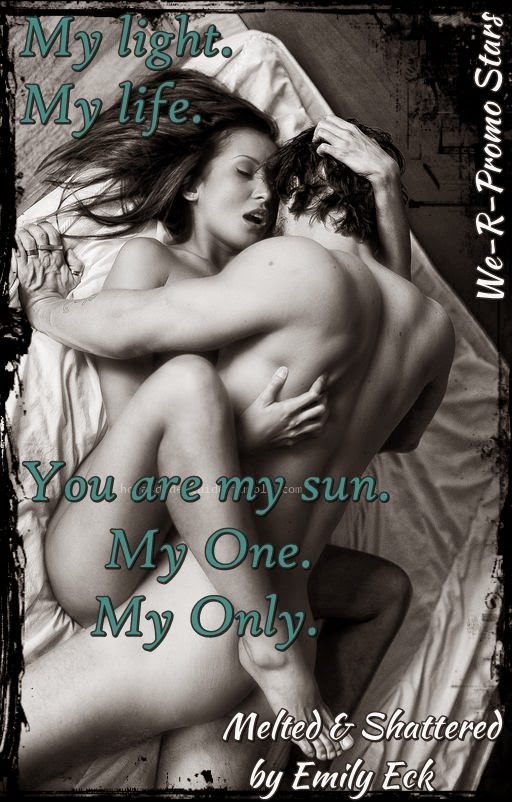 “I’m not sure what to say. I want to tell you I’ll wait. That I’ll be here, waiting like a good girl for you. I want to because I love you. Fuck, I love you.” I turned, finally ready to look him in the eye. “I don’t know where I’ll be. I can’t tell you that. But I can tell you that I love the fuck out of you, and no matter how much I try to stop,” I paused. Fuck this mother fucker. Fuck! God, why was he doing this to me? Angry tears, sad tears, hopeless tears, tears filled with longing fell from my eyes. J caught then with his thumb, but there were too many. They ran over his fingers like a waterfall.
“Fuck, J. I don’t want you to die.”
He pulled me to him, and I inhaled his scent. I’d never be able to smell Acqua di mother fucking Gio again and not think of him. Today it was mixed with the smell of exhaust, like he’d been riding around all night. For what felt like the gazillionth time, I crumbled into his arms. How did two times come to be a number exponentially higher?
“I don’t want to die, baby. I want to fall asleep next to you. I want to wake up next to you. I’m fighting this war for you. To be with you.”

My Review: 5 stars
This is a series that is not to be missed! You do need to start from the first book, Steel & Ice, though. This picks right up where the first book left off. Damn, It made me laugh, cry, want to pound things and people. I understand why Elle did what she did, she needed time. Time away from J to figure out if he really was the one for her, and to get over what had happened previously. Because, really - no one saw that coming. Just being in a relationship was a huge step for Elle. Trying to figure out where she really belonged and what her heart needed and wanted, not so easy. She made some mis-steps, but who doesn’t when they’re trying to figure things out. Unknowingly, Elle put herself in more harm than she was previously in by going where she did.
J knows who and what he wants, he just needs to figure out a way to keep Elle and make certain that she is safe from the people he has associated himself with. J wants Elle to be his future and his only future. He begins the very difficult and complicated task of removing the dangers from his life, so that he can have the woman he will love forever with him. It’s not going to be easy, but he will fight with everything in himself for Elle. He refuses to live without her.
I loved that Elle did figure out exactly who and what she wanted, and made that clear. I loved that Elle found her way back to J, and that he still wanted her as much, if not more, than before. I did NOT expect the end to happen the way it did and am anxiously waiting for the next book in this series to find out what happens next for Elle and J. Emily has gotten me totally hooked on this series, and I love everything about it.

Emily is a Midwestern Gal, but could be anywhere as you read this. She gypsy's the country, as well as south of the border. Adventure feeds her soul, and offers great writing material. She loves kids and working with kids, but can only handle caring for four-legged furry friends. A crazy dog and laid back cat have trained her to be their partner in life. Vices include Swedish Fish, ignoring chores in favor of reading, and caring too much for people in her life. She chose to write this bio in third person as she is an Aries, and found writing in first person ended up with her writing an excessively long life story. Aries like to talk about themselves. It is something Emily is working on being more mindful of.
Blog * Facebook * Goodreads * Twitter