The Arrangement by Bethany-Kris with Giveaway, Excerpt & Review 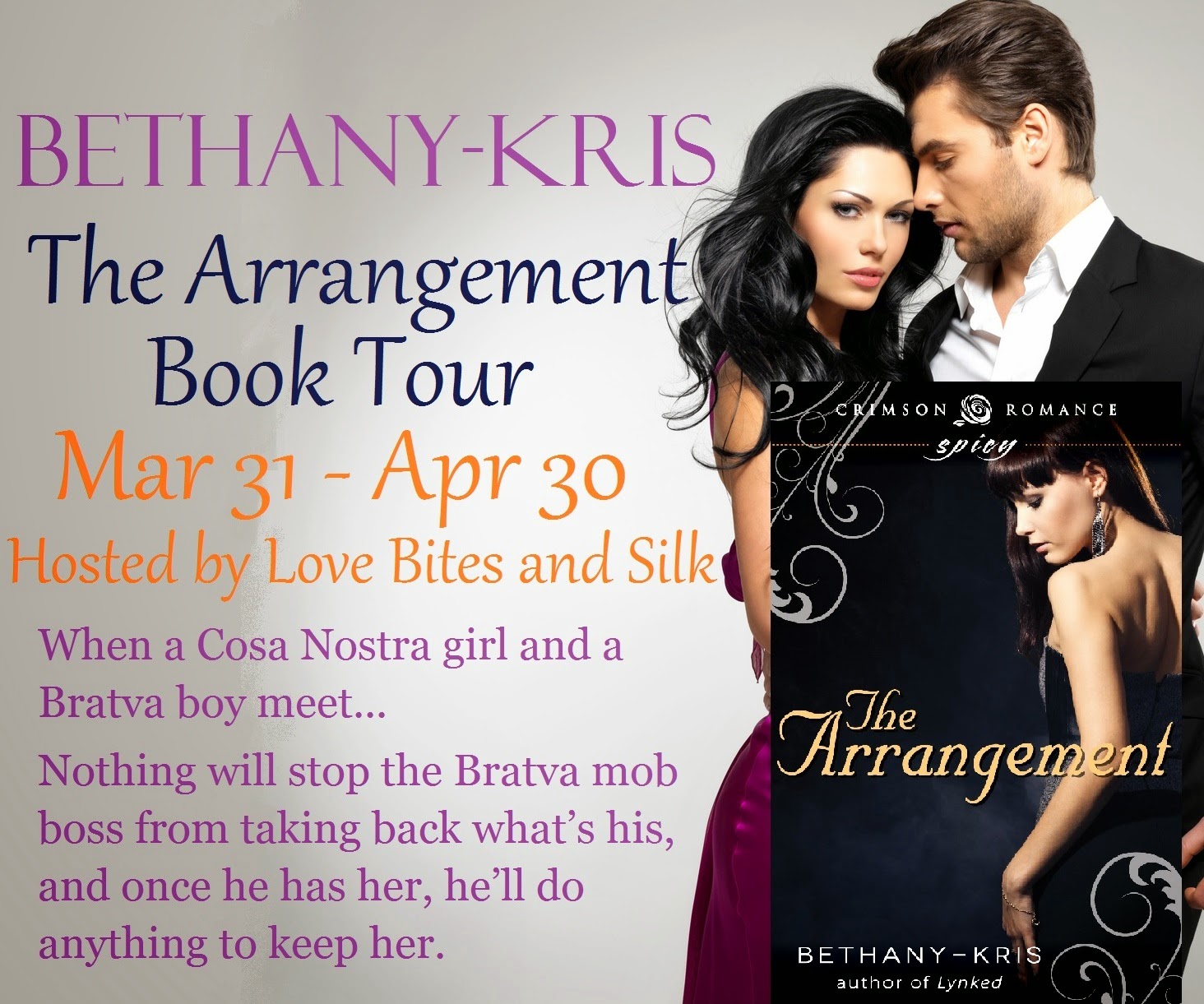 Anton can’t allow the one woman he was supposed to love get away. At the possibility of her death, he steps in to save her with guns blazing, knowing exactly what it might cost him: everything. But it’s been nearly a decade since their last meeting, and he can’t help but wonder if the woman he took back is the same girl he fell for all those years before.

Protected and loved, Vine is unable to forget their shared moments a lifetime ago, or the future she knows they’re owed. When an old flame of Anton’s shows up to rip the veil off the carefully constructed secrets he’d been hiding, she learns that nothing about her life is as it seems. But, that’s nothing compared to the bomb about to blow. Can Vine see beyond the pain and blood to take what she always wanted? And just how far will the mob prince go to keep her safe?

In a world where violence, deceit, and greed reign, your life is not your own, and sometimes, love has to be arranged.
Viviana “Vine” Carducci’s and Anton Avdonin’s marriage was decided more than two decades ago. The deal between leading mafia families has more on the line than anyone knew, even if the Bratva and Cosa Nostra shouldn’t mix. When Vine’s family is murdered and she’s left with nothing more than her grief to survive the mob world alone, she believes the arrangement won’t see the light of day.

Nothing will stop the Bratva mob boss from taking back what’s his, and once he has her, he’ll do anything to keep her…

“Why all the safety precautions if you’re expecting me to live openly here?” she asked. “Doesn’t that defeat the purpose?”
Anton cocked a brow. “I’m hoping your uncle will be a lot less brazen if I’m not keeping you hidden.” He still hadn’t let go of her sides, those teasing thumbs of his rolling gently against the undersides of her breasts in tender motions. “Deny that you want this, too, Vine. You’ve always wanted me. You want this life because you were meant for it, and I have waited more than long enough to get you here living it with me.”
“You’re not giving me a choice. I’ve spent the last three years thinking that this arrangement was over, and then you come in with guns blazing and a house on lockdown, Anton. That’s … It’s not fair. You signed my death warrant doing this.”
Immediately, his hands left her skin. She wanted them back, but her pride wouldn’t allow her to admit that fact. “It was already signed.”
“What?”
Placing his hands to his knees, Anton shook his head and muttered, “He was already getting ready to put out a hit on you. That guard of yours was probably going to be the one to do it to get his in with the family. I was hoping to see you back in the states before I approached you myself, but Sonny didn’t give me the chance.”
No one likes to off a woman, Vine.
She couldn’t help but remember Sam saying that. Would he have done it?
“You can’t possibly know that for sure.”
The look he gave turned her stomach with fear. “I can and I do, Vine. There are men in that organization who are less trustworthy than a snake. Even their eyes and ears can be bought. I stepped in now because I needed to, not because I thought you were ready, or that you wanted me to.”
An ache settled in her chest. How was she supposed to trust him?
“Sonny wouldn’t kill me simply because I wanted to marry you, Anton. I’m not worth a damn thing to him alive, nothing more than a nuisance he has to look after.” Frustrated by his lack of expression, her bitterness rose. “Dead I’m worth even less though, right?”
“Dead you’re worth nothing,” Anton admitted, hurting Viviana a little more. “That is exactly what your uncle wants to achieve. For secrets to remain hidden from his family and for his power to remain intact.”
That only left her more disturbed, emotions rolling from one thing to the next without ever landing on just one feeling. “Our families won’t merge now, regardless if we’re married or not. So you lied to me earlier when you said that’s what this was about. A marriage is only going to cause more issues. I’m worthless to the Bratva; you practically said so yourself.”
“No, you’re worth a great deal, especially if you’re married to me.”
But, why?
“You’re hiding something from me,” she realized, hurt that he was lying again, even if it was by omission. Viviana couldn’t decide which stung worse—that he didn’t trust her, or that he thought she didn’t deserve to know whatever it was. “What aren’t you saying?”
Anton looked stricken, fingers drumming a quick beat on his thighs. “I gave them my word. It was supposed to be them explaining this to you if they desired to—all the reasons and things that happened years ago. It’s not my story to tell, and I promised. My word is all I’m worth if you consider the way I live; without it, I have nothing.”
Reaching out, he cupped a hand over her knee and ran it along the inside of her jittery leg. With his fingers moving so softly against her inner thigh, he pressed his fingertips close enough to her center to make Viviana throb with need. Murmuring, he said, “Can’t you try to trust me? Viviana, you know me … you do.”
She ignored his plea. “Who, Anton?” His fingers pressed harder at her words, grip tightening when Viviana refused to react to his motions. What she really wanted was more. So much more of his hands on her body, but she didn’t dare speak that out loud. “Was it my father, or Nicoli? Who?”
“I can’t answer that right now.” With that, he stood and held out a hand for her to take. “Come, I’ll get you back in bed for the evening. Let you rest and get the last of that sedative out of your system. I promise you’ll feel better in the morning.”
Too exhausted to argue, her palm met his. Anton’s lips touched down to Viviana’s fingers in a flutter of movement. She wouldn’t have noticed the quick kiss had she not felt the heat of his mouth brushing along her sensitive skin. She might as well have been sixteen and falling for him all over again.
Viviana couldn’t figure out if she was willing enough to let him do it. It didn’t help that she wasn’t all too sure if she knew this man anymore. Was he the same one she wanted all those years ago? Had his feelings remained the same nearly a decade later … was that even possible? Could someone want another that much?
What was even more frightening was that with his blue eyes watching, and his hand connected with hers, waiting, Anton still felt like hers.
Just like he always had.

My Review: 4 1/2 stars
This was the first book I've read by this author. I don't normally read about the Mob, but hey, a girl's got to branch out sometimes. This was definitely a great beginning to this series. I loved that even though Vine wasn't the "Princess" any longer, Anton went after her and protected her. They had some definite chemistry between them and that was just to start. Things got way hotter after they were reunited. Anton's ex-girlfriend was a hot, crazy mess. I coudn;t really understand how she thought she had a chance with him at all. There is a lot of action, violence, and oh, so sexy scenes in this book. There were also ups and downs, crazy twists, but I thought it was all great! I definitely enjoyed the story line, since it wasn't something I read a lot about, that made it more interesting to me. The writing was great and pulled me in, the characters were realistic, and I always enjoy that. It helps me connect with them so much better. I completely loved the end, and am looking forward to reading more of Bethany's work.