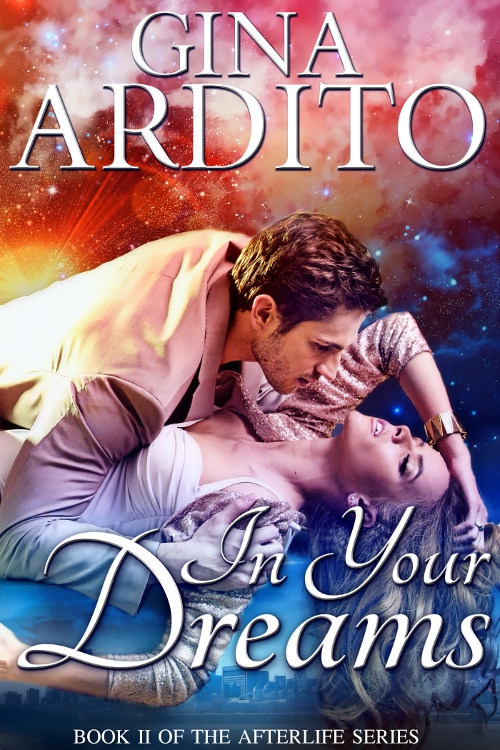 What sacrifice is too dear when the reward is eternal love?

Disillusioned Afterlife bounty hunter, Sean Martino, is transferred to the Probation Department, where he counsels recent suicide attempters by sending them subliminal messages while they're asleep. But he's unprepared to match wits with former child star, Isabelle Fichetti.

It's not every day a woman gets to date a dead man. Although Sean's appearance in her life isn't exactly a dream-come-true for Isabelle, she likes having him around for scintillating conversation and trips to faraway places--all while never leaving her bed. Still, after years of abuse and abandonment, and with no rosy future to look forward to, she's not about to give up on her plan to kill herself just because he asks.

After breaking the rules one too many times, Sean is cut off from all contact with Isabelle, but not before providing her with a reason to live. Now, she'll choose the path her future takes and confront her greatest fear. Alone.

Unless Sean can find a way to fight for her from the other side...

Welcome to the Afterlife, the realm beyond Earth where we all go when we die. For most of us, the Afterlife is like an airport terminal: a stopover before we move on to a new realm or a new lifetime on Earth. But suicides, who’ve screwed up their lives—and the lives of all those they should have touched had they lived—are forced to remain as employees of the Afterlife.

At one time, Sean Martino was a New York City police officer, until the night he mistook a kid’s toy gun for the real thing. Unable to live with the guilt of killing an innocent teen, Sean committed suicide. Now he works in the Probation Department of the Afterlife, counseling humans who’ve attempted suicide but survived. It’s his job to make sure they don’t try again, so they don’t wind up in his situation. Since he’s dead and in a different realm, however, he can’t exactly tap someone on the shoulder and say, “Hey, pal. You don’t wanna do this.

Things’ll look better tomorrow.” Instead, he can only communicate with the living through their dreams.

As the department rookie, he’s totally unprepared to deal with someone like the determined, bitter Isabelle Fichetti. Isabelle was a teen television star, complete with all the heartache and tragedies fame could bring.

These days, she’s washed up in Hollywood, dumped by her soon-to-be ex-husband, and has just been diagnosed with a malignant brain tumor. What’s she got to live for? Nightly visits in her dreams from an old ghost aren’t enough to convince her to stay alive, especially since the tumor will steal her dignity before sending her off into the Big Sleep.

Sean’s going to have to come up with some major magic to change her mind. When Isabelle’s best option is death, what possible dream can he conjure that will compel her to live?

I kill houseplants. There. Now you know one of my greatest shames. I'm not boasting. I just figure that if you're reading this, you're looking for more than how wonderful life is as a writer. So here are a few more of my flaws:

I sing all the time. I sing in the car. In the shower. While I'm grocery shopping. And I headbop while I sing. When I'm not singing, I talk to myself. Just ignore me and move on. You get used to it after a while.

I don't eat my vegetables. Seriously. I'd rather have a cookie.

I'm extremely fair-skinned and could burn under a 60-watt light bulb.

I can't sleep without background noise. If it's too dark and too quiet, all I have are my thoughts.
And even *I* don't want to be alone with my thoughts.

Don't ask me to Zumba, line dance, or march in the parade. I have absolutely no rhythm.

Regrets. I have more than a few.

My favorite activity is sleep. I don't clock a lot of hours, but I powernap like a Persian cat and rejuvenate within ten minutes.

I consider shopping and dining out excellent therapy for anything wrong in my life.

My feet are always cold. Always. My husband claims it's because I'm an alien sent to Earth to destroy him. (He might be right about that.)

Coming to my house for a visit? Unless you've given me plenty of advance notice, be prepared. My floor will not be vacuumed, there will be dishes in my sink, and I only make my bed when I change the sheets once a week (I'm climbing back into it ASAP. Why make it?) Housecleaning is not high on my priority list. Okay, to be totally honest, it's not on the list at all.

I can resist anything...except ice cream.

Since this is our first date, I figure I've revealed enough secrets for now. But if you've read this bio and think I might be the author for you, pick up one of my books or stalk my website: www.ginaardito.com and my personal blog: http://ginaardito.blogspot.com.