The Weekend Proposition by Ella Jade Review with Excerpt 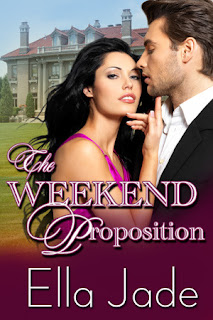 One weekend—no strings, no expectations, and no commitments. On Sunday afternoon it all ends, or does it?No-nonsense businessman Spencer Cannon has a dilemma. He's headed to Connecticut for the weekend to attend his cousin's elaborate wedding. His whole family will be there in addition to his obsessed ex-girlfriend Ava. According to Spencer's brother, Ava has been telling her friends she's planning a magical reunion with her favorite ex-boyfriend. Spencer's not in the mood to deal with her, but he can't miss the wedding. He needs a plan.Struggling Brooklyn waitress and aspiring graphic designer Dakota Vercelli has fallen on hard times. College debts, pending eviction, and her sick mother are taking a toll on her. A chance encounter with Mr. Cannon, CEO of Cannon and Carrington Advertising, leads to a proposition that may be just the thing to solve both of their problems. Spencer's offer—spend four days with him during the wedding festivities and keep his ex off his trail. In return, he'll compensate her generously for her time. He needs a weekend girlfriend, and Dakota needs the cash.It was just supposed to be a business deal, but after sharing a room, kissing under the stars, and attending a wedding, their attraction is undeniable. Will the illusion end when the weekend is over or is the proposition just the beginning?

“I have a proposition for you.”

“A proposition?” What could he possibly have to offer her?

“I have to attend my cousin’s wedding this weekend. Actually, I have to leave tomorrow afternoon. I don’t want to go alone for reasons I don’t wish to discuss right now. I need someone to accompany me. I’m offering that to you.”

He smiled but didn’t say anything. She couldn’t stand the silence. She wanted to figure out his game. There had to be some sort of catch.

“You want me to go to a wedding with you?”

“It’s in Connecticut. I would require your services until Sunday afternoon. All of your expenses would be paid, including a wardrobe which would be yours to keep after the weekend.”

“I would need you to appear as my girlfriend.”

“I wouldn’t joke about something like this. I’ve thought the entire thing through.”

“A man who looks like you should have no problem finding a real girlfriend to buy clothes for and flaunt in front of his family.” She thought for a moment. “Unless there’s something wrong with you.”

“There’s nothing wrong with me.” He raised his voice a bit. “I had planned on attending alone but circumstances have changed. I’m in a bind and from what I gather, you are too.”

Her instincts screamed to run in the opposite direction. She’d never been the type to fall for a scam. “I’m not interested in—”

“I’ll pay you two hundred and fifty thousand dollars for your time.”

“What?” Apparently a side of crazy came with those good looks.

“One hundred and twenty-five thousand today, if you agree.” He pulled out a check from the inside pocket of the jacket he had draped on the back of the chair. He slipped the mint green paper across the table. “You’ll get the rest on Sunday afternoon.”

“That’s fifty grand a day.” She studied the check. It would take her years to make that kind of money working these shit-end jobs.

“I’m aware.” He nodded as if the money meant nothing. “I’m asking for your time, a commodity I believe should be well compensated.”

Too good to be true.

“Do you make it a habit of paying women to be your girlfriend?”

“Pretend girlfriend,” he reminded her. “You would be the first.”

“What exactly do you expect me to do for that money?”

“I told you.” He narrowed his eyes. “I need a date for a long weekend. Everyone needs to think we’re a couple.”

“You’re willing to pay me to go away with you for four days. I’m supposed to take your word we’re going to a wedding in Connecticut? How do I know you won’t kidnap me and want to do all sorts of kinky stuff to me? You could be some sex-obsessed lunatic.”


“Do you like that sort of thing?” He tried to conceal his smirk.

My Review: 4 1/2 stars
This was a great book to pass away the afternoon. I like the fact that Spencer was willing to help Coda and it all started out very practically. Business, just business. Little does Spencer know that his pretend girlfriend is a lot more than meets the eye. She may just be what he really needs to open up and let go. Unfortuately for Spencer and Coda, his ex (the reason he made a deal with Coda in the first place) is a mean, vindictive bitch, who just can't seem to stoop low enough when trying to get Spencer back where she wants him. Luckily for Spencer and Coda, they have plans of their own, which they try not to let anyone else interfere with. Things get a little more complicated when they decide not to fight the attraction between them. Coda turns out to be exactly what Spencer needs, and the same is true for Coda. Hopefully they can see past their "deal " to see the real opportunity they have, in more ways than one. 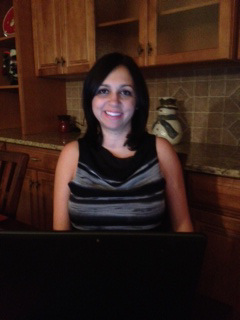 Ella Jade has been writing for as long as she can remember. As a child, she often had a notebook and pen with her, and now as an adult, the laptop is never far. The plots and dialogue have always played out in her head, but she never knew what to do with them. That all changed when she discovered the eBook industry. She started penning novels at a rapid pace and now she can't be stopped.

Ella resides in New Jersey with her husband and two young boys. When she's not chasing after her kids, she's busy writing, attending PTO meetings, kickboxing, and scrapbooking. She hopes you'll get lost in her words.

Stop by and check out some of the other stops on this Tour here:
http://fireandicebooktours.wordpress.com/2013/09/07/sign-up-to-host-the-weekend-proposition-by-ella-jade-erotic-contemporary-romance/
Posted by Unknown at 1:00 AM