The Guardian Series by Wendy Owens with Review of Book 1 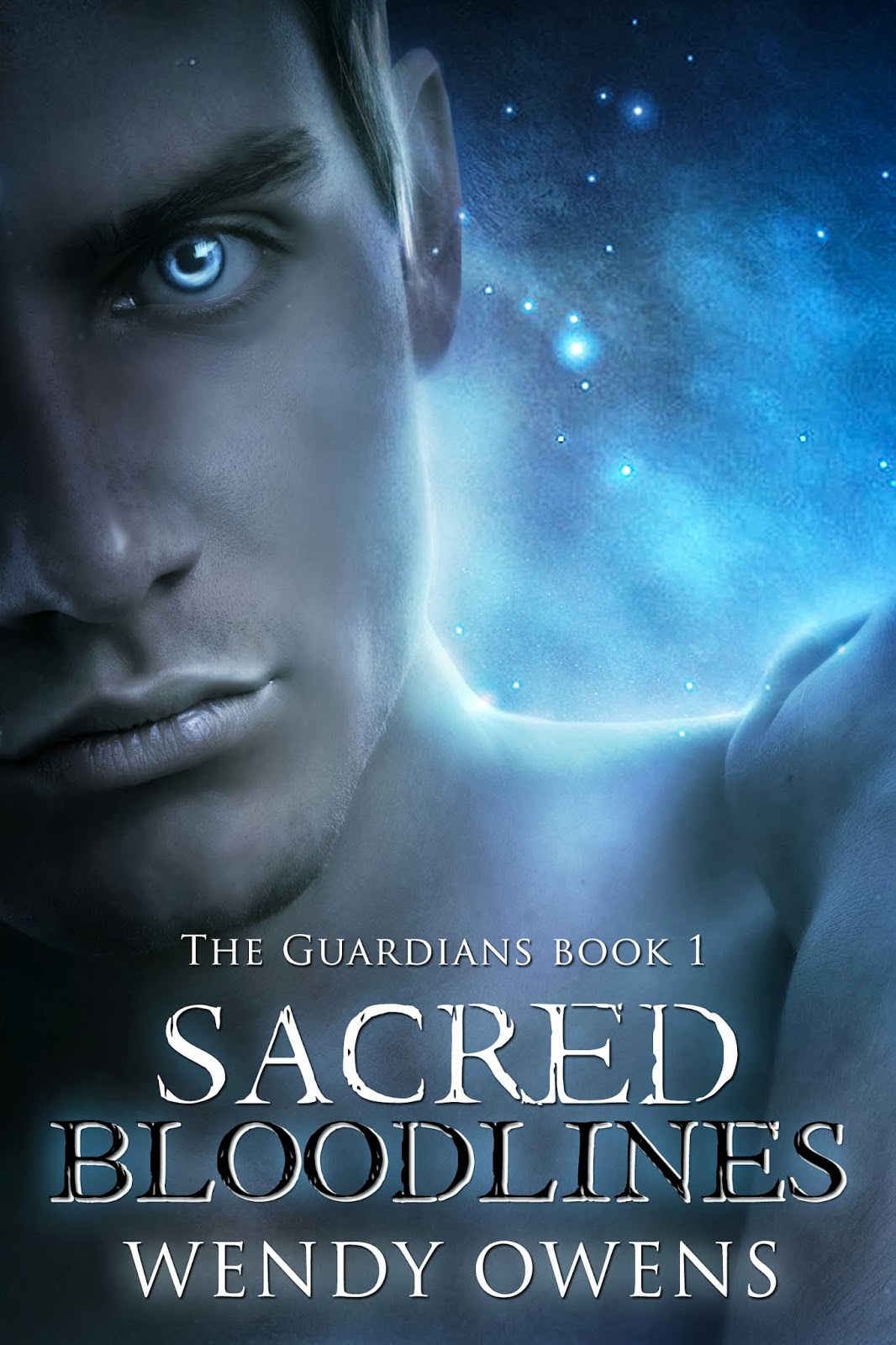 Blurb:
Tragedy has defined Gabe's short existence in this world. An ominous darkness lurked on the edge of his existence until one day in a subway, strange things start happening. A series of events lead Gabe into a new and fascinating life filled with angels and demons, but he isn't sure if he wants to be a part of it.

Gabe is thrust into the middle of this exciting world that is full of things he has longed for in his life but it comes with a price. This new life also promises constant terrifying dangers that Gabe fears he may not be able to survive.

Feeling confident the danger had passed, Gabe climbed up onto the seat. He pulled the handle, pushing the heavy door open with his feet. On the ground in front of him, he saw Uri on his knees clutching an unconscious Sophie. Nearby, there was a small mountain of ash.
“Is she ...” Gabe paused, unsure what to even ask. None of what had just happened made any sense.
“Help me get her in the back,” Uri said with a strained voice, motioning to him.
Gabe quickly ran to Uri’s side and swung around to hold her feet. Uri climbed in first, pulling Sophie in behind him as Gabe guided the rest of her. Gabe thought about how he had admired her boot clad feet when he first saw her. He wished with everything in him that she would be all right.
“You come around this side and hold her head,” Uri beckoned.
Gabe made sure Sophie’s lower half was securely in the car, then closed the door as gently as he could. He rushed to the other side of the car to take Uri’s place. As he came around the back, he saw two more piles of ash where the creatures that were looking at him had been.
He hesitated for a moment as Uri stepped out of the way, allowing Gabe to slide into place, cradling Sophie’s head in his lap. Even lifeless, she was beautiful, Gabe thought. Her skin was so pale; it had a gorgeous alabaster quality to it. He wasn’t sure how she did it, but he knew she had saved him.
Uri jumped quickly behind the wheel and searched frantically for the keys. Gabe saw they were still dangling from the ignition. Leaning forward, he placed a hand on Uri’s shoulder. Uri looked back at him; Gabe could see the worry in his eyes. Gabe motioned toward the keys, slightly clearing his throat. Uri looked down and with a sigh started the car, pulling back out onto the deserted road. Minutes passed with Uri frantically checking over his shoulder.
“How is she?” he finally asked Gabe.
Gabe looked at Sophie’s body, lying there, unsure how to even answer that question.
“Seems to be the same,” he responded honestly. “I don’t understand. What happened to her?”
Uri stared at the road.
“There’s a lot you don’t understand right now, Gabe,” Uri answered, clearly not wanting to deal with a bunch of questions. “All you need to know is Soph used every ounce of power she had to save us.”
All of the questions Gabe had wanted answers to suddenly didn’t seem important. He leaned forward and noticed Uri had increased their speed to just over one hundred miles per hour, Gabe thought it prudent to say something.
“What if we get pulled over? Might be hard to explain what’s wrong with her.” Gabe had dealt with the cops enough in his life. He knew what it would be like trying to explain a half dead girl in the back seat.
“Right, right,” Uri responded without changing speed.
“Caecus,” Uri stated in a powerful voice.
“What?” Gabe asked.
“Oh,” Uri responded realizing Gabe had no idea what was happening. As they sped down the street, Uri searched for the words.
“Look, I know this is all must seem pretty messed up and I want to explain everything, really I do, but I think it’s better if you wait and talk to Michael.”
“Can you at least tell me what you just said? I heard Sophie say something back at the roadside I didn’t understand either,” Gabe pleaded.
“At the manor we learn a lot of things, one of the things they teach us ... some might call ... spells.”
“Like magic?” Gabe asked, trying not to laugh. The more he thought about it the less funny it seemed. After everything he had seen, did it really seem so impossible that magic existed?
“I suppose, but it’s the source behind our magic that makes it work. It’s a divine power,” Uri explained, increasing his speed even more. “I promise, if you have any questions after talking to Michael, I will answer them for you. He’s the best one to explain all of this. I put an incantation on the car so it’s invisible.”
“Yeah, right, we’re invisible,” Gabe said in disbelief, but then suddenly remembered back to the subway and how the officers seemed to not even notice them. “Wait, like you did in the city, with all those police officers?”
Uri glanced back at Gabe, his worry giving way for a moment to an impressed stare. “Exactly, I used a distraction spell on them allowing us to sneak by cloaked.”
“So that scream wasn’t real?” Gabe asked. Uri nodded his head affirmatively.
Gabe’s head felt like it was spinning. Monsters. Magic. He had always worried about the evils he had known in the world. Now it appeared there were unknowns that he always thought were make believe to worry about, too.
He leaned back and looked at Sophie’s face, as he did, his thoughts seemed to calm. He began to stroke her auburn hair, admiring how soft it was. Captivated by Sophie, he didn’t realize his hands had begun to burn. He heard Uri’s muffled voice and as he looked up at him, he felt an overwhelming feeling of nausea and realized everything had become blurry.
Uri was turned, looking at him, shouting something, but at that point, Gabe couldn’t hear him. A moment later, Gabe felt like the car was spinning uncontrollably. The nausea overcame him and he seriously thought he might be sick. He looked down at Sophie to make sure she was still all right. His hands were holding her head gently, but they no longer seemed like his hands. There was a glowing, blue light coming from his palms. He began to hyperventilate. Everything went black.


My Review: 3 stars
This was an interesting book. First in the series, as I understand it. There are four more after this one. I will have to say that when I started reading I was intrigued. I mean, who sees people with shadows around them and then bad things happen? Apparently Gabe does. And he's not the only one. Uri finds him and takes him back to where there are others like him. But then Gabe finds out about the prophecy, and his role in it. I'm not good with religious books, so this really wasn't my cup of tea. Wendy's writing was good and the story moved along at a good pace. Always something new happening. I thought it interesting that Wendy used Angel names for most of the Guardians. Blurb:
Some people are born into love, some people are born into war, when Gabe discovered he was a Guardian Angel, his life was suddenly thrust into both. If this hidden war wasn't enough to deal with, Gabe learns he is fated to be the great protector who will one day deliver the last prophet to either safety or death. All of these revelations didn't matter for Gabe, he only cared that his new life included Sophie.

Sophie and Gabe grew closer over the summer. She is now a fixture in his life that keeps him moving forward. Evil doesn't stop stalking him just because he found happiness. This time darkness finds it's way into Rampart manor and Gabe will have to decide if he is willing to risk everything to try and stop it. 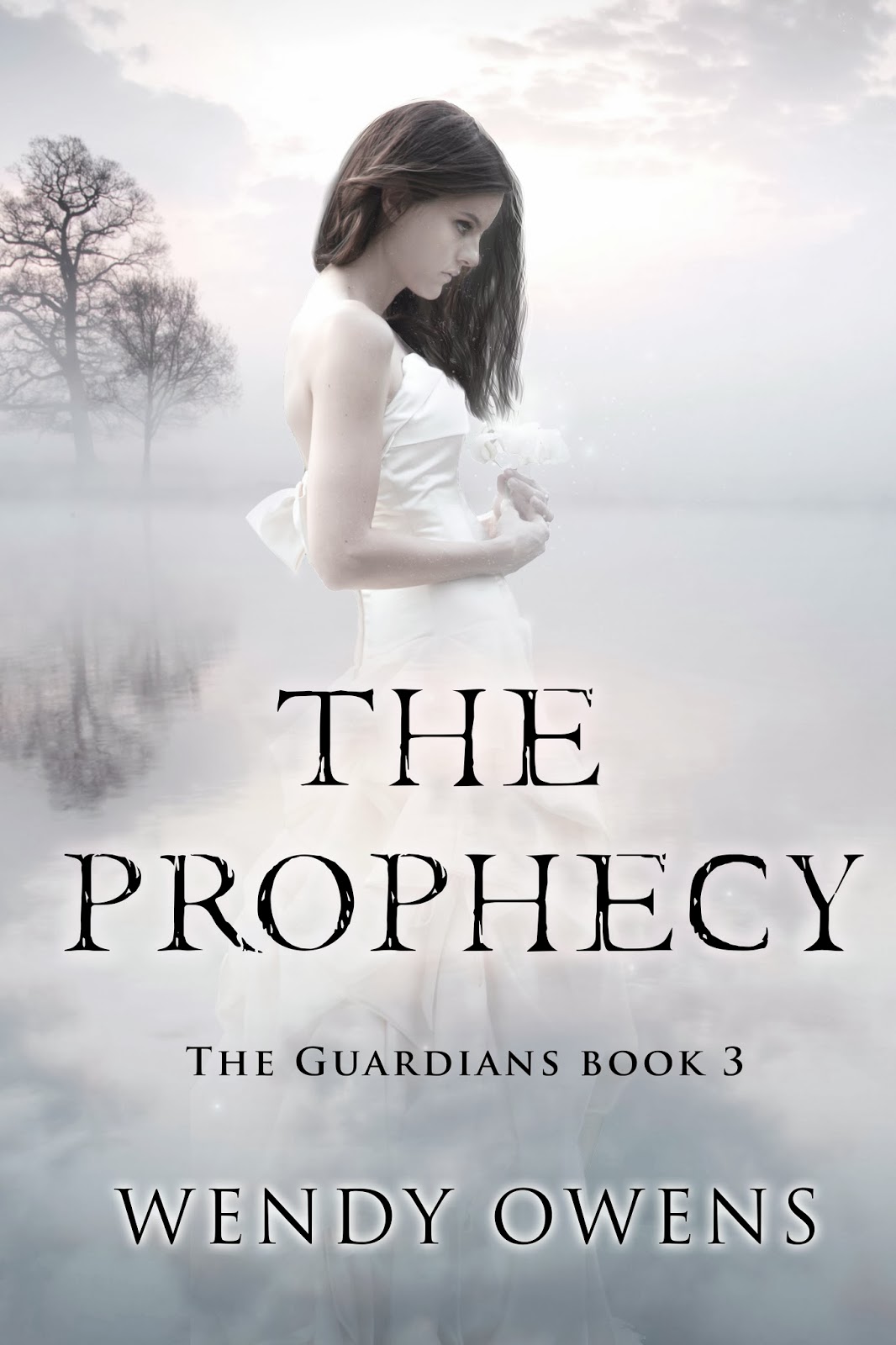 Blurb:
Five years have passed since Gabe abandoned Rampart, deserting his destiny and closest friends. The struggles Gabe has endured to stay alive have changed him, hardening him into a man unwilling to trust anyone or anything, dealing with difficulties connecting with the outside world.
Gabe has finally found a certain paradise--a peace in solitude--until a familiar stranger shows up on his doorstep, pleading for Gabe's help.

Now he has to decide if he is truly content in his new life, or if he is willing to risk his solitary happiness for a little piece of the world he left behind.

Should he choose to accept the most important duty of his life, one failure could mark the beginning of the end for all mankind. 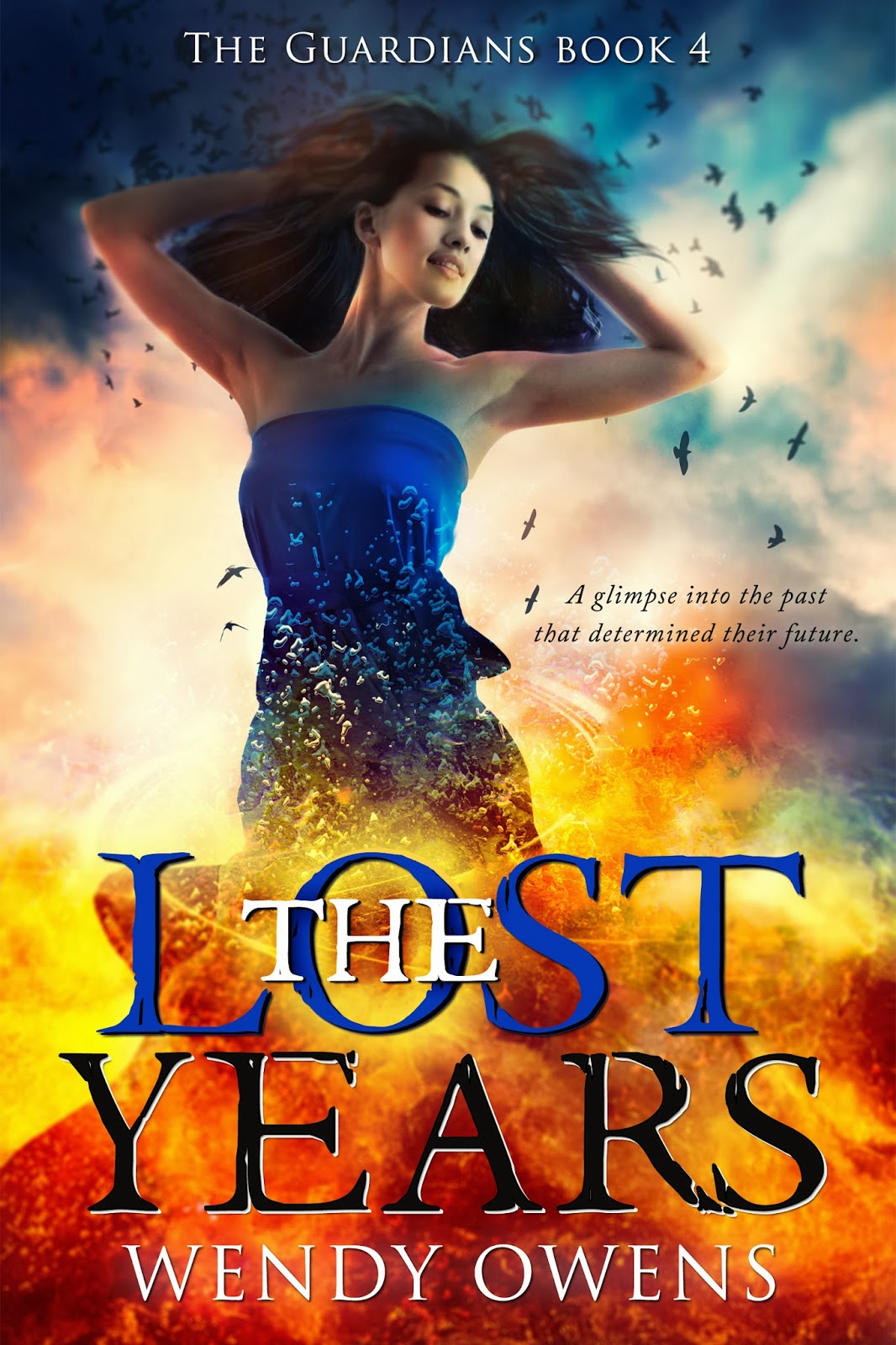 Blurb:
Gabe's world was forever altered by the people he came to know and love at Rampart Manor. Although, it wasn't only his life that was changed when he made the choice to leave them all behind.

During his five year absence, they each had a battle with personal demons. Dina is faced with a moral dilemma, the path of good leading to certain heartbreak, or evil, and a possibility of happiness.

Uri meets a mysterious woman who seems to have a lot of the answers that he has been searching for, and she certainly has a place in his heart, if he can only hold onto her.

Sophie is faced with choices she never knew would be so difficult. The question now is: will the personal demons of the remaining Guardians of Rampart be too much for them to overcome? 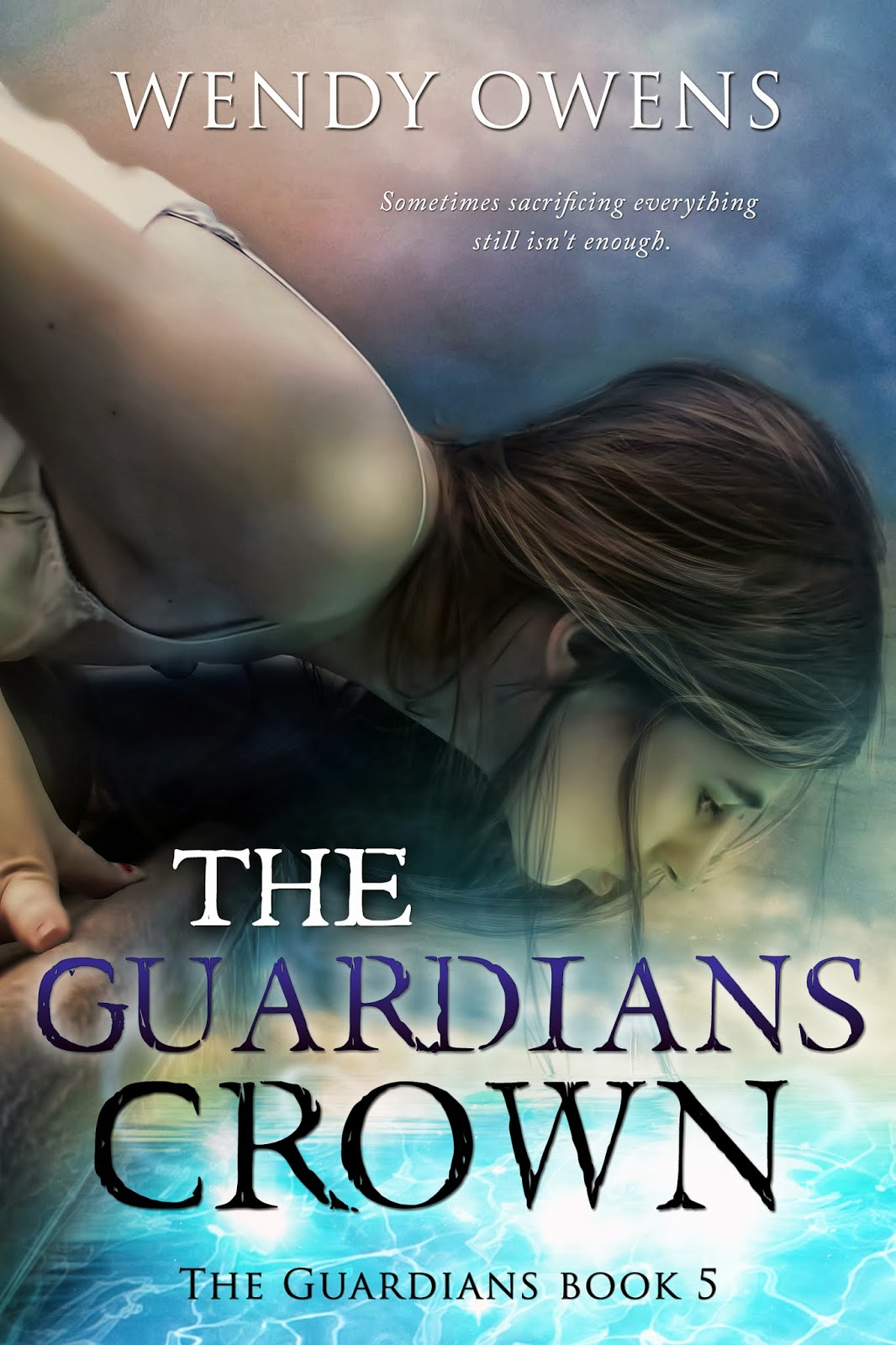 Blurb:
Gabe is finally forced to answer the ultimate question, will he give his life to save the world? What about just to save the one he loves the most? The Guardians struggle to find another way--ideas that don't involve Gabe's death--to defeat Baal. Time is running out. What will Gabe choose? What price will he pay for that choice? 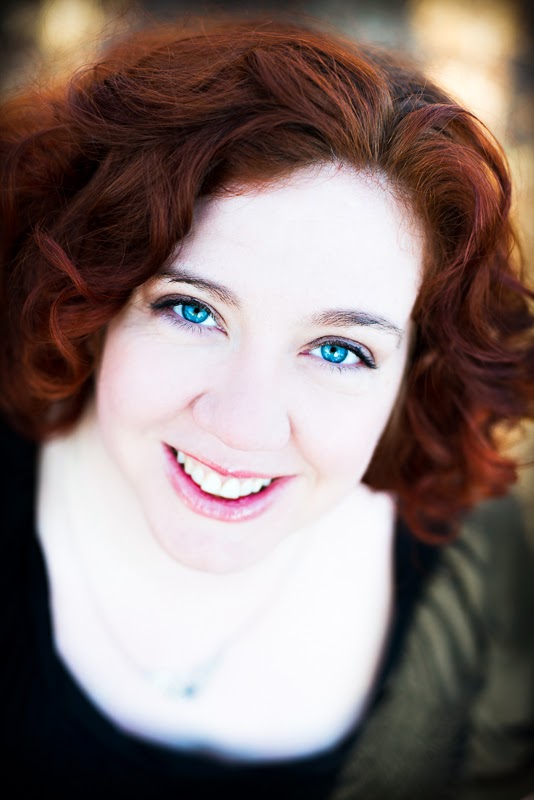 Wendy Owens was raised in the small college town of Oxford, Ohio. After attending Miami University, Wendy went on to a career in the visual arts. After several years of creating and selling her own artwork, she gave her first love, writing, a try.
Since 2011, she has published a young adult paranormal series, The Guardians, which will contain five books total, as well as a novella.
Wendy now happily spends her days writing—her loving dachshund, Piper, curled up at her feet. When she's not writing, she can be found spending time with her tech geek husband and their three amazing kids, exploring the city she loves to call home: Cincinnati, OH.
Author Links:
Website: http://wendy-owens.com/
Twitter: https://twitter.com/WendyLOwens
Facebook: https://www.facebook.com/pages/Wendy-L-Owens/191731754221996?fref=ts
Goodreads: http://www.goodreads.com/author/show/5038955.Wendy_Owens