Flirting with Danger (Firefighters of Adelaide, #1) by Claire Baxter Review with Excerpt & Giveaway 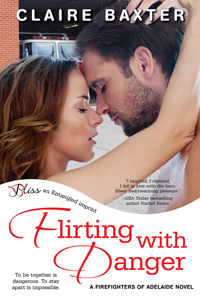 Book Description:
To be together is dangerous. To stay apart is impossible.
Firefighter Jasmine Mackinnon has always just been one of the guys. So no one’s more shocked than she is to find herself kissing fellow firefighter and all-around sinfully handsome playboy Aaron Parkes after a friend’s wedding. Jasmine knows she can’t risk an emotional connection with a colleague—a potentially dangerous entanglement when fighting fires together—and nothing's more important to her than her job.
Aaron never noticed how beautiful Jasmine was until he saw her out of her firefighter duds, but there’s something about the fiery woman that tempts him. Though he knows pursuing a real relationship is out of the question for a serial dater like him, when their casual flirtation builds into something more serious, it's not just their jobs or their safety on the line. It's their hearts.

In a bedroom of a sprawling sandstone house in South Australia, Jasmine Mackinnon looked at the reflection of her friend and fellow bridesmaid, who was peering over her shoulder.

“I get plenty of smoke on my face when I’m on a call-out. I don’t need to add more.”

“No, not when you’re at work, obviously,” Sasha said as she straightened. “But you could make an effort when we go out.”

Jasmine winced. “I do make an effort.”

“Oh, I know. I didn’t mean it like that.” Sasha pulled an apologetic face. “Okay, maybe I did, but I was trying to be helpful. You’re so pretty, but you don’t make the most of what you have. Look, what I mean is that you might find your Mr. Right if you went for a more feminine look.”

Not very often, in Jasmine’s experience. She hoped Leanne and Michael, today’s bride and groom, would make it, but it wasn’t a risk she was prepared to take for herself. Not unless she found a man she could trust completely, and they were few and far between.

Sighing, she said, “If I find a man to love me as I am, then great. But I’m not going to pretend to be something I’m not.”

Jasmine studied her reflection as the makeup artist blended blush beneath her cheekbones. Which made her look as if she actually had cheekbones. She’d bet that, given a choice between muscles and makeup on their women, most men would not choose muscles. But messing around with all those brushes and jars—it just wasn’t her style. Any man she allowed into her life would have to want the real her no matter what she did or didn’t slap on her face.

Sasha was on a roll now. “Okay, I can see your point, but first impressions are important, aren’t they? You need to get past the first hurdle before you can really get to know someone. All I’m saying is, you might meet more men if you looked as if you cared what they thought of you. And you could be a bit more encouraging when men do try to talk to you. You could give them a chance. Like that poor man in the pub last week.”
Jasmine swiveled the chair. “What man?”

“The one with the Johnny Depp jaw.”

She screwed up her eyes. “Can’t say I remember him.”

“Oh! You mean when we were watching the game on the big screen?”

“I didn’t notice his jaw; I was too busy paying attention to the football.”

“Trust me, he was cute. And he tried to start a conversation with you.”

Jasmine frowned. “Did he?”

“He asked you what you did for a living.”

She nodded. “That’s right. I remember.”

“My point exactly. No wonder he took off like he’d been spat out.”

“The scores were level. It was a crucial point.”

The door of the en-suite bathroom opened and Leanne, the bride, emerged, wrapped in a toweling robe, and, like Jasmine and Sasha, sporting large rollers in her hair. “What did I miss?”

“I was just telling Jasmine that she frightens men off when they try to talk to her.”

Nodding, Leanne pulled up a chair. “Well, it’s not really her fault that she intimidates them, is it? She’s so…”
“Capable,” Sasha supplied.

“Hello. I’m still in the room.” Jasmine frowned. “And since when was being capable a bad thing?”

“It’s not, generally, but you don’t give men a chance to be men around you.”

“No, it’s true,” Leanne said. “You’re good at most things they’d consider men’s stuff. Heck, you can probably bench press more than some of them. You even do a job that a lot of men wouldn’t have the guts to do. You make them feel inadequate.”

Jasmine nodded. Her friendship with Leanne and Sasha went back as long as she could remember, and she’d never doubt their motives for a moment.

“We’re just saying that it’s going to be tough for you to find a man who’s secure enough in his own masculinity to cope with all that.”

“Unless you’re smart, like me, and marry a firefighter,” Leanne said with a smile.

“She’s right,” Sasha said. “And there are some good-looking guys in your station. What about Kane? He’s cute.”

“Not by much. All right, how about Aaron, then? Ooh, Aaron.” Sasha fanned herself. “He has all the right credentials. Tall, dark, and—”

“Dangerous,” Leanne interrupted. “Tall, dark, and dangerous. Strictly no strings, that’s Aaron Parkes. He could charm the skin off a rice pudding, but he thinks having breakfast with a woman the morning after is long-term.”

“Isn’t that what makes him irresistible?” Sasha said. “You know, the thrill of being the one to hook him? Maybe he just hasn’t found the right woman yet?”

“He’s not looking,” Jasmine said. “Trust me, he’s happy the way he is. I should know; I have to listen to him bragging about his conquests at work. They’re all the same, and they don’t seem to care that he’s only interested in one thing.”

Leanne shook her head. “Forget about him. I wouldn’t want to see Jasmine dating Aaron. It could only end in tears, and then we’d have to kill him.”

“I have no intention of dating him,” Jasmine said. She wouldn’t dream of becoming a notch on Aaron’s bedpost—if there was even any bedpost left to carve a notch in. “Anyway, there’s no way I’d go out with a colleague at all. Not Aaron, not anybody. Workplace romances get messy, and in a job like ours, messy is the last thing we need. We have to be able to rely on each other in life-threatening situations—would you trust a colleague to save your life if his girlfriend was in danger as well?” She shook her head. “Of course you wouldn’t. Plus, dating’s not allowed. Not between people who work in the same team like Aaron and I do.”

My Review:  4 1/2 stars
This was a good romance. I liked that Jasmine and Aaron were attracted to each other, but fought that attraction. The reasons they both have are sound and practical, but in the end just meant to keep others away from their hearts. Early on there's a shift to their relationship that they both try to reason away. Then they both decide to change their behaviors, and they come away wanting more without ever having crossed a line. Claire did a fantastic job writing this story that is about love, life lessons and learning when to let go of the past, so that your future doesn't slip away. I loved it. 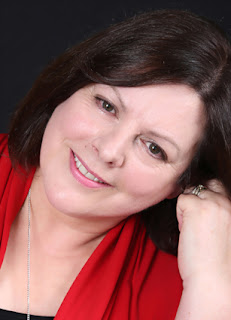 Claire Baxter writes contemporary romantic fiction of all lengths. Her short stories have been published in commercial women's magazines around the world, while her novels have been translated into 20 languages and have been nominated in the Romance Writers of Australia's Romantic Book of the Year Award, the RT Book Reviews Reviewers' Choice Awards, and the Cataromance Reviewers' Choice Awards (Winner, Best Harlequin Romance).
Before following her passion to write full-time, Claire was an award-winning corporate communications manager. Earlier, she worked as a translator and a PA.
Claire grew up in Warwickshire, England, but for more than 20 years has called Australia home. She considers herself lucky to live near one of Adelaide's beautiful metropolitan beaches where she loves to walk and think up stories.
Website: http://clairebaxter.com 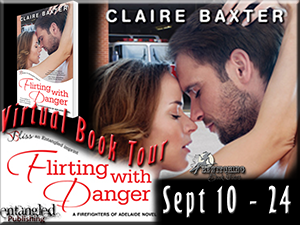