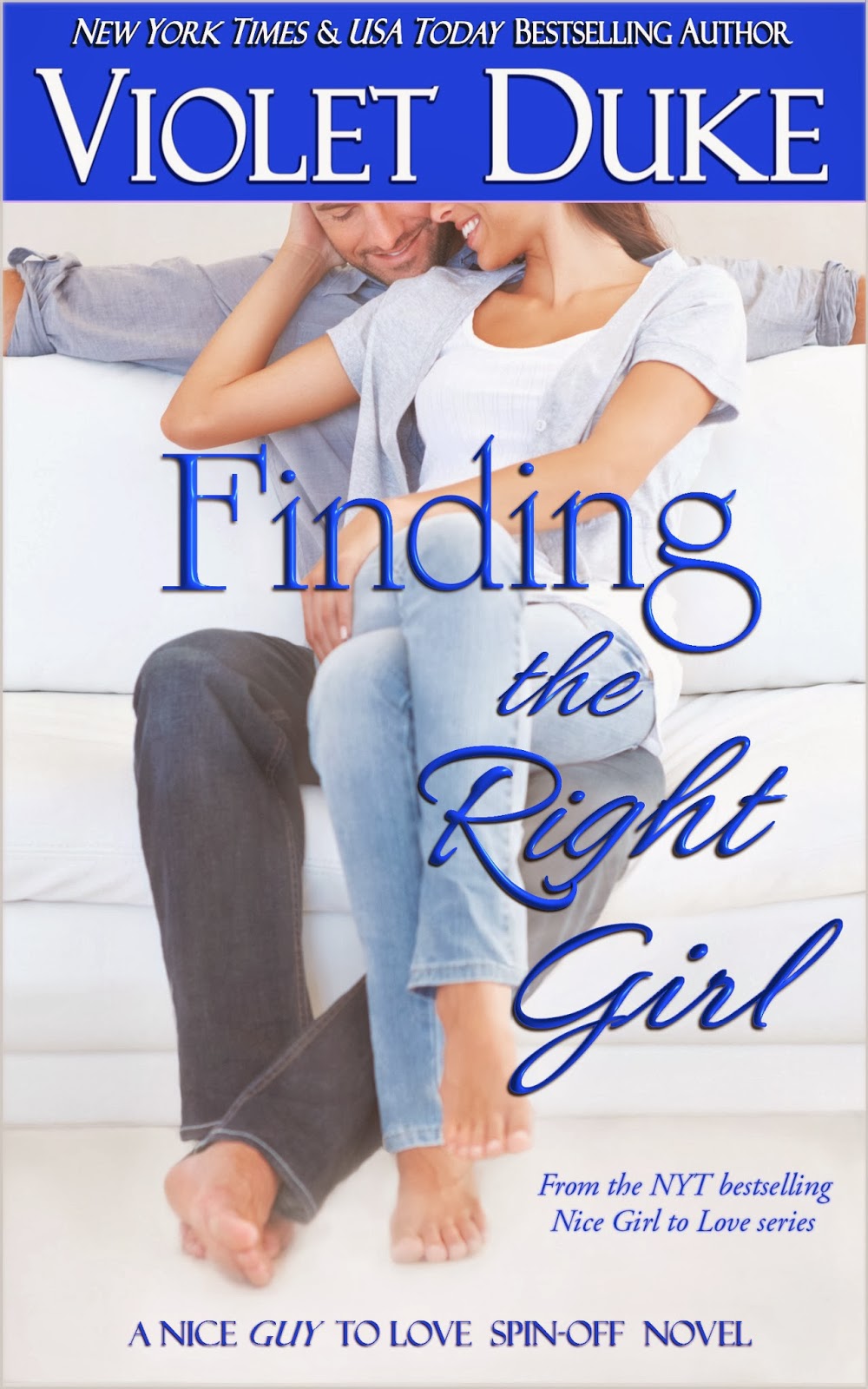 Blurb
From the New York Times & USA Today bestselling author who brought you the Nice Girl to Love trilogy, comes a Nice GUY to Love spin-off…

Brian Sullivan has been in love twice in his lifetime.  He lost his first love to early-onset Huntington’s, and he lost the other more recently…to his brother.  And somehow, his heart has managed to heal itself after both.  Amazingly, without therapy.  That doesn’t mean he hasn’t gotten more wary along the way, however.  In fact, he’s been thinking lately that maybe his brother’s now retired nothing-but-flings rule isn’t such a bad idea.  Unfortunately, being the nice guy poster boy and all, Brian isn’t exactly versed in the fine art of flings.  So he looks to the outrageously ‘unique,’ provokingly button-pushing Tessa Daniels for a crash course.

There’s absolutely no way he’s falling in love with this one…right?

Tessa has no idea what she was thinking telling Brian that she was some sort of fling expert.  She’s never been flung before and she sure as heck doesn’t know where or how to begin flinging a guy like Brian.  It was a temporary lapse in sanity, really—no doubt because of the can’t-help-but-fall-for-him brain fuzz that hits her whenever he’s around.  Not only does the man have her being more herself than she’s ever been in her life, but he’s the only person she knows who seems to have as many demons and skeletons in the closet as she does.  What’s more, he’s got her thinking of the one thing she stopped letting herself even hope for years ago.

A happily ever after.


Excerpt:
“Babe we can’t,” he somehow managed to punch out.  Voice gravelly, he drew his hands back to safer territory and said roughly, “You're hurting and your emotions have gone through the wringer tonight.  I can't take advantage of you like that.”
And yet still, he couldn’t bear to let her go completely.
“Then don't,” she replied simply, arms twining around his shoulders.  “Let me take advantage of you.”
Jerking back to put some head-clearing distance between them was about as painful as ripping off his own skin.
“Sweetheart, why don’t we just hang out tonight?  We can sit and talk more about those dickheads we ran into tonight if it’ll help, or we could just watch a movie…anything you want to do.”
He quickly snatched her wandering hands as they traveled down his lats and started tugging at the hem of his t-shirt.  “Anything except that,” he groaned.  “Work with me here, woman.”  Raggedly, he put his forehead against hers and counted to ten to try and find the tattered remains of his restraint.
The thought almost made him laugh.  Who was he kidding?  He had no restraint when it came to Tessa.  By the fifth second, his lips had already found their way back to hers.
And goddammit if her whole body didn’t just tremble right there in his arms.
She was just so mind-wreckingly responsive.  As usual, without even trying, she was driving him batshit crazy.
Tapping into a reserve even he didn’t know he had, he broke off the kiss and took another step away from her.
Then he watched in sad disbelief as her expression became completely shuttered a half an instant later—closing him out behind the walls of a now ten-story castle and a moat filled with fire-breathing piranhas.
The lightning quick response time of her defenses was a punch to his gut, a tragic reminder of how much she’d been through, how hard she’d had to fight to not let it all destroy her.
“Look Brian, if you don't want to, you can just tell me you know.  I just thought we had something and we could have a great night exploring it.  But hey, I’m a big girl; you don't have to make excuses to let me down easy...”
He gave her a look that said he wondered about her IQ before grabbing her hand and dragging it over the zipper of his jeans.  “Does that feel like I don't want to?”
Her eyes widened, and her grip closed tight around him.
Bourbon soaked shards of glass went hissing down his throat.  “For chrissakes, stop.”  The blood supply in his brain was dipping down to a dangerous low.
And the damn temptress was clearly all torn up about it.  He glared at the smile she was biting back.  “I’m glad you find this so amusing.”
“It’s not amusement, it’s relief.  Here I was thinking it was just me getting affected with my perpetually wet panties around you and all.”
A seriously pained groan escaped him then.  “To preserve my sanity—and your panties—don’t use the word wet in any more sentences tonight.”
She sighed.  “I really don't know why you're making such a big deal out of this.  It’s just sex.  I’m not looking for anything serious.  You heard Gavin earlier this evening.  Being the ‘good girl’ was never exactly my thing.”  She brushed up against the hardening ridge tenting his jeans to drive home her point.
With a muttered curse, he clamped one arm around her waist and tangled his free hand in her hair.  “Sweetheart, this thing between us is a big deal,” he said roughly, tugging gently on her hair and nearly losing it when she arched her back in response.  Her fitted tee was so paper-frickin’-thin.  One sharp yank was all it’d take to rip it right down the middle.
Jesus Christ, he needed to find some control.
“Whether this thing between us lasts one night or ten, when, and yes I said when we have sex, I’ll make damn sure that every single second of it seeps into your bones, burns into your memory, and turns into a relentless craving that makes you forget all the assholes from your past.”  He ran his lips along the thrumming pulse at her throat.
“And if I’m really lucky, it’ll also help ruin you for all other men completely.” 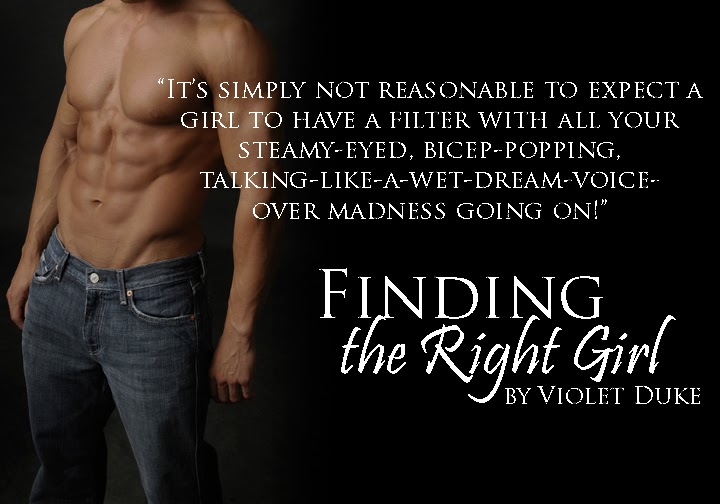 My Review: 4 1/2 stars
This was such a good book. The characters were just so endearing, funny, and quirky, so easy to like and care for. I really liked Tessa, that girl was amazing. She had been through so much and was still such a carefree, loving person who gave 110% to everything she did. Brian, in my opinion is perfect for her. Brian has also had his share of difficulties in his life, but still had room in his heart for love. Not just anyone, but someone like Tessa, who just didn't expect anyone to genuinely care for her. I'm so glad that they did find their way to each other, and a way through all the difficulties yet facing them. I've never read any of Violet's books before, so I don't know Brian's backstory other than what was in this book. Her other books are definitely on my to read list.

New York Times & USA Today bestselling author Violet Duke is a former professor of English Education who is ecstatic to now be on the other side of the page writing wickedly fun contemporary romance novels. When she's not arguing with her story characters or feeding her book-a-day reading addiction, she enjoys tackling reno projects with her power tools while trying pretty much anything without reading the directions first and cooking 'special edition' dishes that laugh in the face of recipes. Violet lives in Hawai'i with her two cute kids and similarly adorable husband. 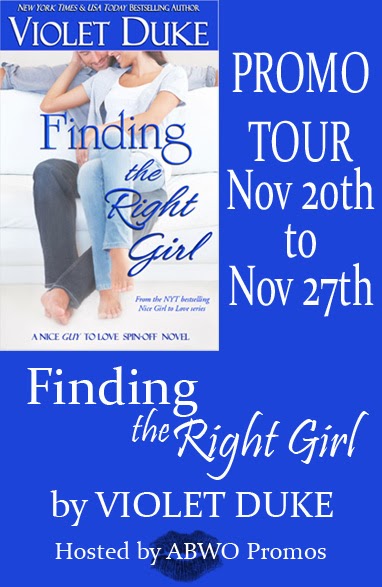