The Dark Huntsman, Tales of The Black Court Book One by Jessica Aspen with Excerpt & Review 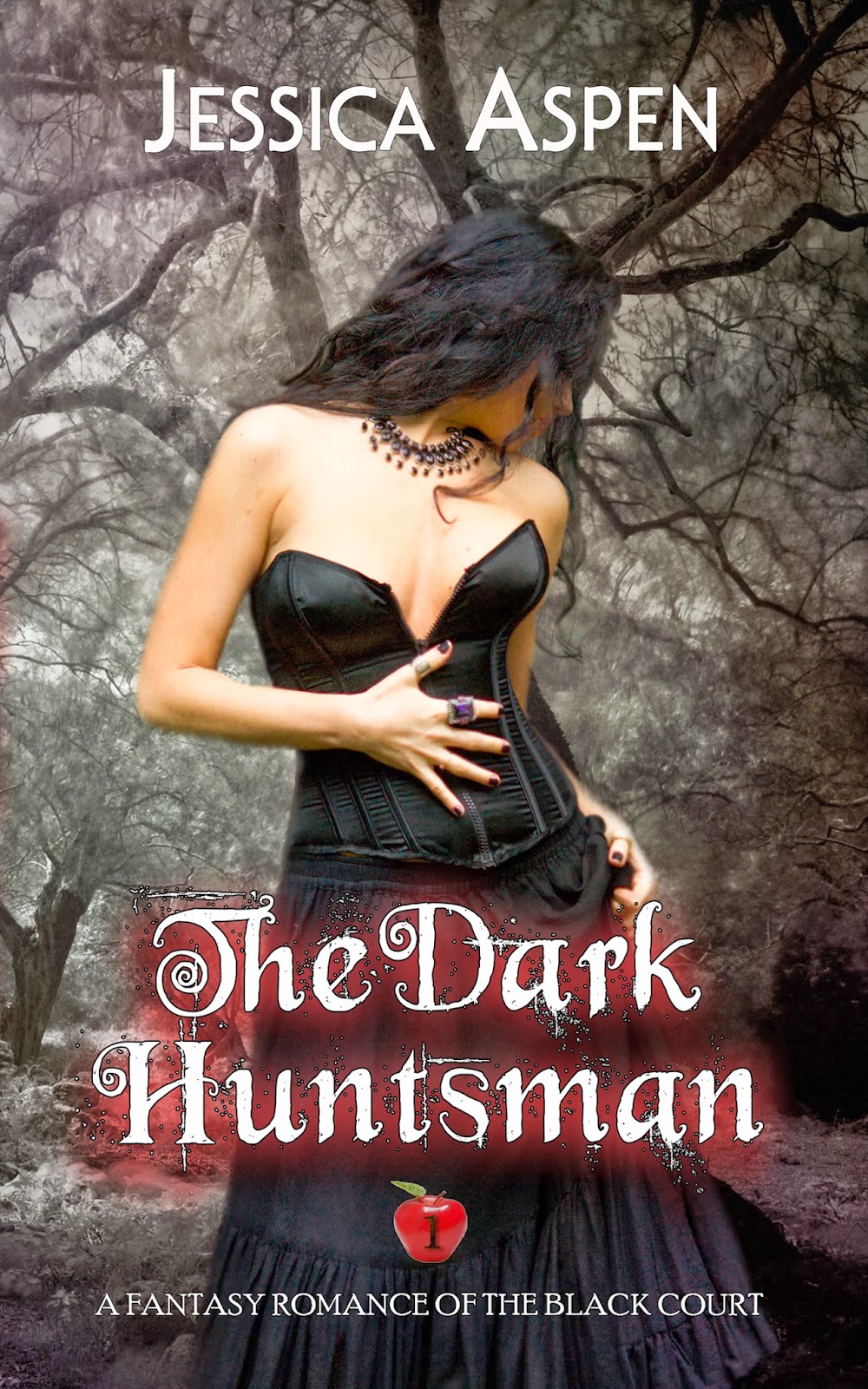 An evil queen, a dangerous man, and a witch, tangled together in a tale of Snow White...

Desperate to save the last of her family from the murderous Faery Queen, Trina Mac Elvy weaves a spell of entrapment. But instead of a common soldier, the queen has released the Dark Huntsman, a full blooded fae with lethal powers.

Caged for treason, Logan Ni Brennan, is ready to do anything to win free of the manipulative queen, even if it includes running a last errand for her…murdering a witch. The sight of Trina, ready to fight despite the odds, gives him another option: use the witch as a chess piece, put the queen’s son on the throne, and bring down the queen forever.

As the queen slides into insanity and her closest advisor makes plans to succeed to the throne, Logan secrets Trina away in the enchanted forest and makes a decisive move in his dangerous game of manipulation. But the gaming tables of fate turn on him, and when Trina’s life is threatened he discovers he risks more than his freedom…he risks his heart.

Purchase it at Amazon

Excerpt:
Riding into the dry-as-bones mountains on the back of the puca, Logan’s anger seared bitter in his chest. It rolled off him in waves, pulling thunder down from the sky. He toyed idly with the storm letting his anger draw the danger of the lightening to him as he seethed. Fifteen years away from his hounds. Fifteen years of Solanum’s running wild, the puca causing havoc wherever he went. Fifteen years of Logan’s life eaten away in the hole of the queen’s dungeons.
And now he was to kill witches for the queen. A fact that rubbed him raw.
Humans were amusing companions, why create trouble? Irritated with the brief flare of morality, he smothered it with brutal force. It didn’t fucking matter what he wanted. It never had.
Lightening cracked. The eerie silent hounds of the Dark Hunt tightened around him, their tense glances and snapping teeth reflections of his flaring emotions.
He had no room for second thoughts tonight. The Black Queen had given him no reason why she needed these witches killed, but if he satisfied her it might give him his freedom. At the very least it would give him some space. Maybe some time to figure out a way to stay out of the dungeons. And time to figure out how to truly extricate himself from her bloody dominion.
Because no matter what she had promised him, he knew, there was no way she would simply let him go. Not after the way he had betrayed her.
Solanum tossed his head and bucked. “Quit squeezing my ribs.” Lurid green faery flames leapt from his hooves, igniting short-lived cold fires in the dry Wyoming brush.
“Cease, horse,” Logan said, squeezing his legs a little more. Punching Solanum’s buttons felt good, really good. Just like his wrath at the queen felt good. Justified.
The puca tossed his long mane into Logan’s eyes. “Lay off, or you’ll be eating dirt,” the puca snarled, his nostrils flaring in the dimming light.
Solanum’s irritation put a hard smile on Logan’s lips. He tightened his legs and drove the puca harder down the hill through the brewing storm.
A hound pushed in close. Solanum’s hoof lashed out, connecting with a solid thud. The hound’s yipe sounded inside Logan’s head as he regained his balance, cursing the hound’s behavior and the puca’s intolerance.
He was back. The hounds would get used to him again. And Solanum too.
Thunder crashed in the sky, following him down into the shadowed hills as he approached the witches’ lair. Nostrils burning from the ozone, nerves tingling, he distracted himself with the dark moist wind, manipulating it to blow through the dry autumn brush like a child's tantrum.
He laughed, the spiteful wind stealing away the dark sound as cracks of thunder echoed off the mountains. He let the anger simmer and the lightening moved further away. He wasn’t free yet, and he wasn’t suicidal. What he was, was trapped. And it pissed him off, the frustration riding him like a hag.
What could he do when the queen changed her mind and refused to release him from her service? What if the bitch thought she could use him then put him back into her dungeons Underhill, calling him to her side like a lapdog? He needed a way to show her there would be repercussions. He needed leverage.
In the distance, thunder rumbled and they tipped over the edge of the valley in search of the witch. A wavering glow of candles shone above the last few rocks.
Almost there.
The telltale traces of a spell raised the hair on the back of his neck. He extended his Gift to perceive what he couldn’t yet see. A labyrinth set by a single inexperienced witch. His lips twitched. As protection it might have worked, had the Faery Queen sent her regular henchman. Unluckily for the witch, the queen had unleashed him. The Dark Huntsman.
He would kill the wench, and be done with this thing between himself and the queen of the Tuatha De Dannan. And when the queen refused to release him? He’d deal with that when the time came.
The wind carried the hot dry smell of sage mixed with the smell of fear and musky female. He inhaled the raw flavor of the witch, the taste of her fear and anger and power slid down his throat, easing his rage.
The anxious hounds shifted around him, sensing the proximity of their prey. Solanum rounded the rock.
And there she was.
The sight of her rocked him back like a blow, almost knocking him to the ground. And he realized that despite the stasis, fifteen years had been too long a time to be without a woman.
Glimmers of power limned her naked body and the silver blade of the athame that gleamed between her breasts. Her legs were spread slightly apart, tensed for battle. Long black hair crackled and lifted with static. Her expressive face was poised on the edge of dilemma, her body caught between the need to hold the spell and the need for action.
He paused to let the feel of power and woman roll through him.
Beautiful.
Unexpected.
Green, almond shaped eyes widened. Her stance firmed, her shoulders pulled back, and her full breasts rose, nipples tightened with cold or fear. Something wild and raw he hadn’t felt in a hundred years stabbed low in his gut.
His agenda changed.
The queen wanted to kill the witch. Why? His plan of placating the queen suddenly seemed weak. She’d never let him go without leverage, and here was leverage standing naked and lovely before him. He had a new plan.
Screw the queen.

My Review: 5 stars
What an excellent introduction to this series. I love the twisted fairy tale version that Jessica has written, not to mention the erotic aspect that she's brought to the tale. It was creative to make the Huntsman the hero instead of bringing in a Prince. The Huntsman is the one who is already involved in the story by hiding the person the Queen wants dead, makes perfect sense. Although in this case, it's not a princess, but a witch that the Queen wants dead. Rather, an entire clan of witches, yet the Huntsman only finds one: Trina. Initially, Logan, the Huntsman, plans on using Trina to get what he wants. But the best laid plans swiftly fall away when the heart decides to become involved. Trina is angry at Logan, yet she finds herself very attracted to him. She tells herself it's because of his fae magic, but it's really not. This was really a great story to read and I truly loved all the different, slightly twisted aspects of the story that Jessica changed and wove into her tale. I'm looking forward to reading the rest of the series to find out which tales she chooses, and what the prophecy brings forth. 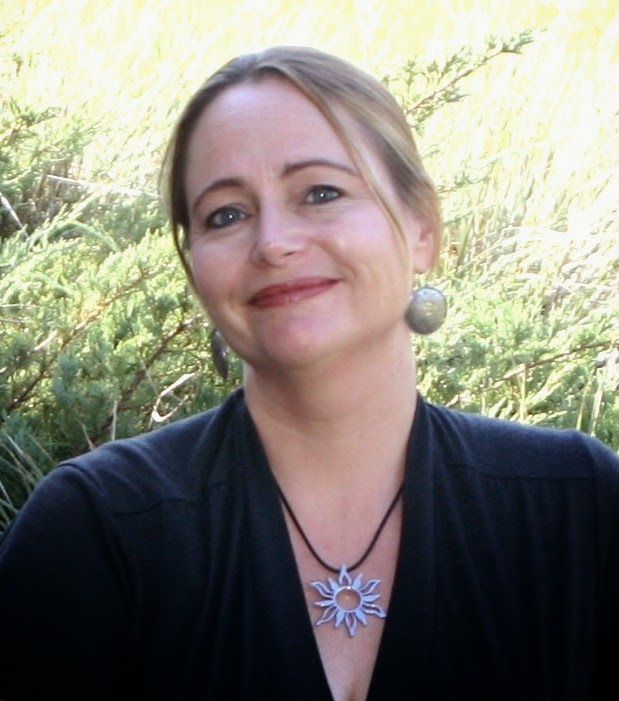 Jessica Aspen has always wanted to be spirited away to a world inhabited by elves, were-wolves and sexy men who walk on the dark side of the knife. Luckily, she’s able to explore her fantasy side and delve into new worlds by writing paranormal romance. She loves indulging in dark chocolate, reading eclectic novels, and dreaming of ocean vacations, but instead spends most of her time, writing, walking the dog, and hiking in the Colorado Rockies.

Join the Jessica Aspen mailing list! Get the scoop on new releases, sales, plus the chance to win ARCs and participate in special giveaways.  http://eepurl.com/zs4Sj 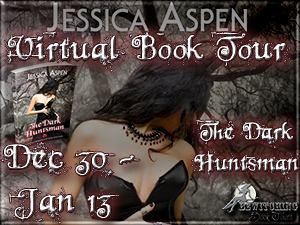