Nothing Personal by Rosalind James with Excerpt & Review 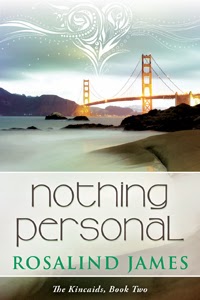 Contemporary Romance
Date Published: 10/18/2013
The Kincaids Book #2
By the author of the bestselling Escape to New Zealand series--

Synopsis:
When you wish upon a star . . .
Alec Kincaid has never met the obstacle he couldn’t overcome—or the woman who could resist him. And it’s not going to happen now, not with his star shining more brightly than ever in the high-stakes arena of San Francisco’s software industry.
Desiree Harlin doesn’t believe in fairy tales, and she doesn’t waste time wishing. She’s learned the hard way that dreams don’t come true. And with her reputation and hard-won security on the line, succumbing to temptation isn’t an option.
But things aren’t always what they seem. And even stars sometimes fall.

Excerpt:
She’d spooned up every bit of the rich broth, the chunks of beef and vegetables, had dipped a second and then a third piece of bread in olive oil. Alec had watched it all without comment, while dispatching his own dinner with an alacrity that confirmed to Desiree that he really hadn’t had dinner yet tonight.

And when they’d finished, he’d insisted, together with Giuseppe—of course the waiter’s name was Giuseppe, because this wasn’t romantic enough, the white tablecloth and the single red rose and the candle and the worn brick against her shoulder—he’d insisted that she order cannoli for dessert.

“Just one,” he coaxed. “If you don’t want it, you don’t have to eat a single bite. But I think you need to taste whipped cream tonight.”

“Don’t you think she needs some whipped cream?” he demanded of the waiter, who smiled back at him, sensing, Desiree thought through a satisfied haze of red wine, succulent beef, and way too much potent testosterone, a truly magnificent tip.

“Definitely, the signorina needs whipped cream,” Giuseppe agreed. “And we have the best.”

She wasn’t sure how you had better whipped cream than anyone else, but when the dessert arrived, she had to concede that this was the best.

Amaretto, one still-sane corner of her practical brain suggested, but that sensible voice was drowned out, oh so rapidly, by the sensation on her tongue, the silky smoothness of cream, the almond sweetness of the liqueur, the delicate drift of pastry and the deep dark pleasure of chocolate. And Alec, watching her as she allowed the rich concoction to drift between her lips, over her tongue, down her throat. Watching her, enjoying the sight of her enjoying herself, as if it were his tongue. His throat.

By the time he’d slapped a hand against the door of the cab that had again been waiting when they’d stepped out of the restaurant’s front door, leaped back onto the sidewalk and raised that same hand in farewell, she’d been so lost in fatigue, wine, and lust that she could only sit back against the scarred leather and thank heaven that she hadn’t actually kissed him. Or begged him.

My Review: 4 stars
This was an interesting book to read. Far more complex than it initially seems. There's the sexy alpha male, Alec, who can have anyone he wants - except Desiree (Rae). Then there's the whole corporate espionage that's going on which gets a little tricky. I really liked Rae, she was upfront and so matter of fact with certain things. But that's how it is when you have to work harder to get what you want. You learn to put up with things to get what you really want. Alec comes from the same background, although he's already made a few millions, has lead a life of some decadence, but he's looking for something new and that something new is Rae. From the moment he meets her again he wants her, but she makes it clear that nothing is going to happen.
I didn't read the first book, so I'm a little lost when those references come into this book, but I did get the jist that the first book was about Alec's twin, Gabe, and the experiences that led him to his fiance, Mira. Since that time, it seems that Alec is looking for something more out of life than casual hookups. Along comes Rae, and when he remembers her, it really stuns them both. They grew up in the same place. Rae's not used to people even looking twice at her. She's there for business and nothing more. Somehow Alec and Rae get under each other's skin, although I've got to admit that reading about him being uncomfortable because he wasn't getting anywhere with Rae was kind of awesome. I totally loved how Alec told Rae that he wanted romance. Guys just don't do that. I really liked that he was there for her when it counted and made sure that he kept being there, because that's where he wanted to be. I loved how Alec and Rae worked together to find out what was happening with the company they were trying to build. I really liked the end, that was original. And I totally loved this book. It left me with a good, happy feeling; that's hard to do. 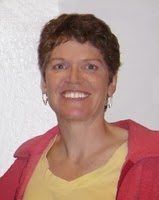 Rosalind James is the author of the Kindle-bestselling "Escape to New Zealand" series (currently five titles strong), as well as the new U.S.-based "Kincaids" series. Her first book,"Just This Once," has sold tens of thousands of copies in the year since it was published, eventually reaching #85 in the Amazon store. A marketing professional and publishing industry veteran, Rosalind has lived all over the United States and in a number of other countries, traveling with her civil engineer husband. Most recently, she spent several years in Australia and New Zealand, where she fell in love with the people, the landscape, and the culture of both countries. She loves trying new things in her writing, most recently the mystery and suspense in "Nothing Personal."
Rosalind credits her rapid success to the fact that “lots of people would like to escape to New Zealand! I know I did!”