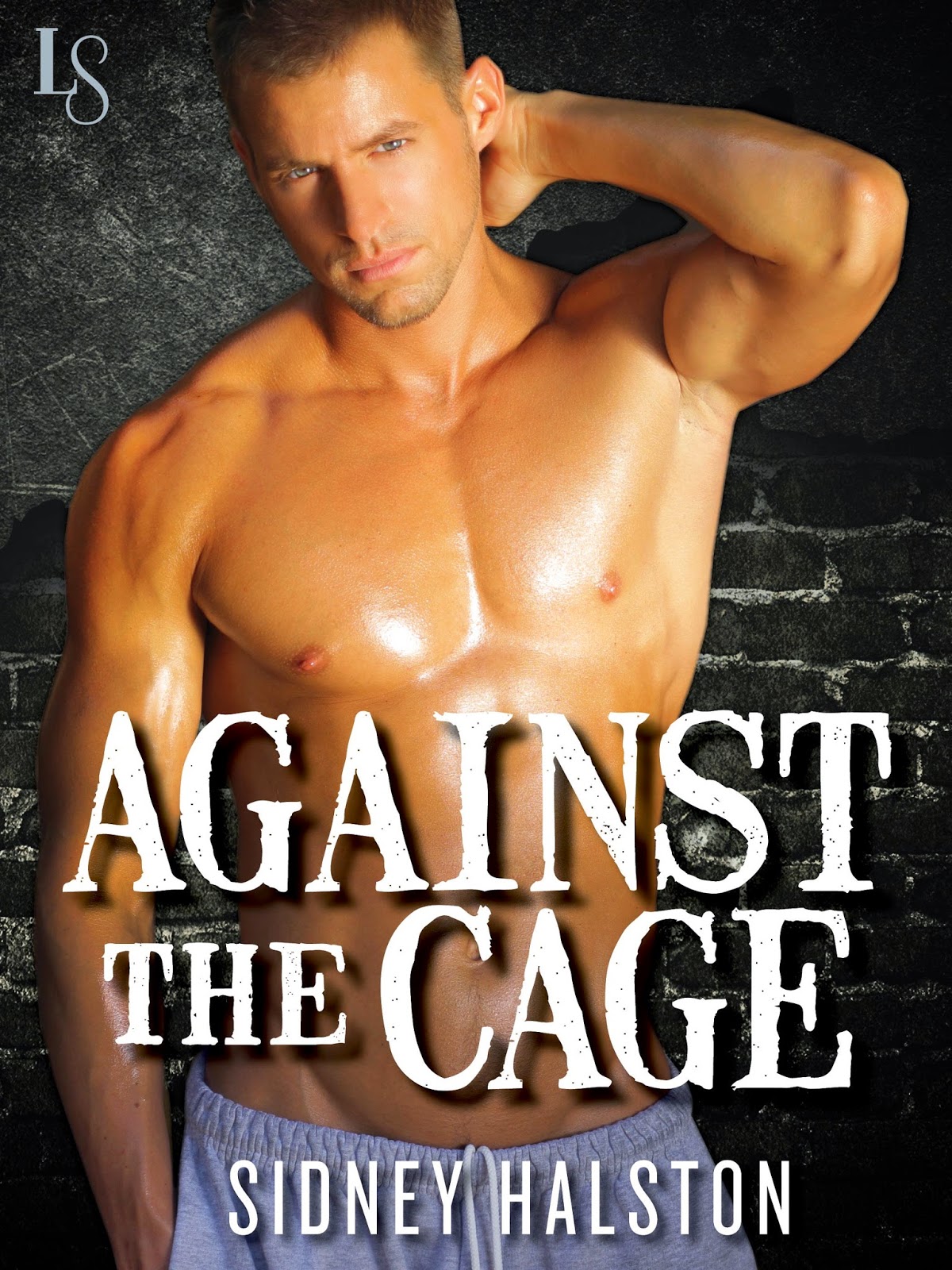 AGAINST THE CAGE: Worth the Fight Series
Loveswept Contemporary Romance
Written by Sidney Halston
Releasing May 27, 2014

Blurb
In her Loveswept debut, Sidney Halston turns up the heat as a sexy cage fighter shows a former bookworm how delicious a few rounds between the sheets can be.

For Chrissy Martin, returning to her Florida hometown always seems to bring bad luck. The day starts with a breakup text, followed by a jailhouse phone call from her troublemaker brother. Now a routine traffic stop has ended with her accidentally punching an officer . . . in a delicate place. Then Chrissy realizes that the hot cop on the receiving end of her right hook is none other than the man from her teenage fantasies.

Jack Daniels knows how to take a hit. After all, when he’s not chasing reckless drivers, he’s kicking ass in a mixed martial arts ring. So what takes his breath away isn’t the low blow, but the woman who dealt it: a gorgeous knockout with legs Jack wouldn’t mind being pinned under—who just so happens to be his best friend’s nerdy little sister, all grown up. Soon their instant chemistry leads to a sizzling affair, but Jack and Chrissy are fighting an uphill battle if they want to make love last beyond the final bell.

Excerpt:
“I hope I didn’t take too lo--” Jack strode into the living room to see a tiny sleeping ball on his couch. She looked so small on his big fluffy white sofa. It was quite the contrast; her long straight pitch-black hair and black dress against the white of the couch. Her alabaster legs were tucked under her, her head rested on the arm of the couch, and her dress had unceremoniously inched up her thighs. Drogo sat on the floor, inches from Chrissy’s face, staring. It was odd. He normally went in for the kill. Okay, maybe not a kill since his teeth were tiny, but he definitely tended to bite. Instead, he just sat on his hind legs staring at her. Not exactly a friendly stare-down but not menacing either. People never believed Jack about the pit bull blood that ran through Drogo’s veins, but it was true. What kind of man would have a girly little Chihuahua? Not a real man, and Jack was a real man. His dog had spirit and that spirit didn’t match its size. And when the dog bit, his jaw locked and didn’t let go. Pit bull for sure. Real men had pit bulls.
He looked over at his dining table to see that she had set the sandwich and a beer on a place mat she must have found in one of the drawers. It felt nice to have someone at his home, taking care of him. Not wanting to wake her, he grabbed a small blanket he kept by the television and went to drape it over her, but Drogo ran towards the blanket, bit down, and pulled on the corner. Jack pulled harder but the feisty dog wasn’t letting go. He yanked the blanket up but the dog held on, dangling a foot off the floor. Damn dog! A year later and the dog still hated people—Jack included.
After a somewhat long battle of tug of war, Drogo finally admitted defeat and released his death grip on the blanket, scampering back to his corner—most likely to plot revenge. The pup kept his eyes on Jack, showing off all of his little razor sharp teeth, clearly meant to intimidate. If the dog could speak he’d say: You win this battle, Daniels. But it’s on, now! Jack softly draped the cover over Chrissy. He then went to the table and tried not to think about the woman that was sleeping on his couch. When he was finished, he put the plate in the dishwasher, grabbed the box of keys and headed out towards her house. And of course, the last key he tried, after trying all three zillion keys, was the one that unlocked her door. “Yes!” he said out loud, to no one.
Jack crossed the lawn back to his house where he was greeted by a squeaky growl from Drogo. Jack rolled his eyes. He didn’t want to disturb Chrissy but he felt bad leaving her to sleep on the couch all night. He crouched down with the intention of waking her but just as he was about to gently tap her shoulder, he found himself pausing to admire her for a few moments. Asleep, there were no signs of the feisty attitude he’d witnessed earlier. She looked like an angel, even with her black-rimmed glasses partially crooked from being pushed against her hands. He reached under her with both arms and lifted, effortlessly. Drogo eyed him cautiously but didn’t bother moving. As if by instinct, she snuggled closer to him and he could smell her soapy scent. He started walking towards the door but apparently the movement startled her and she jerked, causing her to fall right out of his arms.
Hastily, Jack reached down and pulled her up to her feet, their bodies brushing against each other on the way up, her hand lingering on his forearm. “Shit. You okay?” he asked.
“Y-yeah.” She pulled her hand away as if she’d been electrocuted, straightened her skirt and leaned back against the wall to put some distance between them. She looked at him as if she was prey and Jack was the big bad lion. There was a sudden electrical spark between them and it took him about a year to move his attention from her legs, over her body, all the way up to her big blue eyes.
“Wh-hat were you doing?” Her eyes were wide and her lips parted. Her chest moved in and out, causing his eyes to want to dart down to the swells of her breasts, but he kept it controlled and arduously maintained eye contact.
“Sorry, Chrissy. You looked so peaceful I didn’t want to wake you. I was going to carry you home. I found the key and was able to unlock the door while you were sleeping. God, you smell good.” He hovered inches from her face, both his palms flat against the wall on either side of her head. She was caged in. His head moved down to her neck and she felt him breathing in her scent.
“Oh. I guess I was tired. I must have dozed off. Did you eat?” She was talking a mile a minute.
“Yeah. Thanks, it was delicious.” His thumbs, having a mind of their own, reached towards her face and caressed her cheeks. Drogo growled and Jack hushed him. He noticed her eyes glossing over as her eyes never left his, and her tongue darted out to moisten her lips. The sight of her pink tongue sent him over the edge.
“And, wh-what are y-you doing now?”
“I’m getting ready to kiss you.” His voice was husky and low.
“Oh.” She licked her bottom lip and whispered. “Is that a good idea Ja--”


He placed his index finger on her mouth to quiet her. “I think it’s the best idea I’ve ever had.”

This is the first book that I've had the pleasure of reading by Sidney, but it damn sure won't be the last. This book has it all; action, a little bit of drama, loss, heart break, healing, love, hot guys fighting - what's not to like? I loved the sense of humor that Sidney also brought to her characters, the depth to which they showed they cared about the other was fantastic also. I was cracking up so hard the first chapter, and from there I really couldn't put the book down.
Chrissy, Jack and Slade grew up together. Jack and Slade were best friends and Chrissy, Slade's little sister, always tried to tag along. That didn't really work out so well for her.
Now she's back in town to try and clean up after her brother again, because it seems he doesn't really care about much in general. Things between Jack and Chrissy heat up, and despite Chrissy's telling herself she's not going to go there, she really can't help herself.
Jack is everything she's wanted since she was young, but she's afraid. Chrissy is also keeping some things to herself, that she thought her brother held against her. When she finally tells Jack, he tells her she's wrong. Jack moves Chrissy into his house while she's staying and things just get more and more intense between them. Lots of things happen, both for Chrissy and Jack, and Chrissy thinks that by leaving, she'll just get over it. When she realizes she won't, she tries to go back, but fate has other ideas.
Jack and Slade both are going crazy wondering where Chrissy went. Jack is called to work, and when he finds out why, his worry for Chrissy just increases. Because she's just gone and no one has heard from her. When Jack tells Slade what he had said and did all those years ago, Slade can't believe that he would have done what he did, but he did. Then when Jack finds Chrissy's car, but not Chrissy, is when both Slade and Jack realize they both could lose her, and not for just a few years.
I absolutely loved the way the book ended, Jack and Chrissy were very good together. Each strong enough for the other, and that's important. I'm looking very much forward to the next book coming out whenever that may be. Sidney did a fantastic job with the story line and the characters. I really enjoyed reading every bit of this.

Author Info
Sidney Halston lives her life by one simple rule: “The secret of getting ahead is getting started” (Mark Twain). Or even simpler: “Just do it” (Nike). And that’s exactly what she did. At the age of thirty, having never written anything other than a legal brief, she picked up a pen for the first time to pursue her dream of becoming an author. That first stroke sealed the deal, and she fell in love with writing. Halston lives in South Florida with her husband and children.