Synopsis
How long can you keep a secret from the one you love? How can you possibly say the words that will rip both your worlds apart?

Finally able to face her fears of abandonment, Olivia Adler begins to prepare for the next phase of her life. But Alexander Burnham is still holding on to all the secrets about Olivia’s past, trying to protect her. As days go by, Olivia is slowly starting to remember her past and Alexander realizes it’s only a matter of time until she puts all the pieces together and figures out who he is…

But if she remembers, her life could be in even more danger than it already is. And Alexander cannot have that happen. When shadows of Olivia’s past threaten not only her life, but also those around her, will Alexander finally put Olivia’s needs ahead of his? Will she be able to put all the pieces of her past together in order to save her own life and those she’s close to? Can she figure out who she can trust and who is threatening her very existence? Gorgeous Chaos is the explosive conclusion to T.K. Leigh’s Beautiful Mess series.

RECOMMENDED FOR AGES 18 AND UP DUE TO EXPLICIT SEXUAL SITUATIONS, STRONG LANGUAGE, AND GRAPHIC VIOLENCE. 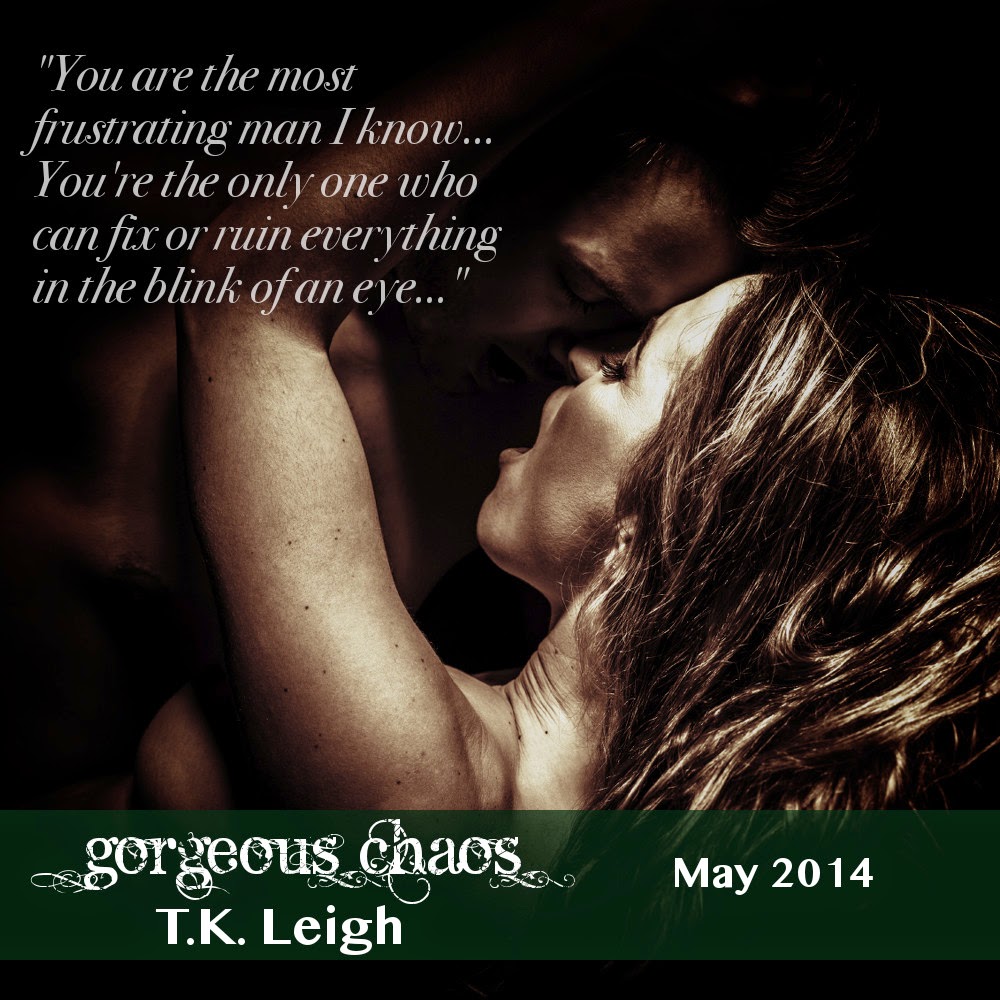 Excerpt:
Olivia leaned down, not wanting to look into those same green eyes she always saw in her dream, and kissed Alexander deep on the mouth, their tongues entwining softly at first. Her kiss became more needy, her hips beginning a more torturous rhythm. She needed to forget it all, and Alexander was the only one who could help her.

“Damn, baby,” he breathed, flipping her onto her back. “What’s gotten into you this morning?” He admired the beautiful woman panting below him. “Do you want me inside of you?” he asked, his eyes narrowed.

She nodded her head, bringing her hips up, pleading with her body for Alexander’s touch.

“Oh no, Olivia,” he said coyly, shaking his head. “I need to hear you say it.” He gently trailed kisses down her neckline, taking his time so he could savor each intoxicating minute. “I love the taste of your skin,” he whispered in her ear.

His voice sent electric currents through her veins, igniting her body with passion. Olivia wondered if she would always have that reaction to him. She hoped so.

Pulling back, he returned his intense green eyes to hers. An evil grin spread across his face as he teased her, pressing his pelvis rhythmically between her legs.

“Alex, please. I need to feel you.” She reached up and forced his mouth against hers, kissing him full on the lips, telling him with her tongue how desperately she wanted him.

He groaned and Olivia felt him harden even more against her, surprised that was possible. He positioned himself between her legs and traced circles with his tongue on her nipple. “Say it, love.” He teased her clit with his erection, nibbling on her ear. “Tell me you want me inside you, Olivia,” he whispered, his voice husky. “That you want to feel me slowly moving inside you over and over again, pushing you higher and higher with each motion until you can’t think from the amazing sensations you feel from my love.”

“Alexander,” Olivia exhaled, her breathing ragged from his words alone. “I want you inside me,” she panted, running her fingers through his dark hair. “I want you to make love to me.”

Alexander crushed his lips to hers, his hands traveling up and down her naked body before he pulled back and gazed into her eyes. “Do you have any idea how much I love you?” he asked sweetly.

She nodded, biting her bottom lip as she stared at his chiseled body moving slowly on top of her. He wasn’t even inside her yet, but she was ready to explode from the love she felt for him at that moment. Grabbing his head, she brought his mouth just a mere breath from hers. “I love you, Alexander Burnham. Forever. You’re the only man for me,” she whispered sweetly against his lips as he slowly entered her, her eyes growing wide from the total euphoria enveloping her body. It was the same feeling she felt every time she was with him, and she never wanted it to stop.

My Review: 4 1/2 stars
Finally! The conclusion to all those questions running around in my head since I finished A Tragic Mess (Book 2). If this is the book you're starting with, stop now. Read the first two books, then read this one. You really need to in order to understand everything that Alex and Olivia have been through, not only together, but separately as well.
This book begins where the last left off, with Alex and Olivia engaged. It seems they will have their Happy Ever After, but there is still a secret that Alex is keeping from Olivia. That secret can destroy everything. When Olivia begins remembering on her own, things about her past. That puts her in danger, because she knows things others don't want her to remember. Alex really goes above and beyond to protect Olivia, not to keep the secret from her, but because he truly does love her with all that he has and everything he will be. Alex and Olivia are truly meant to be together - no matter what.
This book encompassed so many emotions it was an up and down journey that left you breathless one moment, and broken down crying the next, there were twists that were so unexpected and turns that left you wondering what was coming next. Alex and Olivia had fantastic chemistry together, and you could feel that coming from the pages. Their love was white hot with it's intensity, and also smouldering with the passion they felt for the other. What a way to end this series. T.K. has done an amazing job with this series, and I can't wait to see what she has in store for us next.

T.K. Leigh, otherwise known as Tracy Leigh Kellam, is a producer / attorney by trade. Originally from New England, she now resides in sunny Southern California with her husband, dog and three cats, all of which she has rescued (including the husband).

Her debut novel “A Beautiful Mess” has garnered relative praise, having been an Amazon Best Seller, as well a Number 1 Best Seller in Romantic Suspense, Women’s Action and Adventure Fiction, Women’s Crime Fiction, and Women’s Psychological Fiction. Recently, the book was named by The Guardian as a top reader-recommended self-published book of 2013 as well as a 2013 Reader’s Favorite in Publisher’s Weekly in addition to being named an Amazon Romance Editor’s Fan Favorite for Top Debut Author and Best Page Turner.

The sequel to “A Beautiful Mess”, entitled “A Tragic Wreck”, became an Amazon Top-50 Best Selling Book on the day of its release. It is also an Amazon Number 1 Best Seller in Women’s Sagas, Women’s Psychological Fiction, Women’s Action and Adventure Fiction, and Women’s Crime Fiction.

When she’s not planted in front of her computer, writing away, she can be found running and training for her next marathon (of which she has run over fifteen fulls and far too many halfs to recall). Unlike Olivia, the main character in her Beautiful Mess series, she has yet to qualify for the Boston Marathon. Purchase Her Other Books Today

Giveaway
Kindle Paperwhite (US Only), $100 Victoria's Secret Gift Card, (3) A complete set of signed paperbacks of the entire Beautiful Mess series and (5) Choice of signed Paperback of any of T.K. Leighs' books
a Rafflecopter giveaway