Queen of Swords (A Sactify Novel) by Katee Robert with Giveaway, Excerpt & Review 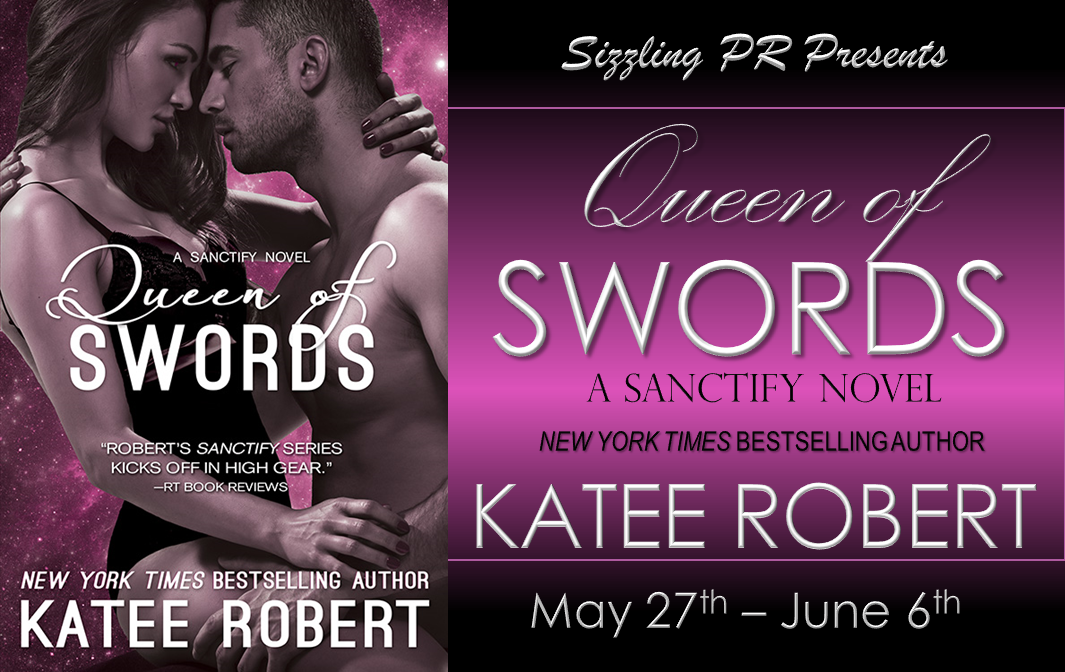 Queen of Swords
by: Katee Robert 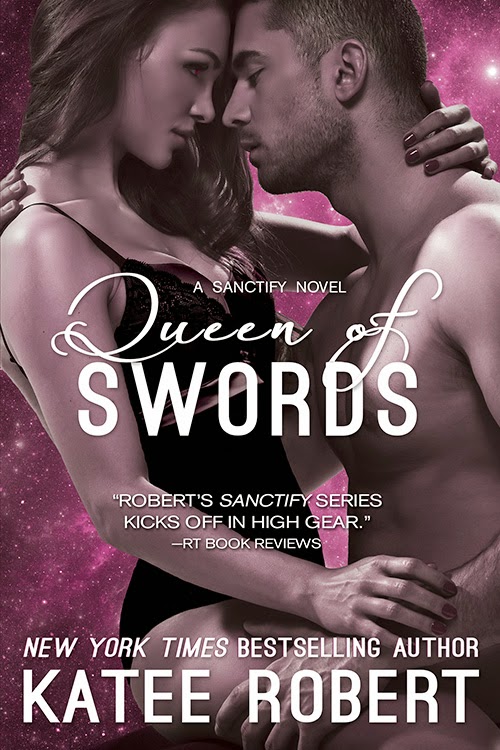 Synopsis:
When the cards tell Ophelia Leoni she's supposed to marry the Prince of Hansarda, the gunrunner grits her teeth and boards the starship that comes for her. It doesn't matter if the ship's commander is the gorgeous stranger she just spent a wild, drunken night with. As a Diviner, she’s painfully aware the cards don't lie. Ever.

Boone O’Keirna knows Ophelia is trouble the second he sees the way she moves. Not about to let the little hellcat marry his sadistic half-brother, Boone pretends to be the Prince’s emissary and kidnaps Ophelia. Too bad they can’t be in the same room without him wanting to throw her out an airlock–or into bed.
Even as they fight each other–and their explosive attraction–Ophelia and Boone sense something is wrong. Too much is going their way. Soon, they realize while the cards may never lie, the truth is sometimes hidden between them...and the future king of Hansarda is not one to take defeat lying down.

When she was close enough, Ophelia sprang, jumping on the man, her stolen knife resting against his throat. He gave a grunt of surprise and then she was on her back with her arms pinned above her head, a very familiar body on top of her.

“What are you doing?” Boone growled. “I already told you I’d take you home.”

Ophelia was still trying to process how she’d gotten on the floor in the first place. She wondered what she’d have to do to get him to teach her that move. “I thought you were an intruder.”

“Yeah, well, I know that now.” It was too weird, laying here naked with him on top of her, having a relatively normal conversation. “You can get off me now.”

“Oh.” Why did she always seem to lose her words around him? This was getting pathetic. But, if she were going to be perfectly honest, she was comfortable too. Boone’s grip loosened, his thumbs playing along the inside of her wrists. She tried and failed to hold back a shiver. “Stop that.”

That wasn’t the problem and he knew it. “You’re sending me home.” Had she just said that out loud? Damn.

She couldn’t see his face in the darkness, but his breath ghosted across her lips. Close, very close. “This isn’t smart.”

He shifted and then his tongue traced along the shell of her ear, making her eyes cross. “You don’t even like me.”

“Only most of the time.”

That surprised a laugh out of her. Then his lips were on hers and there were no more words. She wanted to give herself up to the kiss, to lose herself in him, but Boone kept it light, nipping along her bottom lip before he finally took it to the depth she wanted. He kissed like he wanted to memorize her taste, but Ophelia was so busy giving him the same treatment, she didn’t have time to think about it. And, Lady, but he tasted amazing. Ophelia arched her back, rubbing against him. She pulled back long enough to say, “You’re wearing too many clothes.”

Boone laughed and then they were kissing again, one of his hands keeping hold of her wrists while the other moved down her arm, raising goose bumps in its wake. She writhed when he bypassed her breast and cupped her hip, his fingers feathering over her skin. “Gods, woman, stop doing that.”

“You first.” Was that her voice, all breathy and low?

Ophelia was drowning in him and she couldn’t bring herself to care. Boone chuckled and she felt it all the way to her toes.

She saw it coming as if from a great distance and could do nothing to stop it. “What?”

What was the deal with the trust questions? People could have sex without trusting each other. They did it all the time. Hells, she and Boone had already done it. And that counted, even if she couldn’t really remember. “Boone.”

His hand drifted up to her ribs, not nearly high enough. “Answer the question.”

My Review: 4 stars
It has been a really long time since I've read a Sci-Fi book. Katee did a very good job of writing the characters and the beginning of this new series. The story line was great, and I enjoyed the love/hate thing that went on between Ophelia and Boone. Made it all the more interesting. They had some definite chemistry. They fought not only with themselves, but with each other over that attraction and sizzling chemistry. There was plenty of action, romance, and a bit of light-hearted fun as well. While I didn't totally love it, it was a good read nonetheless. I liked the ending, and that was good enough for me. I liked the world building that Katee did, and the other non-humans. Very interesting and creative. It took some adjusting for me to get into, because as I said, this is the first Sci-Fi book I've read in a long time. For people who do enjoy Sci-Fi more than I do, I would imagine that this would be more than a good read.

Author Bio:
Katee Robert learned to tell stories at her grandpa's knee. Her favorites then were the rather epic adventures of The Three Bears, but at age twelve she discovered romance novels and never looked back.

Though she dabbled in writing, life got in the way--as it often does--and she spent a few years traveling, living in both Philadelphia and Germany. In between traveling and raising her two wee ones, she had the crazy idea that she'd like to write a book and try to get published.

Her first novel was an epic fantasy that, God willing, will never see the light of day. From there, she dabbled in YA and horror, before finally finding speculative romance. Because, really, who wouldn't want to write entire books about the smoking-hot relationships between two people?

She now spends her time--when not lost in Far Reach worlds--playing imaginary games with her wee ones, writing, ogling men, and planning for the inevitable zombie apocalypse.

Giveaway Info:
50 gift certificate to Amazon, as well as a swag pack.