Daisy “Little Flower” Anderson has lived her entire life on the sidelines of the Renegade Sons MC. Her father is a member, and her mother a club whore turned old lady. Not wanting to follow their footsteps, she chose a different path; one that keeps her close to the biker family she loves, but out of the club. Struggling to keep it together, she never thought she would have anything of her own, until she met Preach. He is everything she swore she didn't want in life. One night of passion leads to unexpected consequences, and she knows, now more than ever, it’s time to move forward.

Garrett “Preach” Austin lived his life caught in his father’s iron fist. He never thought he would want anything more than freedom from his past, until he met his “Little Flower”. She shows him there is more to life than pain. Preach has a secret; one that forces him to choose between Daisy and his brothers. Even though he loves Daisy, the Renegade Sons are the only true family he has. He knows he can’t have her, yet he can’t let her go.

When Daisy moves on, Preach realizes what he’s lost. Can he prove that he’s the man for her, or is he too late?


Excerpt:
Daisy
“Are you okay, girl?”

I look up and see the hottest man I have ever laid eyes on. His eyes, oh my God, they must be the most beautiful eyes that I have ever seen; light brown with shots of gold throughout. They remind me of the Tiger’s Eye necklace my Grams gave me for my sixteenth birthday -- just breathtaking.

He has golden highlights in his coffee colored hair.  It brushes the top of his shoulders, lying haphazardly around his gorgeous face. For some reason, I have the urge to reach up and see if it’s as soft as it looks.

He’s tall, at least six foot, and the top of my head doesn’t even reach his shoulders.  Other than his height, he’s not a big guy.  Instead, he is long and lanky, reminding me of the cowboys in those old black and white western movies that my Grandpa and Uncle Holt used to watch.

Naturally, I notice that he’s wearing a cut just like my dad and his brothers.  He’s a Renegade Son.

I know I’m staring at him, but I can’t stop myself.  I swear, just looking at him takes my breath away and makes my eyes hurt at the same time.  He really is the most gorgeous man I’ve ever seen.   It doesn’t take long for him to notice my reaction, and a slow smile spreads across his face.  “What’s your name, girl?”

“Daisy,” I whisper, feeling a blush spread across my cheeks.

“My name’s Garret Austin, but you can call me Preach,” he says as he climbs onto his bike.
“Climb on. Let’s get you out of here.”


I nod, too tongue-tied to respond.  I slide on behind him and wrap my arms around his waist.  Leaning my chest against his back, I close my eyes and enjoy the ride. 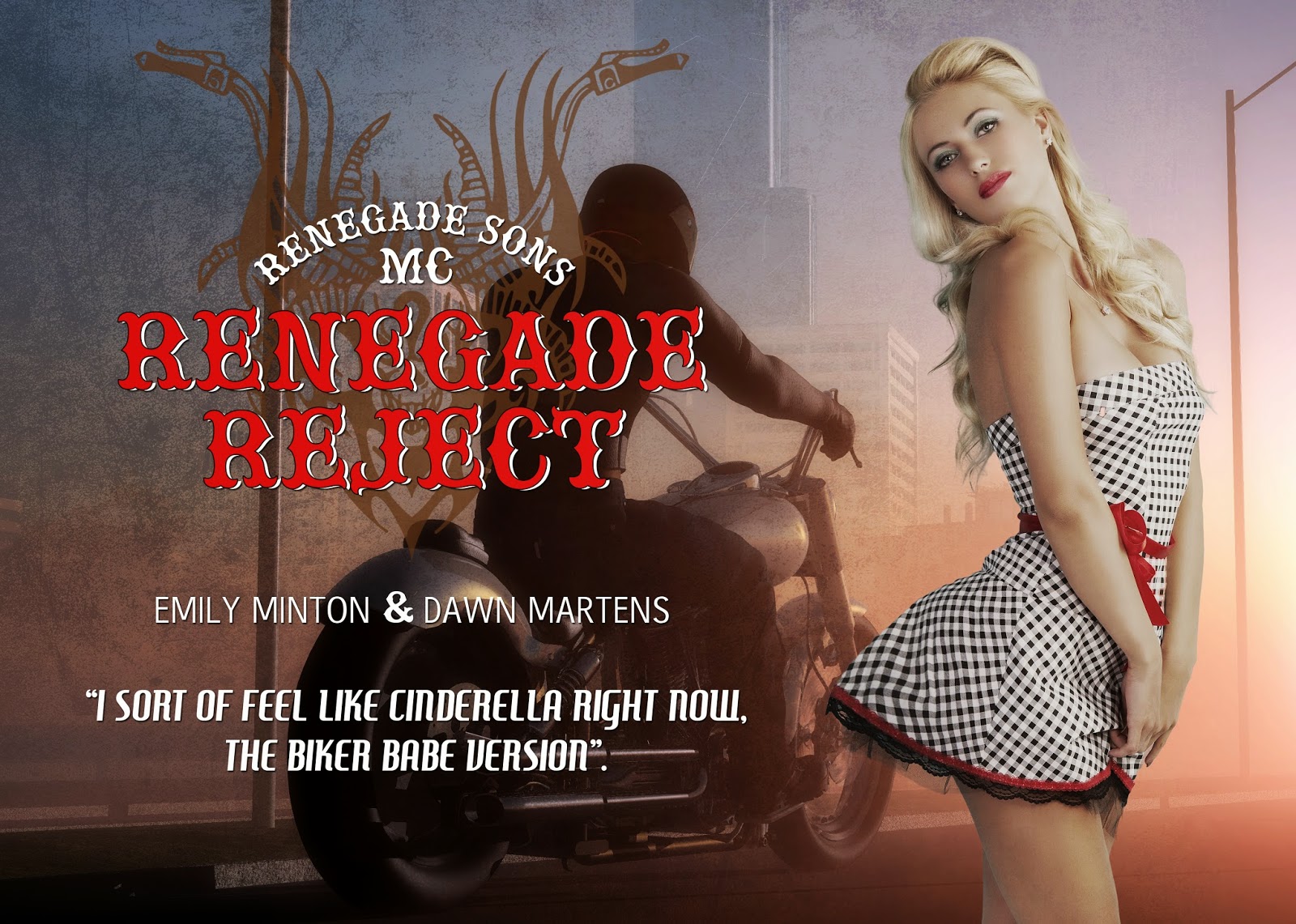 My Review: 5 stars
This was a very good book. If you haven't read the first book, Renegade Lady, go read it first. You really want to. I loved getting to know more about both Daisy and Preacher's pasts. It let me know why they were the way they were in the first book. I've got to say that from the first book, I loved Preacher. I knew that there was something in him that was broken, but didn't know what. Daisy is the same, except, my heart hurts for her more. Daisy grew up in the MC, she was supposed to be protected, and she was to a certain extent. The thing that pisses me off, is that way before the club found out what had been happening to Daisy - Someone should have seen what was happening and helped her out.
Now we know the reason why Timber went to prison. Why Preach was such an ass and a drunk. Preach and Daisy should have been together long before they actually were, but two certain people kept coming between them, time and again. Don't worry, they both got what they deserved. I think they both had it coming to them for all the shit they pulled. I knew from the first book that I didn't like them, but understand a whole lot more now, and that took the not liking to a whole new level. Some people may feel sorry for what happened to them because they're women, but I really don't. They both knew the rules of the MC, and they knew the punishments as well.
I loved that Timber and Reece kept saving Daisy. I loved that Kidd kicked the crap out of Preacher when he found out what he did, of course at the time, Preacher didn't know what he had done. Once he found out however, that was a whole different story. He pulled his head out and did what he should have done a long time ago. He went to great lengths to let Daisy know how sorry he was for everything that had happened between them, and vowed that he wouldn't let it happen again. Daisy wasn't buying it though. I really had to laugh at how far Preach had to go in order to keep her, but he did so willingly. He knew he had to prove to her that she really was his everything. I really loved the epilogue, that was awesome. I am looking forward to Blue and Tabby's story which is coming next. I'm also really curious about Skittles cryptic comment and want to know a lot more about that. I am also dying for Reece to finally have a good woman to love and take care of him. Truth is I love all the guys, and can't wait for all of them to find whatever it is that makes them happy. Emily & Dawn have done a fantastic job with this series so far. I was anxious to read this book, because I knew a little about Preach and Daisy, and was worried about the outcome. I should have known better. Emily & Dawn have made their characters so real, broken, fragile, all too human, and that's what keeps me coming back and wanting more.

USA Today best selling author,Emily Minton is a Kentucky native. Raised in Missouri, her family returned to Kentucky when she was a teen. She is proud to call the Bluegrass State home. She claims she bleeds blue--Wildcat Blue! Emily has been married to her husband, David, for over twenty years. They share two lovable but irritating teenagers, Jess and Bailey. She is also the proud mom of a feisty terrier mix, Rae Rae. Emily loves to read and has more books on her kindle than most people could read in a life time, but she intends to read every single one. Nope, no hoarding problem here! Her favorite author is Kristen Ashley, and she swears Kristen’s book Sweet Dreams changed her life. Emily has co-authored two books with Dawn Martens, Whiskey Lullaby and Renegade Lady. She has also written one solo book, Windows. Many more are floating around in her head, and she hopes to get them all on paper before long. She loves sharing her dreams with her readers.

Dawn Martens is a young, spunky Canadian Author, who is widely known for her best-selling “Resisting Love” series that she co-authored with Author Chantel Fernando. Being a wife to Colin, and a mother to two (soon to be THREE!) beautiful little girls (Sarah (6), Grace (3), Ava on the way!) hasn’t stopped this Canadian Firecracker from pursuing her dreams of becoming a writer! She has also co-authored “Whiskey Lullaby” (book one in the Love Songs series) with her friend and fellow writer, Author Emily Minton; on top of serving as a mentor and support system for many Authors in the Indie community over the past few years. 2014 is shaping up to be a phenomenal year for Dawn, as the highly anticipated book two in the Love Songs series titled “Broken”. She will also be releasing a brand new gritty MC series, “Renegade Sons MC,” with Emily Minton, that will for sure take their avid readers on yet another mind blowing journey. Dawn’s number one passion in life is the written word, and she’s extremely thankful that she has to ability to share the ramblings from the characters inside of her head with the rest of the world! She also may or may not have the hugest girl crush on Author Kristen Ashley, who is her personal idol and helped inspire Dawn in the beginning of her Indie career.