Sail Away With Me by Kate Deveaux with Excerpt, Cocktail Recipies & Review 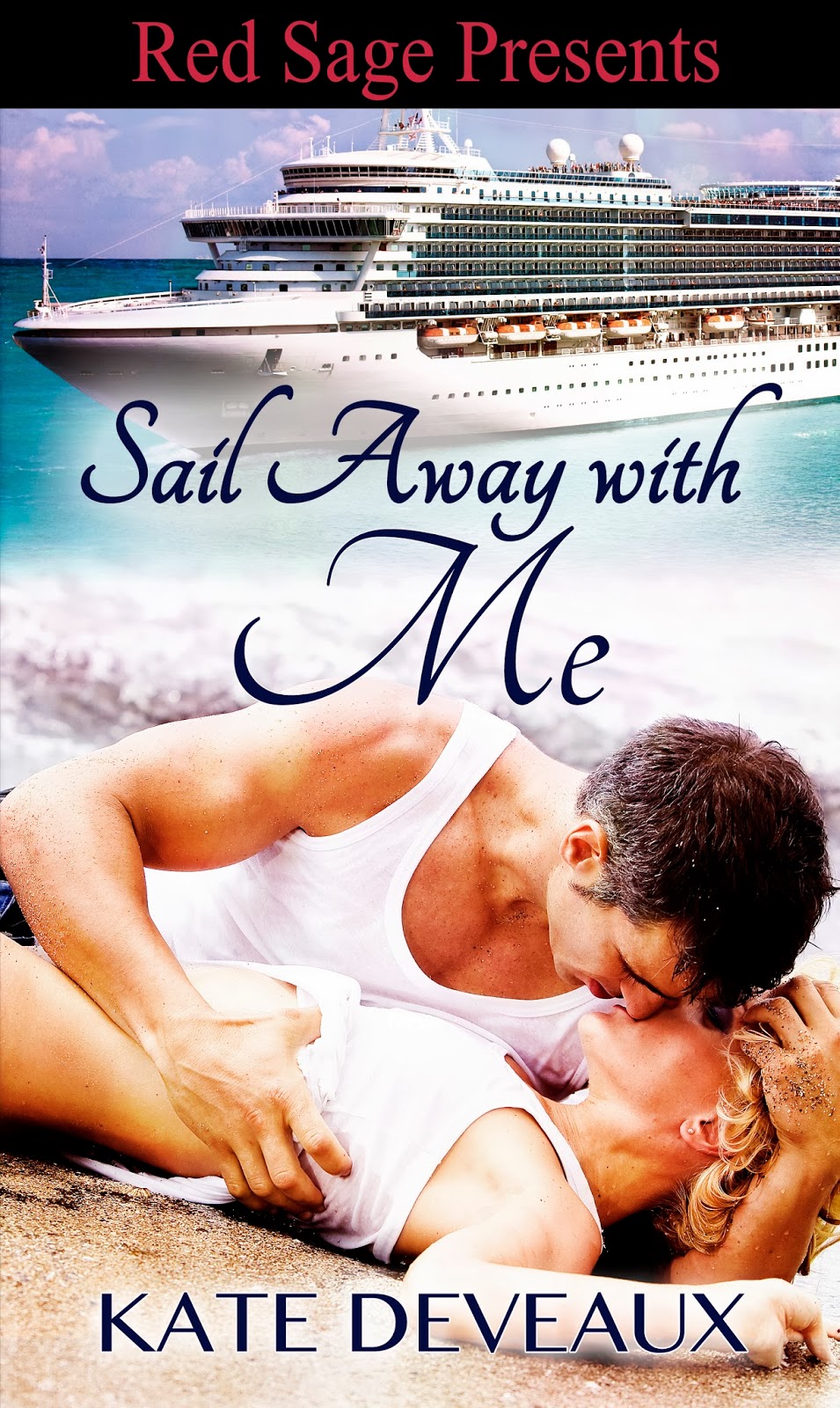 About Sail Away With Me:
Before Jody Carter and her three best friends ever set foot aboard the luxury cruise ship, Jody falls into the arms of uber hunky celebrity guest Taggart Keith, when he saves her shoe from falling to the depths of the sea. Their attraction is undeniable, but the recently divorced single mom knows the last thing she needs is to complicate her life in just seven short days. But that’s exactly what happens when Jody takes a chance — for once in her life— and gives into a week of sensational pleasure.  Taggart helps her discover her more sensual side — one tantalizing night at a time.

Excerpt:
“Hey there, Jody,” he called out.
“Oh, hi....Taggart,” she said with surprise, pretending she hadn’t seen him.
“We really have to stop meeting like this.” He smiled and walked towards her down the narrow hall dotted with luggage.
She laughed nervously at the cliché that was proving all too true if she was to keep her sanity. “I guess so. Well, this is my room.” She fidgeted with her keycard as he came up beside her.
“Mine’s just down the hall.” Taggart pointed behind him, but he just stood there, his tall frame close to her. She looked up at him, overly aware of the scent of sandalwood, one of her favorites. Very masculine.
“Mmm...coincidence,” she said, the hallway becoming smaller by the minute when he flashed that boyish smile, with one corner of his mouth raised. Cocky, but undeniably sexy at the same time.
Unable to break the gaze, she tried to insert the keycard into the lock, not paying attention to what she was doing. The card grazed the slot and she forced her eyes away from his.
“I guess you didn’t find your friends after all?” he inquired, leaning casually against the wall, as she slid the keycard all the way in the lock.
Caught red handed at her own lie, she smiled down at her shoes. “No, I didn’t.”
“So you can have that drink with me after all,” he stated flatly, placing his hand over hers as she held the key in the lock.
Her heart pounded in her chest. She couldn’t move a muscle. “I don’t think that’s a good idea,” she said.
He frowned but left his hand on hers. “Because?”
Because? Her mind raced. She couldn’t tell him it was because she was afraid. Afraid how her body trembled when he was near, how her cheeks burned and her sex thrummed.
“I’ll wait,” he said with a devilish grin eyeing the keycard still in the lock.
“I really don’t think it’s a good idea, is all.”
“You already said that,” he said straight-faced, but she could see the playful look in his eyes. As he removed his hand, he continued to lean easily on the doorframe, his face close to hers as if he had all the time in the world to wait for her to be ready. He was close enough she could see the barely visible laugh lines when he smiled and the slight five o’clock shadow on his chiseled jaw.
“Look Taggart,” she said, just saying his name made her heart beat faster. “I’m not ready for...” her heart beat rapidly thinking about just what she wasn’t ready for....to be intimate with a man.
“Ready for what?” he teased. A flush of desire rushed through her. He was playing with her, flirting with her.
She took her key out of the lock and looked up at him trying her best to hang on to some semblance of control. “Whatever it is, I’m not ready.”
“Fair enough,” he said, completely unarming her with his understanding.
“Really?” she asked, almost disappointed he gave in so easily. “Really,” he said, imitating her. He was so fucking sexy she was going to melt right there in the
hall. “Well in that case, maybe I’ll have that drink with you, but it better be a quick one, the girls will wonder where I am.”
“Good,” he said slowly, and leaned towards her, his body inches away, her heart pounding and her body humming with anticipation. He was so close she could feel the heat from his skin, the pulse of his heartbeat.
Her lips met his, at first tentatively, as if unsure of herself. His hot mouth was inviting as she kissed him again, this time parting her lips as his arms wrapped around her waist, his tongue finding hers. Instinctively, she reached one arm around his neck and pulled him to her, kissing him more urgently. His stubble against her chin made her melt when he grasped her tighter and kissed her back. Hard and hungry. Her body quivered as she pressed against him, their mouths exploring one another.
Lost in the moment, her mind swirling and her body electric, she ran her hands along his broad back, her breasts squashed against his muscled chest, his hands running along her body. It felt so good. He smelled so good, tasted so good, it had been forever since she’d felt this way. So...so...so fucking turned on. Demanding and capable, his hands roamed wantonly over her hips and then cupped her ass.
SAIL AWAY WITH ME and these recipes bring a whole new meaning to “I’ll have what she’s having!”
COCKTAIL RECIPES: 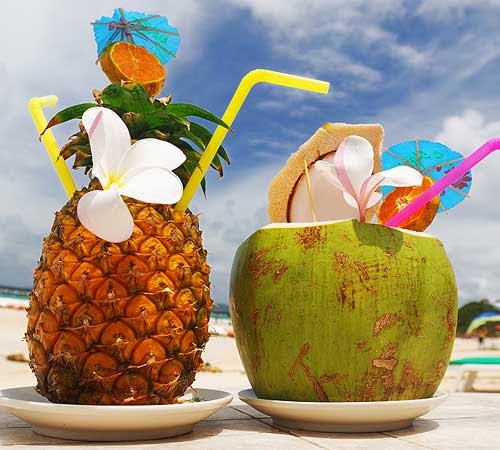 My Review: 4 1/2 stars
What an awesome read! This book was set half on the Cruise, and half in Jody's little town. I thought it was pretty awesome that Taggart would go to the effort of trying to make their relationship work, even though it was supposed to be a shipboard thing. Both Jody and Taggart knew it could be something more. They just needed to have the will to overcome the obstacles in their way and move forward. I loved how Taggart was with Jody's son; open and honest. That's the way to be wtih anyone, in my opinion. Great characters in this book, all the way around. I loved that the storyline moved forward at a steady pace and kept things interesting. You never knew what was going to happen, and I liked that. Thanks Kate, great job with this book. I'm going to have to see if Kate's written any more books, and check them out. A few more book on the to-be-read shelf won't hurt me. 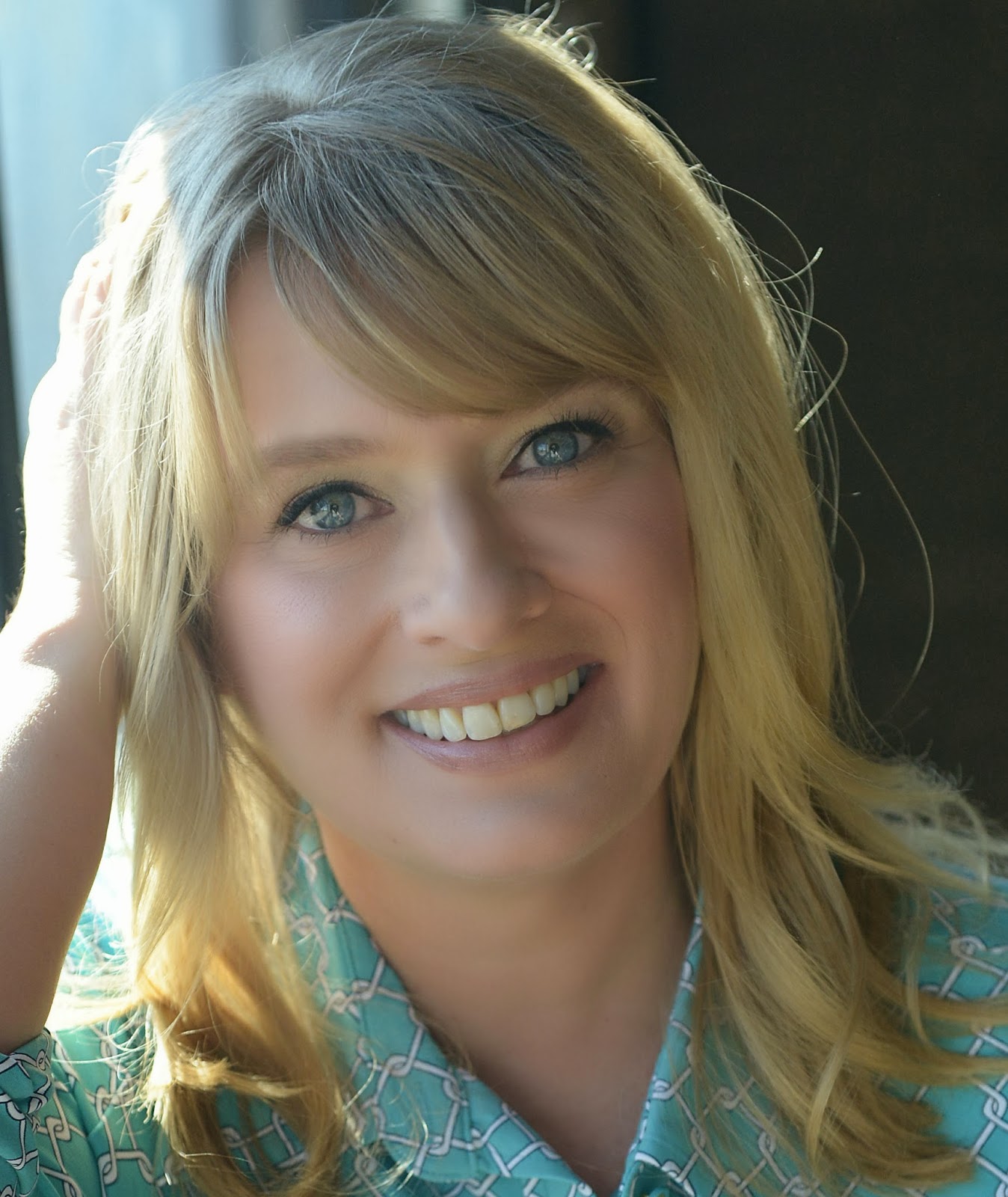 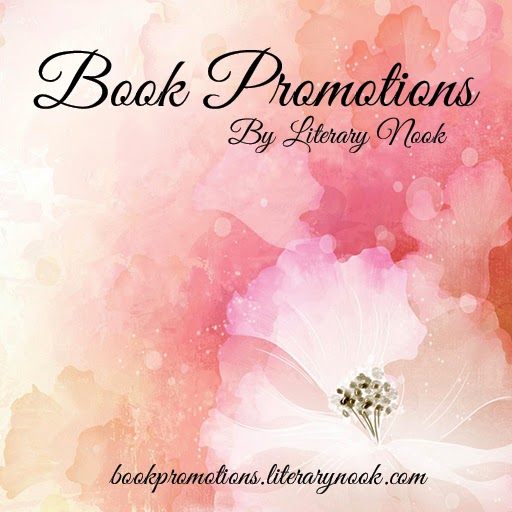