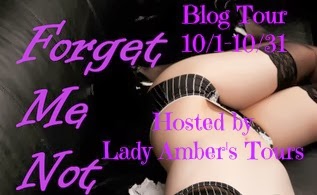 Book Info:
Title: Forget Me Not

Lily had a crush on her brother's best friend, Derek for years - which led to their steamy night ten months ago in her bedroom. Now, Lily is going off to college and she and Derek are still going strong. However, when school starts, she realizes it's hard to maintain a relationship while also trying to live her own life. She and Derek find themselves falling apart and Lily has no idea where to turn.

Enter Jack. Everything about him is wrong for Lily and she knows it, but she can't stop herself from being attracted to him. When things implode with Derek, it's Jack who is there to pick up the pieces - and show Lily an entirely new set of experiences she didn't know she was missing.

Of course, Jack has his own problems and once Lily gets to know him better, she starts to wonder if she can handle all of Jack. When Derek reappears on the scene, Lily is forced to decide between two guys and herself. Can she find herself without losing the people who matter in the process?

See where it began in the short story, "Her Brother's Best Friend." He moves closer and already my body is responding. He smells like cigarettes and leather, two smells I never thought were sexy until now. I want to fall into his body, to be wrapped in his arms, and I fight it. It’s wrong and it makes no sense. I have everything I could ever want. Jack is just a distraction.

He steps closer still and kisses my neck. His lips are soft, which is unexpected, and it sends a shiver through me. Jack brings me in to his chest. I can feel his heart beating; it’s quickening and it matches mine. I feel his tongue sliding down along my collarbone. There is nothing like this, but I need him to stop. And yet, I never want him to stop. “I’d love to know exactly what kind of girl you are.”

Almost as if they are not my own, my hands slip between his jacket and his shirt. The heat of his skin burns me even through the fabric of his clothes. His lips continue to travel downward, but as they reach the curve of my breasts, something in me wakes up. I tear myself away from him and back up a few inches.

“Where is he?” Jack asks. His eyes are burning.

“Where is your boyfriend? You’ve mentioned him before, but you run into me a lot for someone who’s so in love.”

My Review: 4 1/2 stars
When I started this book, I just kept reading, got a little confused, then pissed off; but I kept reading. This was a really good book. I was confused and pissed off because of the way that Lily was acting after something had happened with Derek, but then after thinking about it decided to just let it go. Jack may not have been the ideal person initially for Lily, but he was who and what she needed, when she needed him. I really enjoyed the parts that I can't tell you about, because it gives away a lot of the story. So I'm just going to have to say that Lily was right in her actions when it came to both Derek and Jack. Those actions pushed them all in new directions that they needed, whether Lily was the only one who realised it at the time or not. The ending was fantastic and I really can't wait to read Lily of the Valley to find out Jack's perspective on everything. 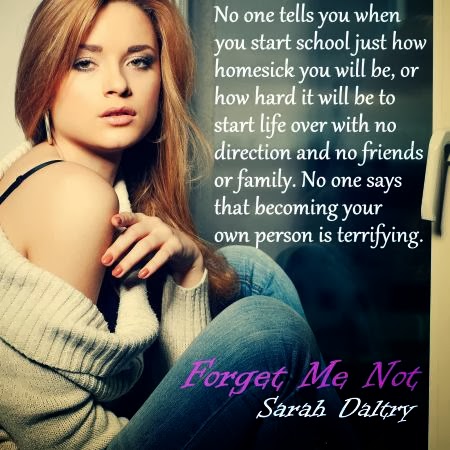 Sarah Daltry writes erotica and romance that ranges from sweet to steamy. She moves around a lot and has trouble committing to things. Forget Me Not is her second full length novel, although she also has several story collections and two novellas available. Her other novel, Bitter Fruits, was available shortly, but is now in the contract phase with a major publisher. When Sarah isn’t writing, she tends to waste a lot of time checking Facebook for pictures of cats, shooting virtual zombies, and simply staring out the window.