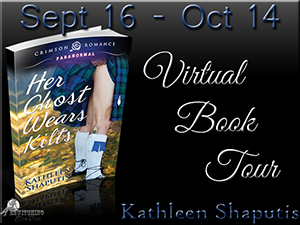 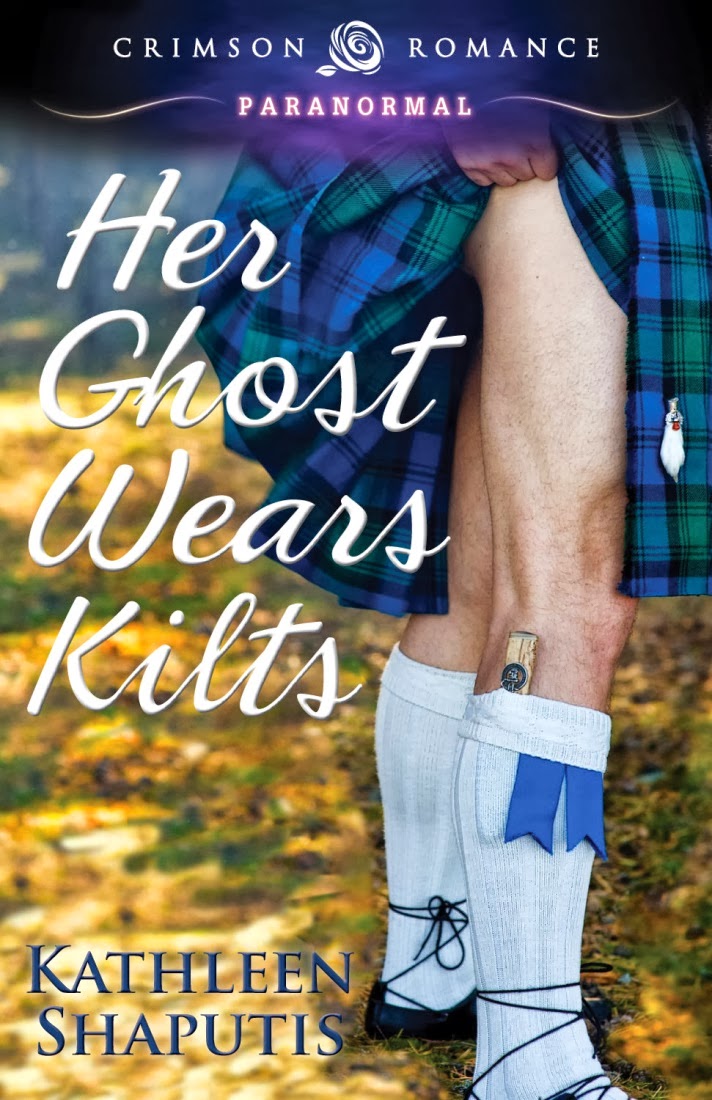 Drag queens, a ghost and murder, oh my. Love spirits through the modern day tale of inheritance and greed, crossing the vale between worlds.
Baillie thought life was content, successful in the Pacific Northwest until her bookshop became haunted. Inheriting a Scottish castle leads her on a wild adventure of Celtic chaos where she meets her gorgeous ghost. Finding her life in danger, Baillie calls the diva squad to the rescue: her friend Gillian Nation and his girls.

Will she choose her normal, safe existence or grab onto an unusual love that makes life magical?

The cat flattened itself to the carpet near the front bookcase, ears lost against its orange-striped head, frozen in fear. A terrified hiss leaked through his open mouth and, slinking backward, the cat spun and ran toward the back of the store.
Catching a brief flash of orange out of the corner of her eye, Baillie shook her head. “Now what’s gotten into Sebastian? Must be a mouse.” She fanned her painted fingernails along the spines of books stacked on the shelf beside her. Listening to the hushed clicking sounds of her nails against the bindings as she walked down the aisle, she inhaled the intoxicating aroma of paper and leather around her. She loved opening her bookshop every morning, where antique classics, used and new volumes of various sizes filled the shelves around her. Framed paintings by local artists dotted the walls between the bookcases.
“Morning,” Baillie called to the previously owned hardbacks without the slightest apprehension of appearing insane. She talked to inanimate objects all the time—great audience, no heckling. Besides, I’m alone in here unless you count the cat, and you can’t count on that spoiled feline for anything. Where did he dash off to just now in such a hurry?
A thin volume of poems lay exposed on a shelf. “You don’t belong here,” Baillie said, sweeping it up to reshelve. She hesitated; the book cover felt cold in her hand, the worn leather chilling her fingers, sucking the warmth from her fingertips in seconds. She quickly shook her head to keep her thoughts from running amok. Of course the book was cold; in the Northwest, things always seemed cold.
“I swear someone helps themselves around here at night. The least they could do is put the books back where they belong when they’re done.” She turned and pushed a ceramic bookend aside and placed the wayward book next to the others as a quick chill shivered down her spine.
“Hey, Einstein, ol’ buddy.” Baillie grabbed an ornate feather duster from a brass umbrella stand nearby and took a few housekeeping swipes against the framed lithograph hanging on the wall. “Dang, I’m looking more like you every day.” She checked her reflection in the glass. “Tell me, did you see who moved Robert Burns’ book of poems last night? Maybe I need to borrow your glasses—going blind in my old age and missed putting it away after closing.”
Baillie turned, whistling the theme song from Fame, at the end of the aisle. She missed seeing the slow, deliberate movement as the same book silently shifted out from the shelf. The dark brown edition slid away from the other poetry books, hanging suspended for a moment, then lay back on the empty surface of the shelf. The ceramic bookend moved, closing the empty gap.
The front door of the shop opened with a tinkling of metal chimes. “It’s just me,” yelled a female voice as she came in.
“I’m in the north quarter, Sally. Would you turn on the computer?” Baillie responded from somewhere behind the walls of books. “Time to open up, I guess.”
“No problem, boss.” Sally dropped her purse under the counter.
Baillie knew her assistant’s routine by heart: She’d click the black toggle switch on the power strip with the toe of her shoe, sending juice to all the electronics at the same time. Baillie heard the calculator, printer and credit card unit each create its own hum as Sally pressed the power button.
“How are the hot flashes this morning?” Sally asked.
“Midlife under control, thank you very much young whiner.” Baillie dusted another shelf with a few fast swishes. “You can kick the personal heater on for a while.”
“Just a little damp for June this year, you know. Some of us don’t have the benefit of hormonal heaters,” she taunted.
“I heard that!” Baillie continued up and down the aisles, swishing the duster back and forth. Suddenly, a bitter cold swept around her, sending a blinding chill through her body. She gasped from the icy shock. Baillie couldn’t catch her breath as the splash of numbing cold flowed into her heart and out again, pounding inside her chest. The reddish blond hairs on the back of her exposed neck stood on end. Her teeth chattered against the chill, like Lucy Ricardo locked in the meat freezer.
“What the …?” She leaned against the shelving for support. “Whoa.” Baillie blinked rapidly and focused on her right hand, more specifically the beige metal shelf under her crimson-painted fingernails. The metal felt warm, warmer than her soul at the moment. Goose bumps traveled up her bare arms and under her short-sleeved blouse. Titles describing Scotland and its clans stood in military straight rows in front of her.
As quickly as it had struck, the air around her trembling body returned to normal temperatures. She took a shaky breath, mentally searching for some logical explanation for the bone-chilling cold. “Who turned the air conditioner on?” she whispered to herself with mock confidence. Looking around the cramped quarters of bookshelves as she moved away, the store seemed peaceful. She dropped the feather duster into a stand with a soft thud.

My Review: 3 1/2 stars
This was different for me. It took me a while to get into it, like half of the book, but once I did - it was good.  I loved the way that Kai got his Annie. And the "girls" were super too. I loved the descriptions of the castle and the grounds once Ballie got there. Absolutely loved Dougal, fiery thing that he was. I think it could have been better if the first part were shorter, but that's my opinion. On the other hand, it did show the contract between the places Ballie was living and the different lifestyles nicely.

Kathleen Shaputis, author/ghostwriter, lives in the Pacific Northwest with her husband, Bob, where curling up with icy Diet Coke, writing romantic comedies is her ultimate paradise.
www.shaputis.com