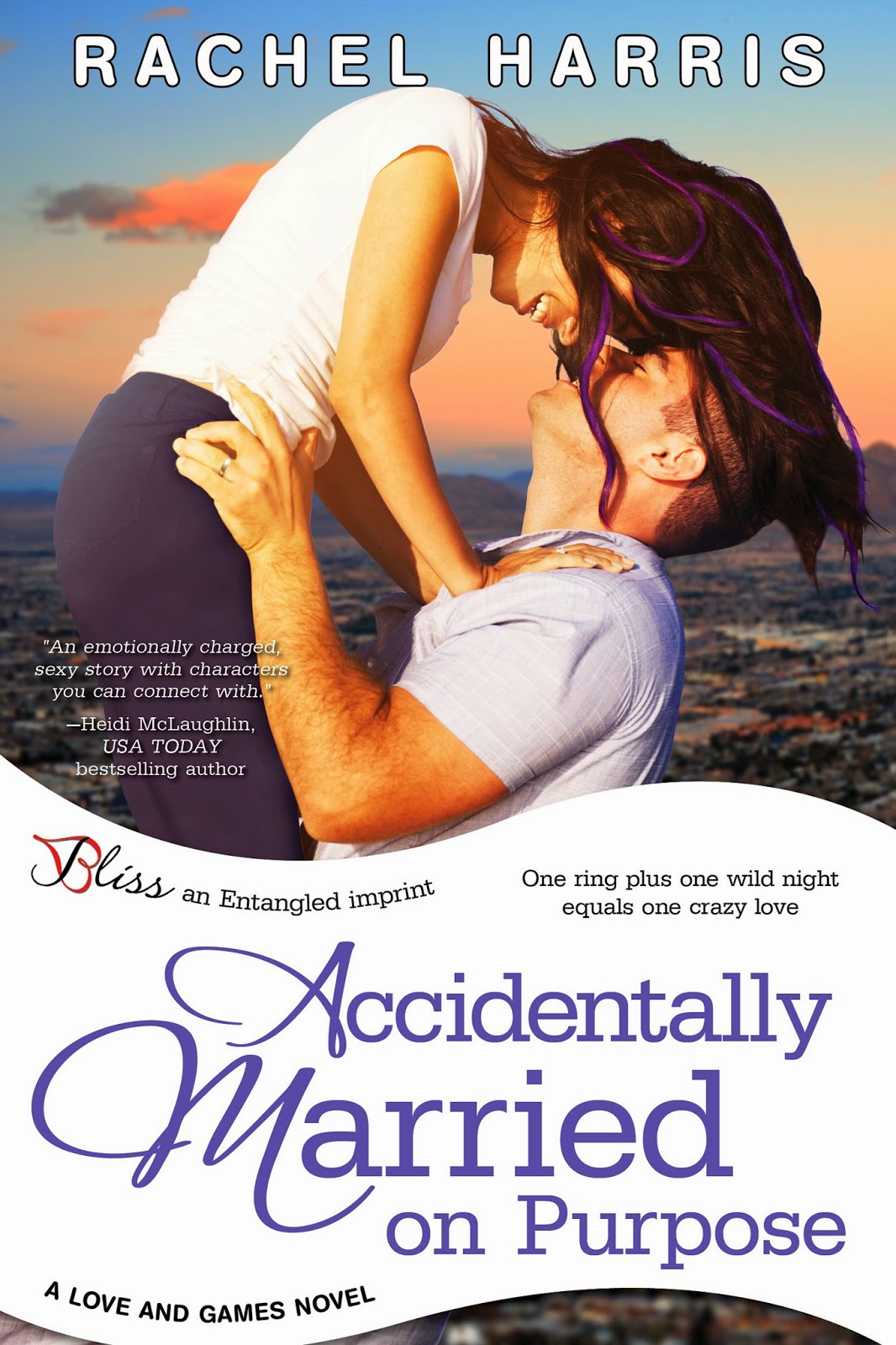 
Book Synopsis:
One ring plus one wild night equals one crazy love.

Sherry Robicheaux loves men. She loves love. And she loves an adventure. So when she meets a mysterious man while working backstage at a country music concert in Vegas, she’s all about what happens in Vegas staying there.

Country music superstar Tyler Blue just wants a weekend of anonymity…though there’s something about the spunky waitress with the streaks of purple hair that tempts him like no other. Until the next morning, when they both wake up with fuzzy memories…and rings on their fingers.

Convincing Sherry to maintain the ruse for his public image isn’t the hardest part—it’s reminding himself that their time spent playing husband and wife in her small town of Magnolia Springs can’t last. Tyler’s first love will always be music—and the road is no place for a sweet downhome girl.

Excerpt:
Laughing, he threw open the door and tore up the drive, expecting Sherry to be right behind him. But when he reached the front door and turned around, she wasn’t on the porch. Confused, Tyler walked back a few steps and found her instead in the yard, face tilted to the sky, arms stretched to capture the liquid drops.
In his experience, women tended to get all Wicked Witch when it came to the wet stuff—they freaked if it touched them. While Sherry wasn’t overly dramatic about fashion, he’d seen her tackle box filled with makeup and witnessed the application ceremony. If anyone would avoid the risk of messing it up, it’d be Sherry.
But then, as he always seemed to be when it came to this woman, he’d been wrong.
“What the hell are you doing?”
She stuck out her tongue like a kid catching snowflakes and closed her eyes as the rain pelted her once flawless face. Lowering her head with a grin, she said, “It’s not like we’re gonna melt. Haven’t you ever danced in the rain for fun?”
“Danced?” Tyler edged closer to the end of the covered porch, shocked anew. Raising his voice over the torrent, he shook his head. “Can’t say that I have.”
His confession earned him a playful grin, and as she held out a hand toward him, she said, “There’s a first time for everything.”
Right now, he was dry. He was under a roof, warm and adequately dressed to impress the in-laws. But her smile was hypnotic. Placing his hand in hers, unsure why he was even doing it, he let her tug him into the storm.
As expected, it was cold. And wet. If anyone saw them out here—and with their photographic luck, people were definitely watching—they’d think he was nuts. But that didn’t matter because his adorable, silly, crazy-as-hell wife dropped his hand and began dancing. Spinning in a circle, laughing at nothing, scrunching her nose and making a Mick Jagger face as she shimmied her shoulders and swirled those luscious hips.
It was mesmerizing.
“Dancing isn’t a spectator sport,” she called out, eyebrow lifted, twirling again. “Don’t tell me you don’t dance, music man. I ain’t buying it.”
Oh, he had some moves. Not great moves, mind you, but he could carry his own. So, with his sassy brunette watching and waiting, Tyler gave the quiet street a cursory glance, and then bopped his head.
“Niiice,” Sherry teased, throwing her head back in a laugh. “Watch out, Timberlake.”
Shaking his head, a smile twitching his lips, he added his feet. Pleasure filled her eyes as she followed his every step, so he also did a Michael Jackson moonwalk, completely with a crotch grab. That sent her into hysterics. And made him feel like a damn king.

My Review: 5 stars
This was such a great book! I loved the whole concept behind it, the characters and the story line. Everything was well written, and it just pulled me into the story of Sherry and Tyler. I loved that Sherry had no clue who Tyler was, and I'm certain he found that very refreshing. I also loved that even after she found out who he was, she really didn't treat him all that different. Tyler and Sherry definitely went into this very inebriated, but I loved their solution. I loved that Tyler was so set on living the dream for himself and his dad, but once he talked to his dad, that gave him new insight. That new insight made him look at things with Sherry differently and want more for himself. I definitely loved the end, I certainly didn't expect that at all, but it was most welcome. I love reading Rachel's work, it always pulls me into the story and makes me care about the characters, and I'm always happy with the result. Always.
Author Bio:
Rachel Harris writes humorous love stories about sassy girls-next-door and the hot guys that make them swoon. Emotion, vibrant settings, and strong families are a staple in each of her books...and kissing. Lots of kissing.

A Cajun cowgirl now living in Houston, she firmly believes life's problems can be solved with a hot, sugar-coated beignet or a thick slice of king cake, and that screaming at strangers for cheap, plastic beads is acceptable behavior in certain situations. She homeschools her two beautiful girls and watches way too much Food Network with her amazing husband.

An admitted Diet Mountain Dew addict, she gets through each day by laughing at herself, hugging her kids, and losing herself in story. She writes young adult, new adult, and adult romances, and LOVES talking with readers!