The Broken Road Series by Melissa Huie with Excerpts & Reviews


Megan Connors’s life is not going in the direction she thought it would. With her love life in the dumps, she doesn’t think it could get any worse until her long-time crush, Shane asks to move in. After all, he has no clue that she’s been in love with him for the past ten years. But fate has a way of turning things around.

As their relationship goes from “just friends” to lovers, life takes a turn for the unexpected. Shane isn’t the person that Megan once fell in love with all those years ago. Shane has a past; murder and drugs is a portion of what he’s been hiding and is only revealed once the FBI knocks on Megan’s door.

Secrets, tragedy, and deceit force Shane—and Megan—to make choices that will change their lives forever. Once Megan learns the truth, will she still want to be with Shane? Or will someone else be at the end of her broken road?


I shucked off my snow boots and coat, locked the doors, set the alarm, and headed upstairs with Penny in tow. After peeling off my clothes, I paused. I normally sleep in my underwear. That would have to change with Shane living here. It could be awkward if he peeked in and saw me in nothing but my Victoria Secret panties. I put on a tank top shirt and cotton boxers and climbed underneath the cloud-soft down comforter. Penny climbed onto her large dog bed and did her usual routine of turning around until she got comfortable. This had been one hell of a day and I was over-exhausted. The last thing I remember was hoping that Shane came home alone.

My Review: 4 1/2 stars
What a thrilling ride to be taken on! Megan initially lets Shane move in because he needs a place to stay. Total torture for her initially, because they're friends. Friends that are both holding something back from the other. There were all kinds of things going on, and Megan didn't know what was really happening with Shane. The doubts and questions rolling through her mind were eating her up inside. Shane knows what the truth is but he can't tell anyone. There is a lot of action and some serious romance going on, but there's one hell of an ending that you certainly don't expect. Kept me glued to the pages once Shane and Megan got involved because of the twists that just kept coming. Great job Melissa! 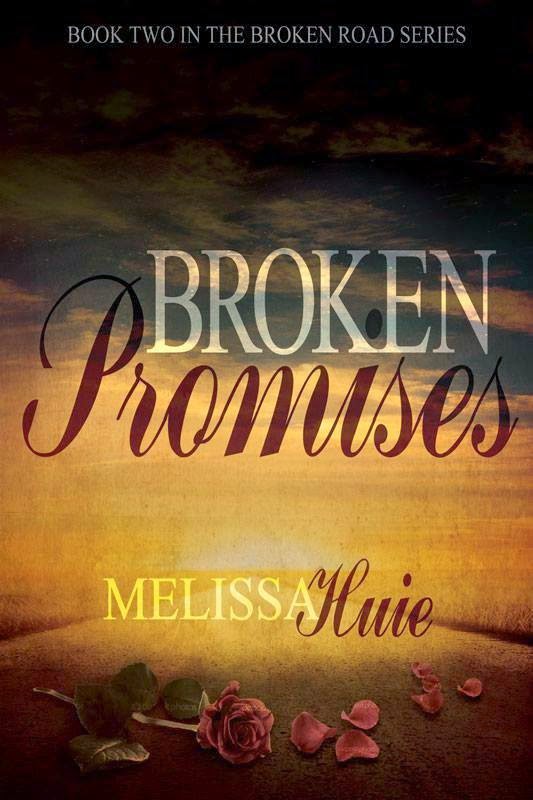 Broken Promises Synopsis:
The Sequel to the sexy, suspenseful novel, The Broken Road

“A day never went by when I didn’t dream about Shane, that one day he would come home to us. I imagined that our days would be filled with talking and reconnecting. Our nights would be full of hot, sweaty sex. However, things weren’t going the way I imagined. Baby steps, Megan. He just needs to adjust.  I couldn’t change what happened and we would have to take things in stride.  We can’t be the same couple we once were, not overnight. “

When Shane shows up at Megan Connors’s carport one rainy night, Megan thinks she was dreaming. The man who stole her heart, the father of her unborn child was the same man she feared dead from drug Cartel explosion. Elated and overjoyed, Megan believes they will finally get their happy ending.

But the happiness doesn’t last long. Shane’s long road home created demons, demons that Megan can’t fight. Past discretions come back to haunt them, and with that comes the paranoia and the distrust.  And the trouble doesn’t stop there. Danger threatens their lives at every turn, and when the time comes, Megan must make the ultimate decision.

Will Shane and Megan have their happily ever after? Or will that be another Broken Promise?

Excerpt from Broken Promises - Chapter One
“I couldn’t get to you fast enough. Every way I turned led me farther and farther away. I don’t how I made it back. The only thing that kept me going was hoping that you were all right. I love you so much. You don’t know … you just don’t know how you kept you kept me going,” he whispered and lowered his head to mine.

The feel of his lips, the heat of his breath, pulsed through me like a shot of lightning. I shrugged off my towel and threw my arms around him, responding with everything I had. The pain of losing him, the overwhelming joy of seeing him, the desire that had been suppressed for so long, all these emotions washed over me like a waterfall. I held onto him as if he would disappear at any moment.

His tongue caressed mine like a familiar dance partner. Breathtaking and sensual, my pulse raced. My blood boiled. Muscular arms held me against his body, as close as we could with this basketball between us. I mentally groaned. It became difficult to keep him close, and the more I tried, the more awkward it felt. Despite our emotions running high, we could no longer ignore the elephant in the room.

My Review: 4 1/2 stars
I love the conclusion to this series! If you haven't read the Broken Road, stop and go read it before reading Broken Promises.
This book picks up right where the first left off. I was so glad when Shane actually came home. I was so happy that he wasn't in the house when all that happened. I loved how protective of his growing family he was, but at the same time a bit frustrated. I think they could have benefited from talking things through a bit more, but that's my opinion. Shane and Megan are spectacular together and I'm so happy that she didn't have to go through all of this alone. Some definite twists and turns, but that's what makes it such a good book. I loved the way things ended. Melissa did a great job with this series!

About the Author
Melissa grew up in Maryland by the Chesapeake Bay, where her favorite memories took place near the water. Now she lives near Washington, D.C. with her family, dog, and a lot of fish. In between the chaos of laundry, chasing after her three children and trying not to burn dinner, Melissa continues to find her escape by feeding her addiction of reading and writing about love, suspense, and sarcasm.

Melissa loves to hear from readers! She can be contacted by:
Email – melissa@melissahuie.com
Website – www.melissahuie.com
Twitter – www.twitter.com/melissahuie
Facebook – www.facebook.com/melissadhuie
Goodreads – www.goodreads.com/melissa_huie
Posted by Unknown at 1:00 AM