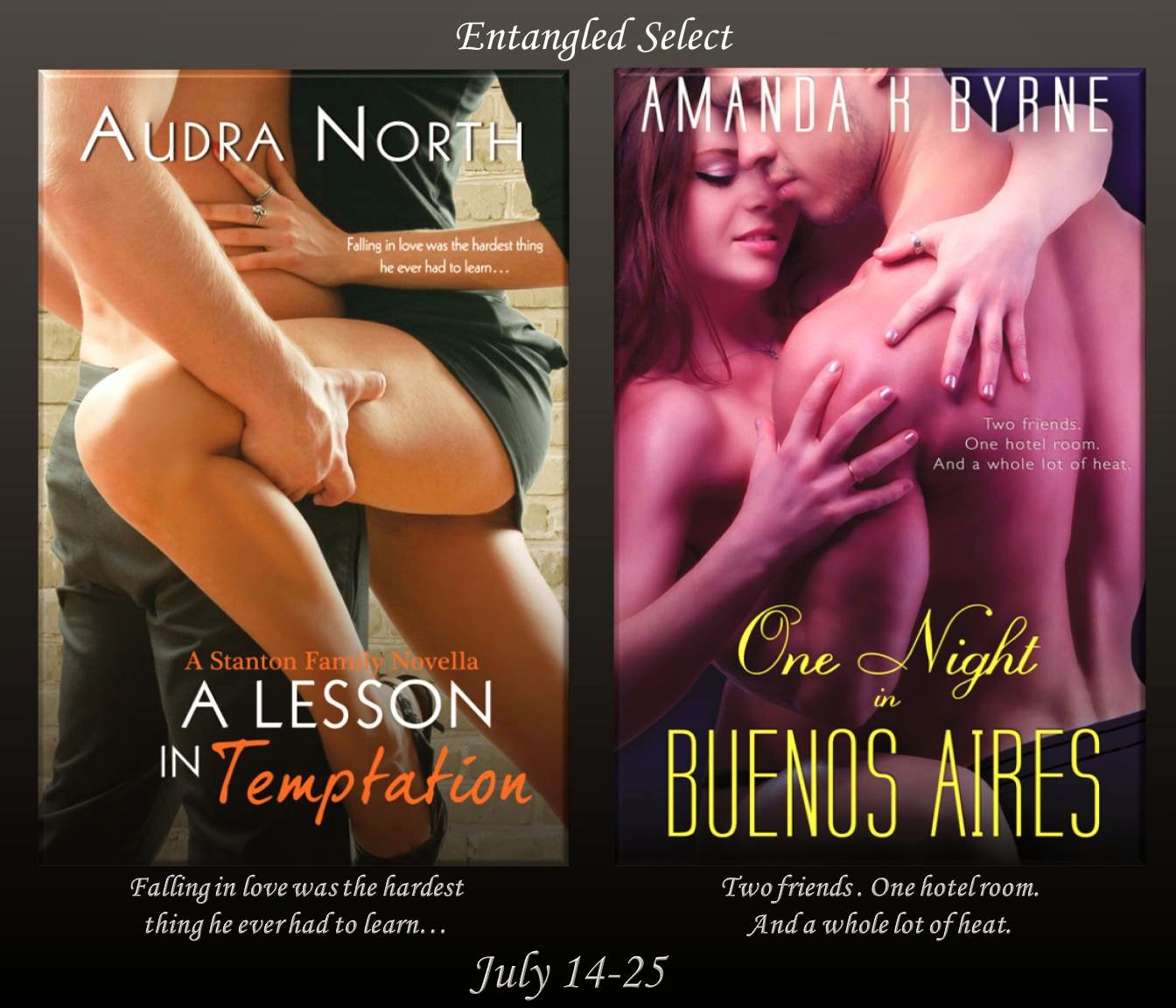 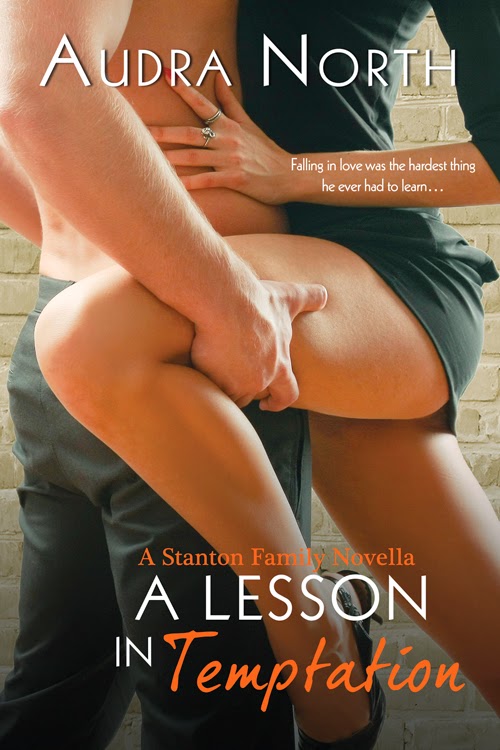 A Lesson in Temptation by Audra North:
Adam Harkness pulled himself out of poverty to become one of the world's most respected Finance professors, but at the cost of his personal life. When a well-meaning friend gifts him with a dance course, Adam decides to attend one class out of courtesy, but no more than that. He has work to do, after all - or at least, that's what he tells himself.

After being bullied in high school, Julie Stanton took refuge in her studies. But now that her hard work has paid off and Julie has found success in her job, it's time to focus on finding the same happiness in the rest of her life.

When Adam walks into the same tango class that Julie signed up for, she recognizes him immediately as the professor whom she had a crush on in college. Both Adam and Julie have proven themselves to be excellent scholars. But when the attraction between them turns into something more, will they be able to open their hearts and learn a new lesson - how to love.

Excerpt:
Julie felt Adam’s breath hitch in his chest, felt something hard and insistent rise against her thigh. He turned his head to look at her, his ocean-blue eyes deepened to a rich sapphire.

Oh my God. Oh my God he’s going to kiss—

But the loud clap of hands interrupted her thought, and abruptly he let her go, then backed away blinking. Ivana’s voice grew louder as the rush of blood left Julie’s head, and her heartbeat slowly calmed.

“Lovely dancing, everyone! Come back into the circle now. I have one last thing to show you before we go.It’s time for the next step.”

Julie couldn’t help but think that truer words had never been spoken.

They watched as Ivana demonstrated a move and asked them to practice it at home just before class ended. Julie hesitated for just a second. His body had responded. Could she maybe see if she could change his mind, even a little? She hadn’t wanted something this badly for so long…
Just go for it!

“Do you want to get a drink?” She blurted the words before she could overthink it. There. Done. Extending the invitation had been almost painful, but she was not about to turn tail and run from a little discomfort. She’d been there, done that, and she was through with it.

He stared at her for a second, then said slowly, “I should really get home.”

She tried not to sigh with disappointment. “No problem. It was good to see you tonight, anyway.”

She didn’t want to ask him whether he’d be here next week. More than likely, his answer wouldn’t be what she wanted to hear. She might not mind a little discomfort, but there was such a thing as being just plain stupid. But before she could tell him good-bye, Adam shrugged.

My Review: 5 stars
I really loved this book from Audra. I've read a few of her books and they never disappoint. I loved how Julie slowly got Adam to come out of his shell. With her at least. Who knew Tango lessons would be such fun? I enjoyed the dynamic between Julie and Adam, and loved Julie's willingness to go for what and who she wanted. Adam has been working too hard and not getting out enough. He's pissed at his friend for giving him the gift of Tango lessons, until he sees Julie when he walks in. Then all he can think about is a missed opportunity three years ago. Julie thinks the same thing, and isn't going to let this opportunity pass by. Adam and Julie have definite chemistry and more. I loved when Adam let loose and accepted Julie's offer. I knew there would be more between them than sex, however. I absolutely loved every word out of Adam's mouth at the end. They are perfect for each other, and I'm glad that someone finally saw the possibilities of what could be.

Audra North’s Bio:  Audra North fell in love with romance at age thirteen and spent the next twenty years reading as many romance novels as she could. Even now, after having read over one thousand of them, Audra still can't resist the lure of a happily ever after, and her collection continues to grow. She lives near Boston with her husband, three young children, and a lot of books. Visit her website at audranorth.com or find her (way too frequently) on Twitter
Website: Blog: Twitter: Facebook: Goodreads: Newsletter 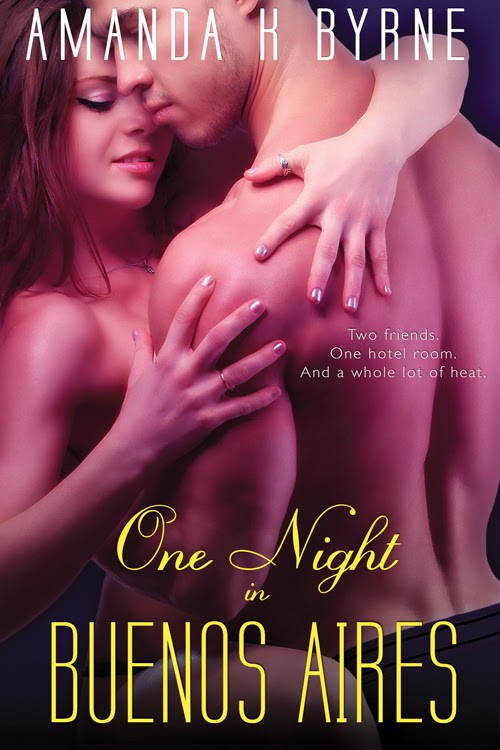 One Night in Buenos Aires by Amanda K. Byrne:

As a reward for a hard-won contract, best friends Drea and Joe head to Buenos Aires for sun, wine, and the tango. But their week of relaxation is off to an ominous start when a reservation mix-up leaves them with only one option: one room…and one bed.

Exhausted from travel, the two friends figure it won’t be a big deal to share a bed for one night—right up until they wake wrapped around each other and seconds away from, well, you know.

When the two decide to follow through on their impulse, they protect their friendship by agreeing that when the vacation’s over, the fling’s over. While Drea’s convinced it’s nothing more than a mutual itch, Joe discovers Drea might be everything he’s ever wanted. Now all he has to do is convince her that what happens in Buenos Aires doesn’t always have to stay in Buenos Aires.

Excerpt:
“There’s a show? Cool.” He studied the runway.

Before she could say another word, the same small man she’d spent most of the afternoon chatting with over glasses of wine swooped in. “Baby, you came!” Two air kisses, one beside each cheek. “And this?” He stroked Joe’s arm suggestively. “You brought me this tasty piece of man meat? Yum!”

She burst out laughing at Joe’s expression. Comical horror slid into stoic as he allowed the man to fawn all over him. The fact her new friend had a face full of makeup made it even better.

Her giggles continued while Joe glared at her, mouth pinched as he fought off a smile. He leaned forward until their noses bumped. “Careful. Or you’re gonna get it.” He flicked his tongue out and swiped her chin, and she squealed.

She plucked up her napkin and wiped her chin. “How mature.” She relaxed a fraction more. Her body might be reacting in new and scary ways to his touch, but he was Joe. Still prone to moments of juvenilism. Still making her laugh.

He put his hand on her thigh, fingers playing with the hem of her dress while they skimmed the menus. Anxiety and desire took up swords in her stomach and started battling. Higher. Off. Don’t stop. Do. She placed a hand over his, curled her fingers around it, and shifted it higher, under her dress.

His long, slim fingers flexed hard on her thigh. He lowered his menu, the question clear in his eyes. It was a fine edge she was walking. One nudge and they’d tumble over into a swirling mass of lust and heat and frenetic energy. He’d promised her, though. Promised no matter what happened between them they’d hold on to their friendship. Above all, she trusted him.

So she nodded, and his hand slid up, stroking the sensitized flesh.

Amanda K. Byrne’s Bio:
When she’s not plotting ways to sneak her latest shoe purchase past her partner, Amanda writes sexy, snarky romance and urban fantasy. She likes her heroines smart and unafraid to make mistakes, and her heroes strong enough to take them on.
If she’s not writing, she’s reading, drinking hot chocolate, and trying not to destroy her house with her newest DIY project. She lives in the beautiful Pacific Northwest, and no, it really doesn’t rain that much.