SYNOPSIS
Sometimes when you can’t go back, the only way out is to descend into the darkness.
my Captor
When I woke in that place, I just wanted to survive. But survival came at a cost, for which they demanded my will and body.
my Master
With pain came acceptance. Fully-dependent on the man who claimed me, I learned to appreciate what I had-life and relative safety.
my Protector
I watched him spill blood and tend my injuries. With betrayal came a revelation.
The only way out was to bring them all down or die trying.

EXCERPT
Through the haze of sleep, I felt hands on me. Cold and rough. I thought for a fleeting moment that it might have been Kyle. Then, I remembered our break up. It had happened weeks ago, but maybe that part was the dream. My memory was fucked and I couldn’t latch onto a thought long enough to ride it out of the fog. Too many hands. They groped and pulled—rough against my skin and digging into muscle and bone. I tried to retreat, my back pressed into a hard surface beneath me, and my nostrils filled with the smell of musk and damp stale air. I had no idea where I was, or how I’d gotten there. I kicked and gasped, trying to get back to the surface where reality lurked, shimmering in the distance, but just out of reach, like the sun on the surface of the water during a dive. A hand latched onto my hair and held my head back. My eyelids were finally freed from the sticky muck that held me in semi-consciousness, and I opened them to find myself staring up into unfamiliar green eyes. I only held his gaze for a few seconds—if that—but it seemed like it lasted for hours as my brain fought to categorize the details. Its useless attempt to understand what was going on. The man clutching my hair had vivid green eyes, but they may as well have been black given the emotionless void they displayed. His hair was shaggy, brown with a mix of grey, the same colors that stood out in his unkempt stubble. As if he needed any help looking rough. He exhaled and his breath settled over my face, reeking of booze and cigarettes. The smell made me queasy, but I didn’t have time to dwell on that, as another set of hands tugged at my jeans. My gaze traveled around the room, taking in the small crowd. At least half a dozen men surrounded the table where they had me spread out like a holiday feast. All dressed differently, from ragged tank tops to well-fitting dark button-down shirts, but they all projected an air of unchecked danger. Necks marked with tattoos, hands covered in callouses and scars. Scruffy faces accented their sneers and smirks, as they stood above me staring down with eyes starved of humanity and full of lust. Apparently, they didn’t expect me to put up a fight, because aside from the hand tangled in my hair, no one seemed concerned with keeping a tight grip on me. Probably because they outnumbered me, and I assumed they would have no problem beating the crap out of me as I struggled. They’d downright enjoy it. Unfortunately, I didn’t fully consider how that scenario would play out. I bucked and managed to knee the one pulling on my waistband in the face. He grunted, but I can’t imagine I inflicted as much pain as his retaliatory blow to my ribs. I sucked in air and rolled, curling around the injury and gasping for each painful breath as the sickening throb exacerbated my confusion. 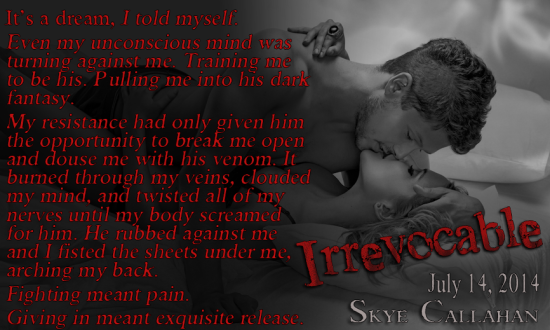 AUTHOR BIO
I’ve been coming up with stories for as long as I can remember, and in elementary school I began writing them all down. Ghosts and vampires, have always been my favorite beings to write about. Maybe it was growing up with a grandma who always told me about how she’d always rush home to watch Dark Shadows, and growing up reading and watching anything paranormal that I could find.

My debut, Fractured Legacy (Paranormal Urban Fantasy novella), was released on October 22, 2013, and the sequel Beyond the Divide is currently in progress and expected to release in early 2014.

When I’m not spending time with the voices in my head, I work in business consulting and hang out with my husband and all of our furry family members.

Random Stuff:
I LOVE Rum, but that’s probably not a secret.

I love sexy cars more than I love rum. My top picks would be a ’65 Mustang, practically any Bugatti Veyron, or an Aston Martin Vanquish.

I once based a character in a story on my husband, and the character died.
Don’t bother trying to figure it out, I never released that book.

I’ve never met some of my closest friends in person–some of them live on the other side of the world.

I never set out for anyone at work to know that I’m a writer, but now they buy my books, so it’s a good deal.

I’m not terribly good at being girly–I don’t wear makeup, only own 4 pairs of shoes, and I’ve never had a manicure.

I learned to handle a gun before I learned long division.

I cuss like a sailor unless I’m around my grandma.

While most of the people in my graduate research classes were buried in books, I was glued to the TV researching the evolving portrayal of “Indianness”.

I work with my husband and it’s the 3rd time we’ve worked for the same business.

If I’m not watching Top Gear, I’m probably watching something that was filmed before I was born. Currently, Dick Van Dyke is in my DVD player.

I have a phobia of crickets.

Should I throw you one hell of a fact if you’ve made it this far? I was diagnosed with PTSD two and a half years ago, and my doctor suggested that I start writing again to help cope with the symptoms.
Where to stalk Skye:
Amazon Author page: http://amzn.to/1gVX96i
Facebook Page: http://on.fb.me/Hmwsrp
Twitter: http://bit.ly/HchK5M   or  @Skye_Callahan
Google +: http://bit.ly/1939pfs
Wattpad: http://bit.ly/16hi2Sp
Blog: http://skyecallahan.wordpress.com/
Pinterest: http://bit.ly/19NyoTs
Goodreads: http://bit.ly/18vzdMP 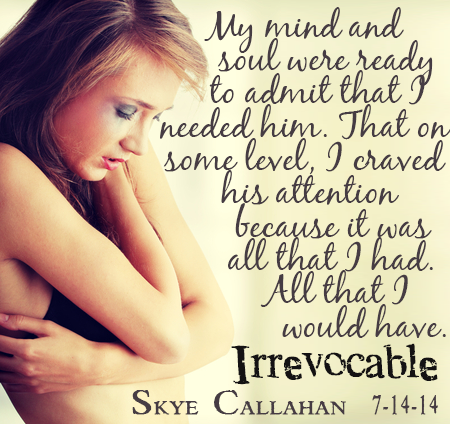