Let Me Love You (The Love Series Book 4) by Megan Smith with Giveaway, Excerpt & Review 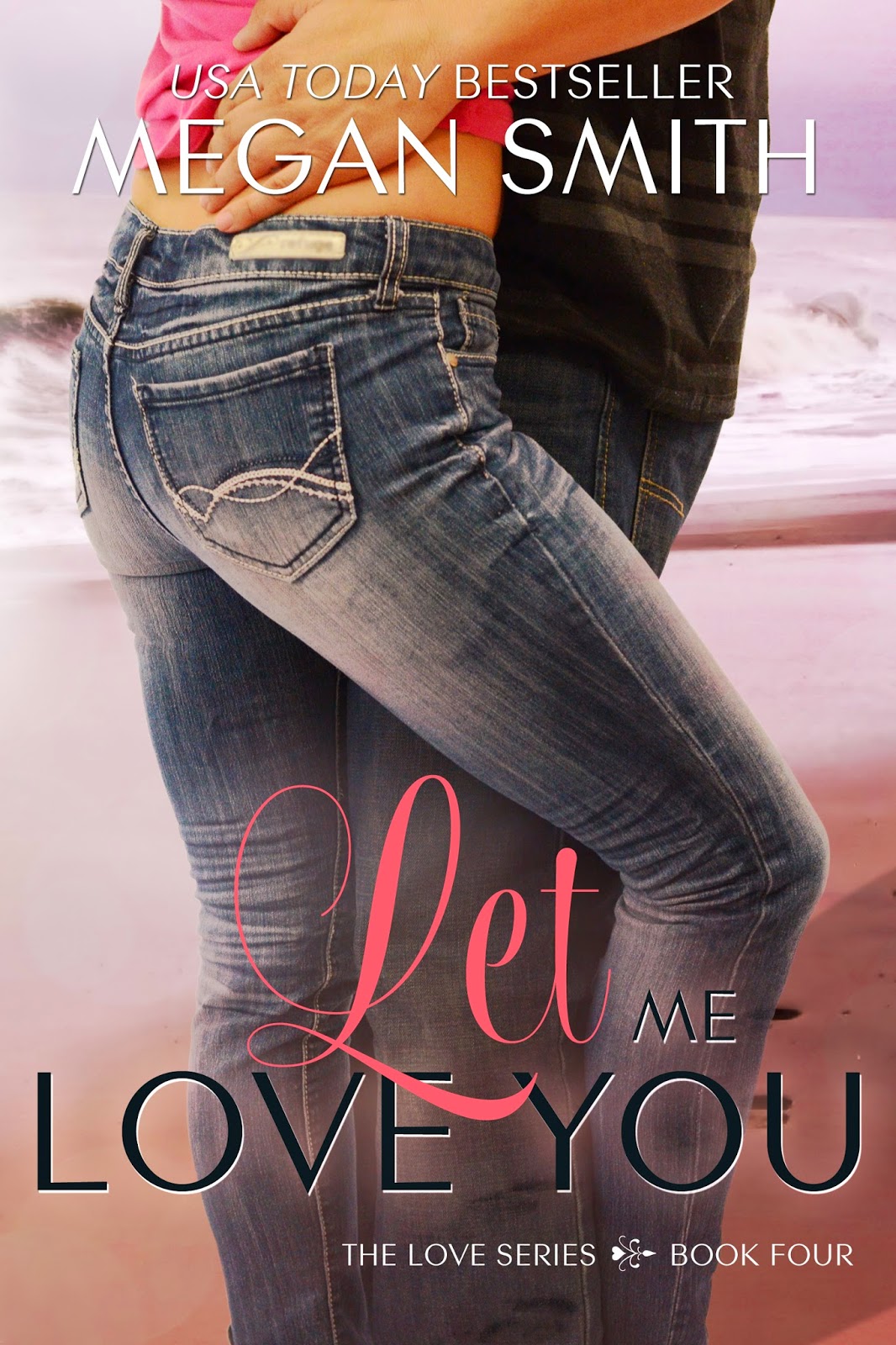 SYNOPSIS:
Jaylinn McCormick is determined to forget that one terrifying night which left her feeling broken and tainted. There is one person who can make her whole again… but he is hell bent on keeping her at arm’s length. She has loved him her entire life but can she wait for him to step up to the plate?

Cooper Cahill has loved Jaylinn for years. He wants nothing more than to put all her pieces back together but he deems himself unworthy. Choosing between his baseball career and Jaylinn has him feeling lost. Does he have what it takes to put Jaylinn’s heart back together again?

When their paths cross will they intersect or blindly pass each other by?

Will their lives take them in different directions? 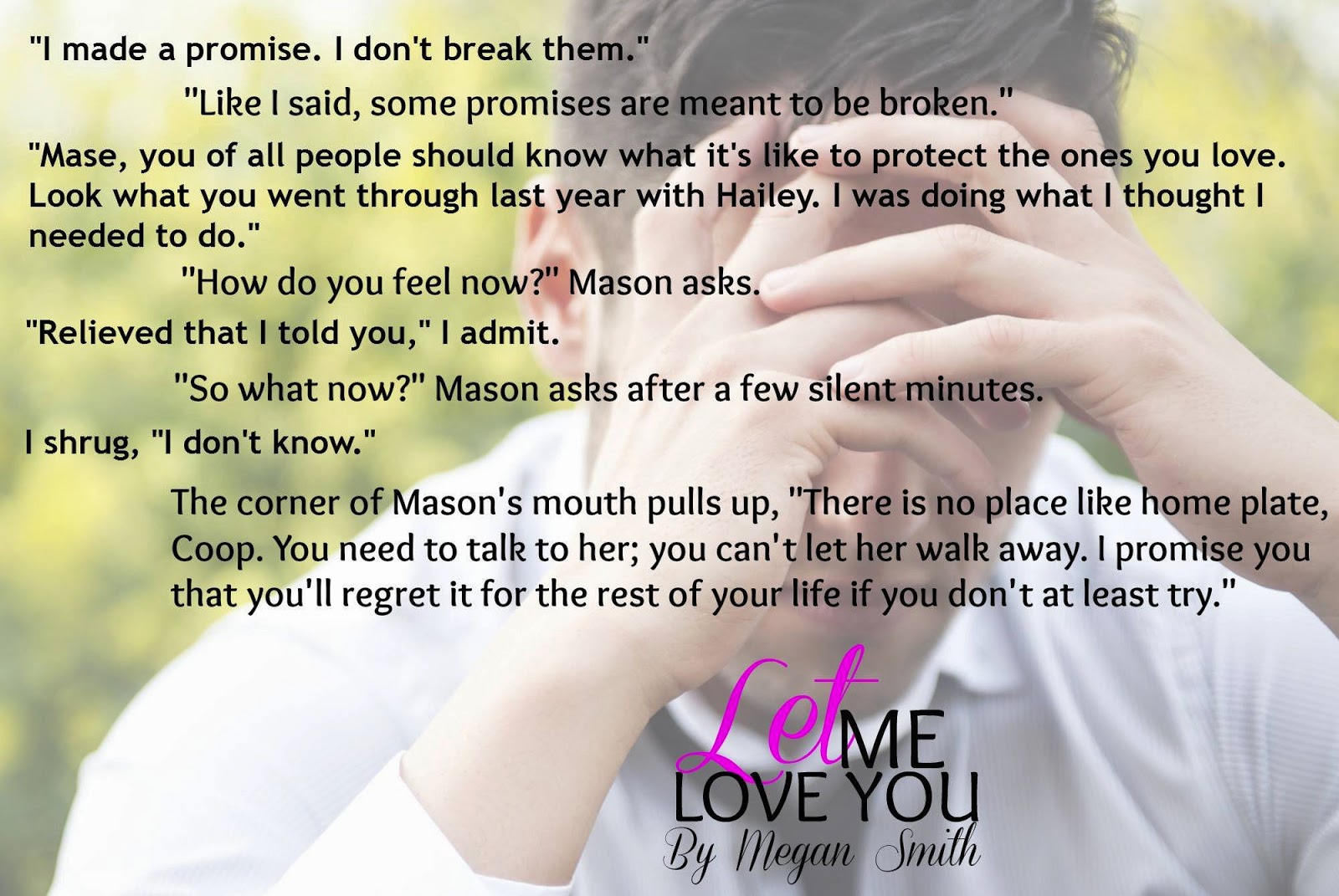 Excerpt:
“Yo man, have you seen Jay?” I ask Eli who came to the party with us.
He shakes his head, “Last I saw she was sitting on the couch over there with Kevin.”
My stomach drops. Kevin’s the campus drug dealer. He used to be a tight end for the football team in our freshman year at college but was kicked off the team after drugs were found in his dorm. He’s from New Jersey too, but he lived up north and actually went to high school with Eli in Hoboken. Eli said he used to be really popular until he started hanging out with the wrong crowd.
I drop my arm from around Courtney, the girl I was planning on taking home, and go to try and find Jaylinn. Fuck, I knew I shouldn’t have brought her with me but I couldn’t tell her no. All that girl has to do is bat her eye lashes and I’d cave.
I search the whole downstairs of the frat house for her and Kevin but they are nowhere to be seen. Panic starts to set in, chilling me to the bone. I race up the stairs, three on the right, three on the left and one straight back. The first door opens and some guy is standing there that I don’t recognize, pulling a shirt over his head. I check the bed to make sure Jaylinn isn’t there. I do this to the next five doors; all were opened and occupied but Jaylinn wasn’t in any of them. I get to the last door on the left; it’s dark so I reach around the wall for a light switch. I flick it on and the room is empty.
“Where the fuck is she?” I roar.
I slam the door shut and stamp to the last door. My heart rate spikes causing a swooshing sound in my ears, my body shakes with rage. I turn the door knob, it’s locked. I bang on it, “Jaylinn,” Nothing, complete silence.
Something isn’t right. My stomach knots and I try banging on the door a few times, hoping someone is just passed out and can’t hear me. After a minute I can’t take it anymore and I ram my shoulder into the door. Once, twice, and finally it gives way.
My heart stops, I can’t breathe and my vision blurs. 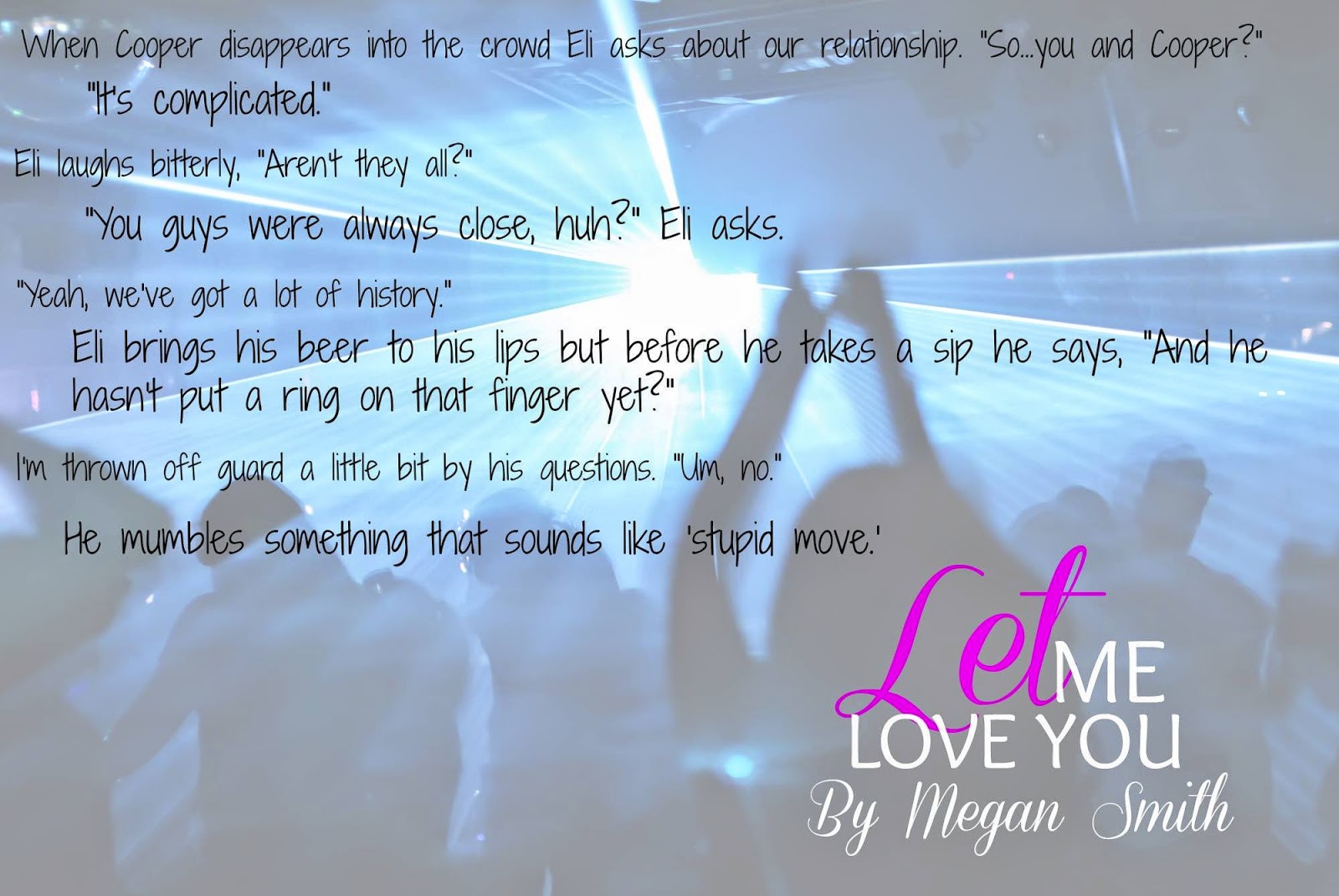 My Review: 5 stars
Megan has a way with a story. This one just keeps going. I remember at the end of Hard To Love You, I was so frustrated at the way things were left open-ended. I will say that this book ends in much the same way, but I've gained a different perspective on it. It makes me look forward to the next book to find out what happens next, and I really am. This was a great story, I loved that Cooper and Jaylinn had a complicated story that only they understood until towards the end of the book. They both love each other so much, but are having problems getting past something that happened, that only they know about. Those sort of things eat at you, and this does. It almost takes away what could be a beautiful relationship and guts the two people affected most. They do lose their way for a while, but I think that had to happen. I loved that the same characters are there and expanding, that we got to see more happiness for them, as well as a resolution to Jaylinn and Cooper's dilemma. I was glad when Cooper finally told Jaylinn what was holding him back, and I think that she had never thought that what happened hadn't affected him until he finally told her. Of course, he should have just told her initially, but nope. He's very like Mason and kept that secret, until he couldn't anymore. I am looking forward to the next book to find out what happens next in this group that is growing ever closer. 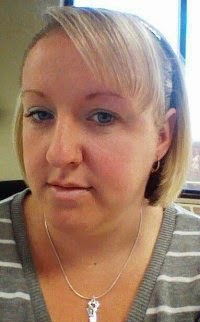 USA TODAY bestselling author Megan Smith is a New Jersey native managing purchasing for an award-winning business IT and software development firm - and by night creating the memorable characters her fans have grown to adore. Smith's The Love Series introduces readers to MacKenzie Cahill - a hopeful young woman who experiences adversity, challenges and the bittersweet triumph of true, authentic love.

Smith is a wife and mother, who makes time for her family, professional life and the creation of the Cahill's world. Fans of The Love Series - Trying Not To Love You, Easy To Love You, Hard To Love You - are captivated by relationships, special bonds and family ties pervasive in Smith's emotional, energized and engaging work. Smith is also the author of the 2014 releases, Let Me Love You - continuations of The Love Series, Finding Us (Finding Series) and a few top secret projects.

Coming Soon...
Let Me Love You
Finding Ours
Finding Happiness 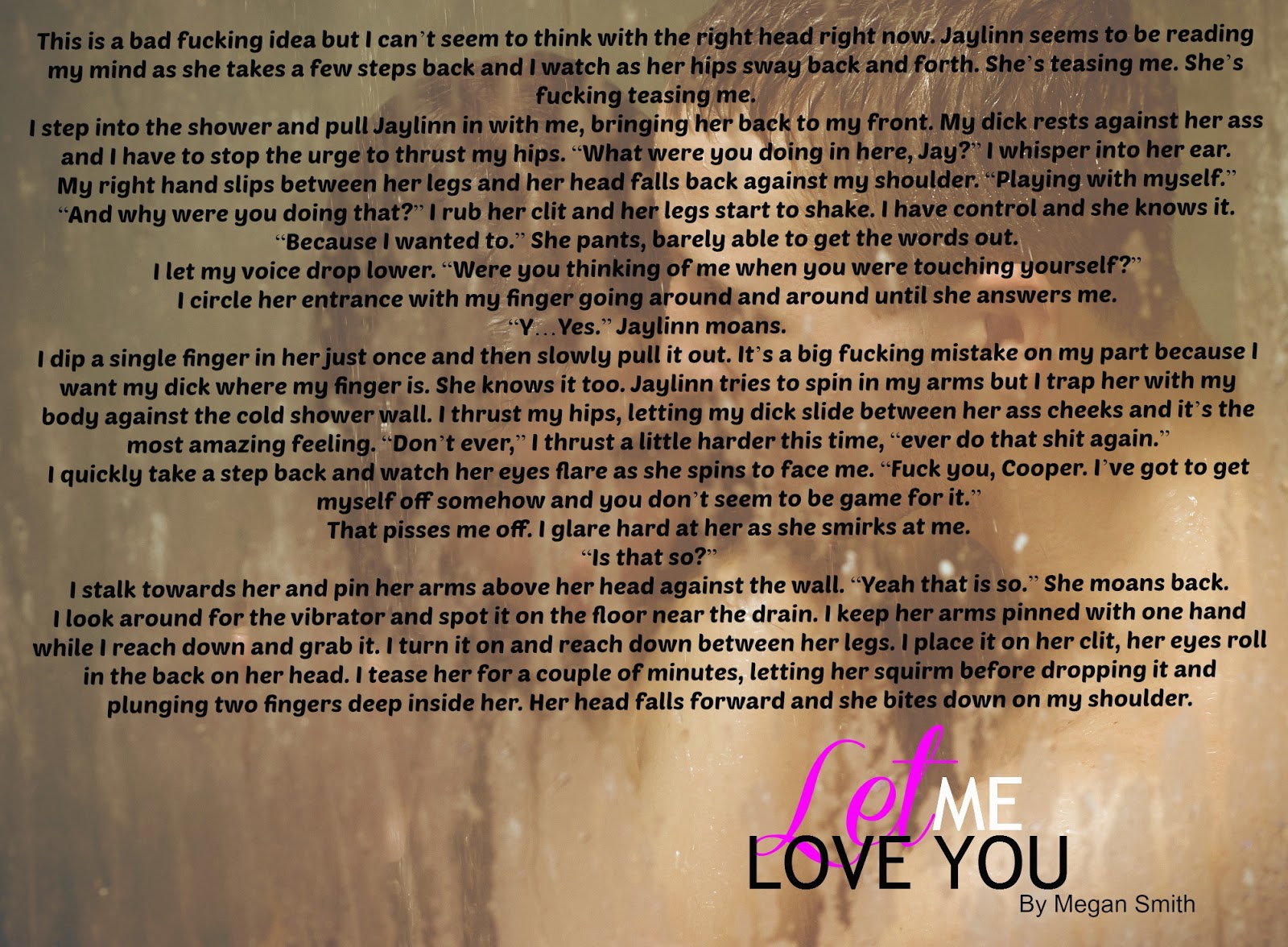 TRYING NOT TO LOVE YOU:
PURCHASING LINKS:
AMAZON **  B&N ** KOBO

EASY TO LOVE YOU
PURCHASING LINKS:

LET ME LOVE YOU
PURCHASING LINKS:
(WILL BE PROVIDED WHEN PRE-ORDER LINK IS AVAILABLE)