La Cosa Nostra, This Thing of Ours by Amie Nichols with Giveaway, Excerpt & Review 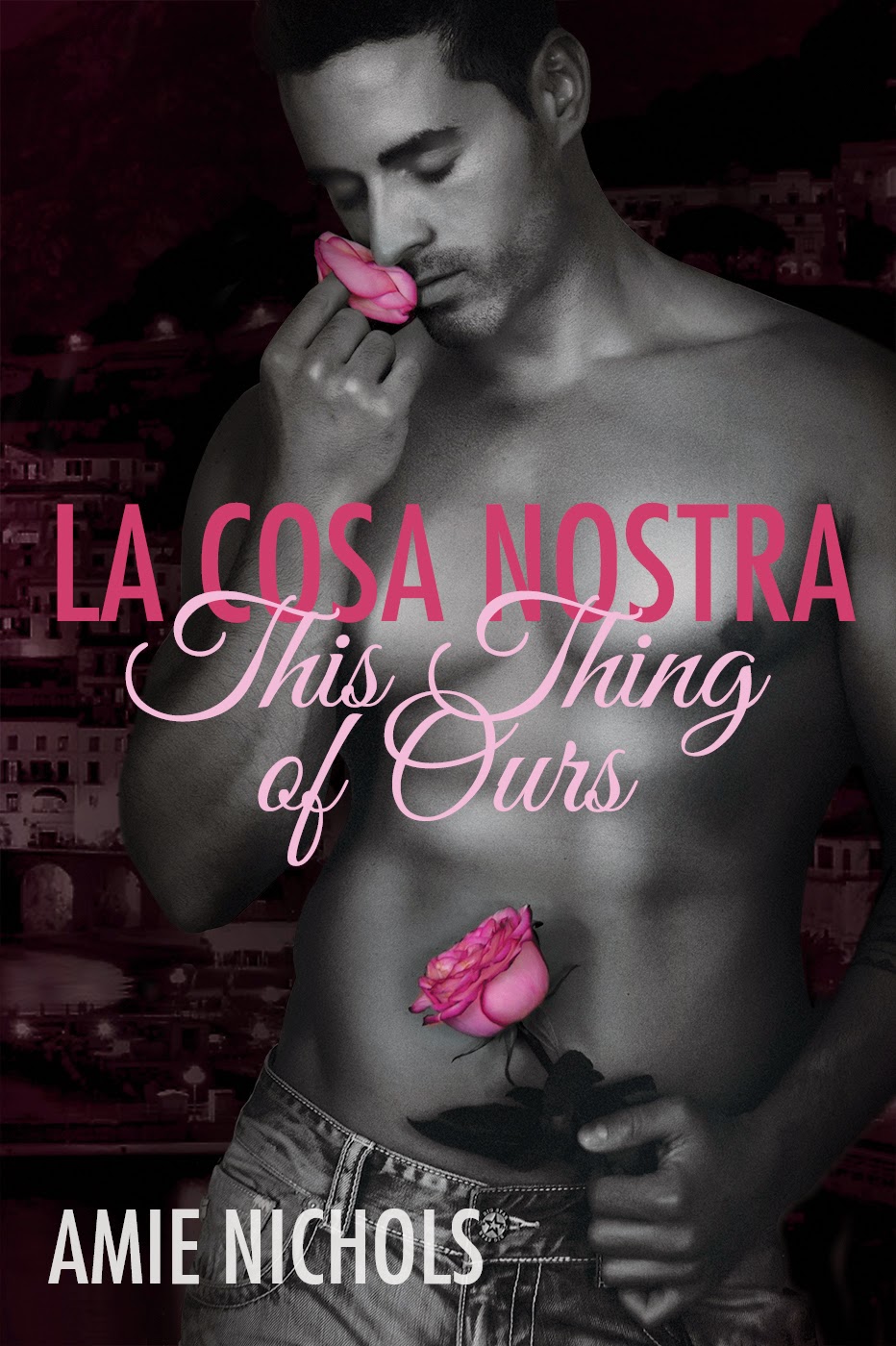 This is a standalone book meant for mature readers.

Harper Troy, like most students, was working her way through college barely making it by. She hears about an opening at a well known gentleman’s club, The Guardian, ran by a very well known Chicago Family, the Tarseta’s. Even though the uniform is very revealing and the other waitresses are catty bitches, the money is worth it.

Until she meets the youngest Tarseta, Liam. He’s Chicago’s most eligible bachelor and drop dead gorgeous. She feels an instant attraction. Being a known playboy, Harper fights the attraction and his advances.

Liam has his eyes on Harper the moment he sees her. Being different and not falling for his charms, he is determined to break her down. But Harper refuses to be another notch on his bed post.

Just when Liam is breaking down Harper’s barriers, he learns some shocking news that changes everything. Can he make her see they are meant to be together, or will he lose her forever? 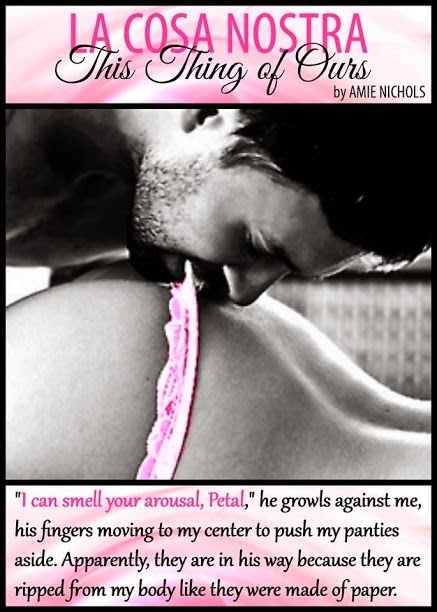 I had just popped the tab of my Diet Coke when the door opens. Like déjà vu, Liam enters the locker room, except this time I am sitting with my legs crossed and fully clothed.

"I just wanted to make sure you were all right," Liam says in his ridiculously sexy voice. Jesus, what is with this guy?

"Yes, why wouldn't I be?" I ask, sounding maybe a little harsher than I had planned.

"My father was very rude. I wanted to apologize for his candor," he says, all debonair and provocatively. "I think my uncle Matty has a huge crush on you." He chuckles.

"He's old enough to be my father," I say bluntly, with a little disgust.

"Ouch! I won't tell him you said that." He winces.  "You're really not interested, though?" he asks and I just shrug.

"It's just that most of the girls who work here would be jumping at the chance to land my Uncle." Liam just exudes sex in everything he says. I want to yell at him, "You have got to be kidding me, stop talking and fuck me already!"

I feel my face turn hot at my thoughts and turn my head away from him.

"Well, Mr. Tarseta, I am not like most girls," I say, not looking at his black lust filled eyes.

"What is that supposed to mean?" I shoot back.

"It's that you flirt just enough with patrons, but not enough that you are advertising something is for sale." He steps further into the room and sits next to me on the bench. He's close, close enough I can smell his expensive cologne, and holy fuck does he smell good.

My breath hitches and I let out a gasp as I feel the heat radiating between us. "Mr. Tarseta, I'm not for sale," I say, taking a drink of my Diet Coke, my mouth suddenly very dry.

"Ms. Troy, everything is for sale for the right price," he says low, almost in a whisper. I stand, feeling the need to put some distance between us.

"That is your opinion, but I assure you that there is no number large enough that can buy me," I tell him still avoiding those black eyes.

"So you are saying that nothing can buy you, nothing at all." He stands, inching his way closer. I feel the electric sparks bouncing off of me.

I swallow hard as the smell of him fills my nostrils, I feel him watching the hollow of my neck.
"I am not a possession to be bought, Mr. Tarseta. Besides, why would you want me anyway, you have tons of girls just itching for you to own them."

"Well, first off..." He lets out one of his low sexy chuckles, "I don't ever remember saying I wanted you." Ouch, now that hurt. I feel about two feet tall. He stands there cool as a cucumber, while I'm a hot mess of nerves and lust.

"I didn't mean to insinuate that you did..." I stutter, trying desperately to repair this very embarrassing moment. I turn to my locker to look for something, anything to distract me. I find my phone and pretend to read a text, also trying to pretend he is no longer in the room.
"Second, Ms. Troy, if I did want you, I would have you." He leans down close to my ear, so close I can feel his hot breath. Okay, that's it, I am not a toy for you to play with.

"Well, I guess it's a good thing you don't want me, because I assure you, Mr. Tarseta, you would not have me if you did," I snap, slamming my locker door. With a huff, I walk around the bench to avoid having to touch Liam as I exit the locker room. What nerve, what an arrogant asshole.

4 1/2 stars
This was a really interesting read. I enjoyed it a lot. The characters were interesting and the writing was very good. Liam Tarseta is used to getting what he wants without having to ask for it. Harper Troy is a woman who is working toward a goal and not looking for a man. She starts a new job and suddenly is the interest of Liam. Despite what her body tells her, she tells Liam to back off. Liam doesn't take no well, and does what he always does, further making Harper not want to be with him. Liam is really his own worst enemy when it comes to Harper. He doesn't know how to deal with the emotions that she makes him feel, and he wants her badly. Harper finally gives in, and agrees to a date. These two have a lot to work through, that's for certain. There is a lot of back and forth between them, many miscommunications and misunderstandings. It takes a while, but they finally get to where they want to be only to have someone from Liam's past almost destroy everything. I did love Harper and Liam together though, and I loved that Liam finally took a stand with his father. There was a part of the book that I really through was unnecessary, but it did add an element of danger and suspense, so I guess that worked out alright. I really did love the ending, that was kind of a surprise, as I had been thinking that maybe this could have been the first in a series. I was mistaken. 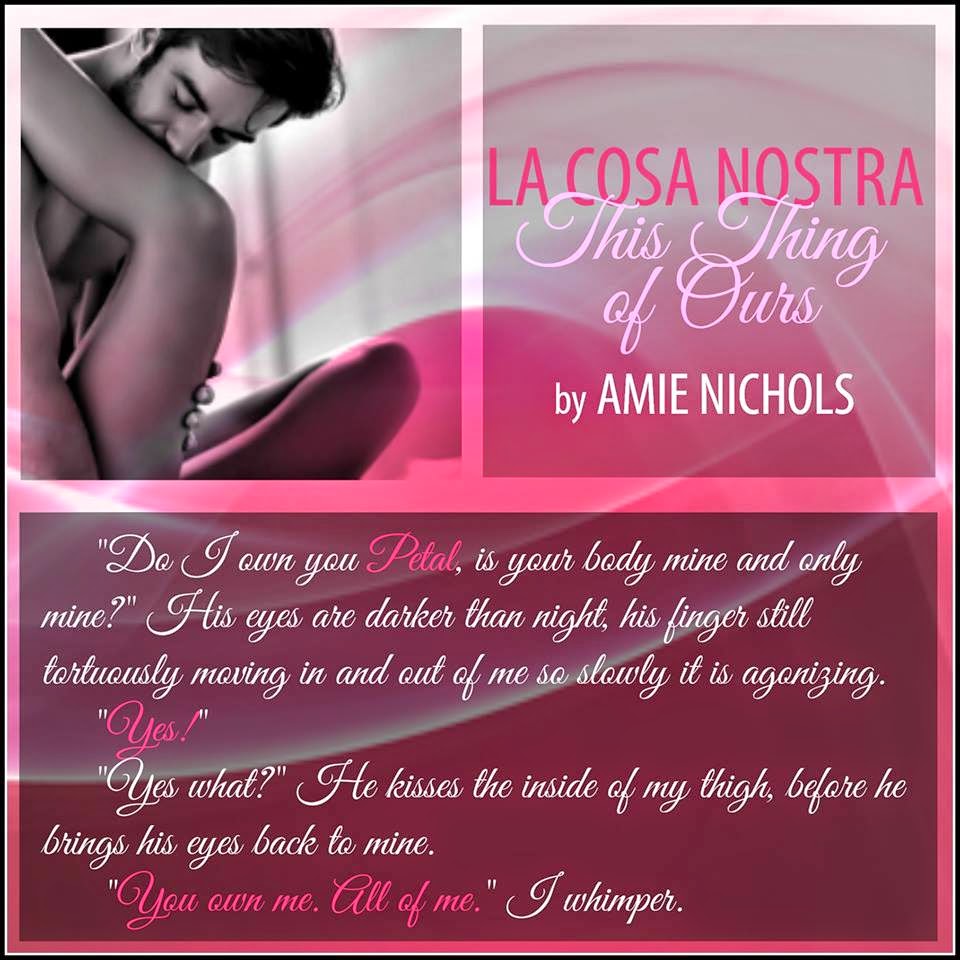 I live in Iowa with my amazing, supportive husband. He is my rock and my king, and treats me like all woman should be treated. (Like a spoiled Queen) I have two miniature dachshund's that are my babies, and they love to keep me company when I am writing away on my next WIP. I'm about to publish my 6th book, and can hardly believe how my life has changed. I'm called an author, and still can't believe it. I've have met some amazing woman on my journey so far, and have learned so much. (Sometimes the hard way.) I've been like a sponge soaking up all the information I can on how the publishing world works. It's been a rollercoaster ride so far with its ups and its downs. No matter what, I will never regret anything I've done. You can't succeed if you don't try, and if you don't try you won't succeed. One of my favorite quotes "If the dream is big enough the facts don't matter". Some other info about me, I love my family, friends, wine and anything caffeinated. I also love writing HEA. For the same reason I won't watch a movie that I know will make me cry, (with the exception of Steel Magnolias) I will never write a book without a HEA. There might be a few twists and turns, a cliffhanger or two. But ultimately my stories will leave you feeling warm and fuzzy inside. For me, reading is entertainment, a way to escape this crazy insane world. If a book leaves me feeling sad, mad or gut wrenched, it is not for me. There is enough gut-wrenching sadness in this world, I don't need to read about it too. I started writing 3 years ago, and have no plans on stopping. So keep your eye on me because with the help of some amazing people and my wonderful fans, this girl is going to be on the New York Times best selling list someday.

**********************************
Amie and us Word Wenches would like to thank all of the bloggers who helped to make this blog tour a HUGE success and for all of their hard work and the reviews that will be posted over this next week. You can see the tour schedule here for the entire week and check out all the reviews. Like their blogs and follow them while you are there.