The Heart's Game (The Kelly Brothers #4) by Crista McHugh with Giveaway, Excerpt & Review 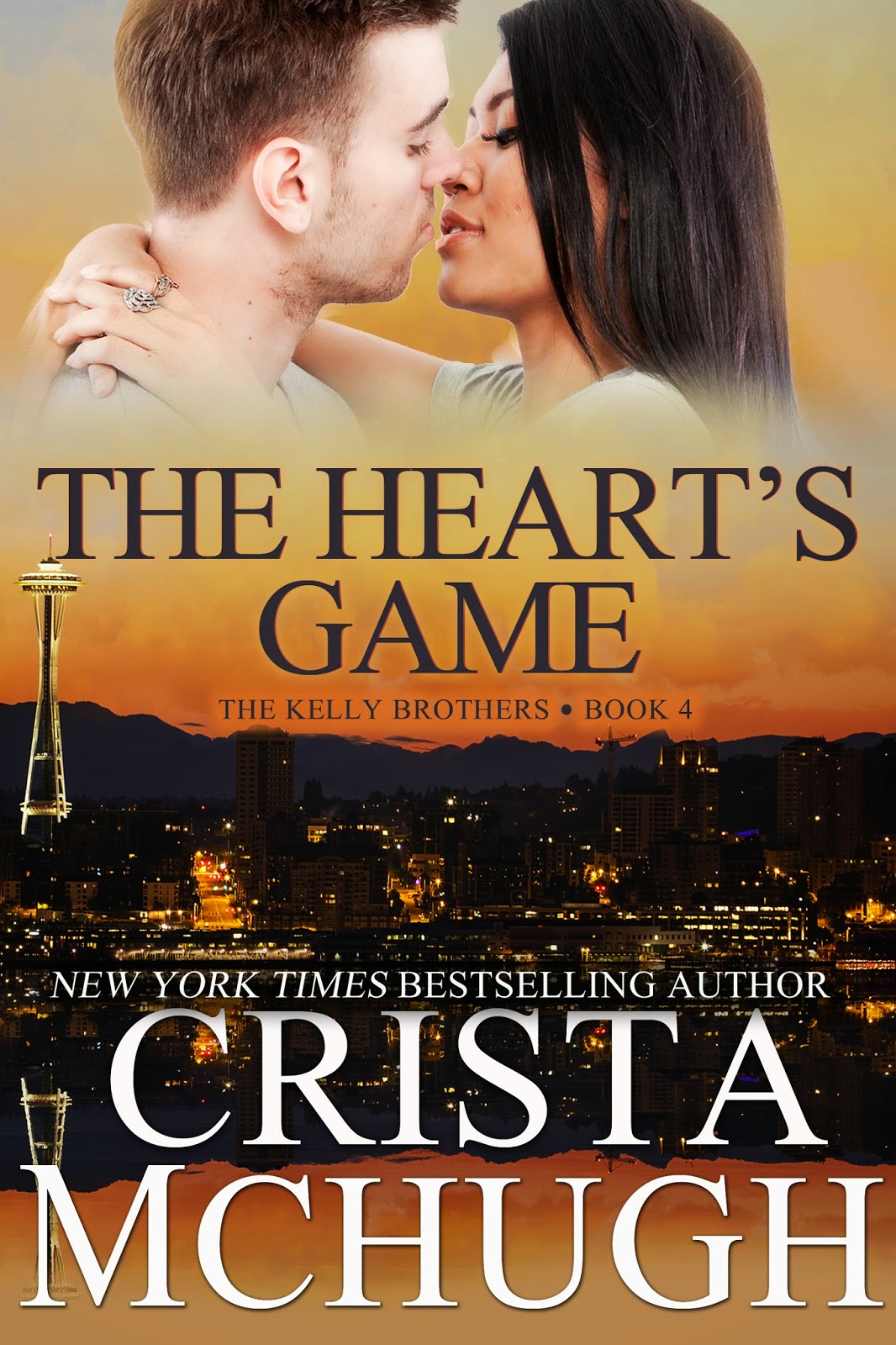 Robotics engineer Jenny Nguyen has given up on finding Mr. Right. So when her brother and his husband approach her to act as surrogate for their child, she sees it as her only chance to have a child and accepts. One week after she initiates the process, however, she meets a man who gets her heart pumping for all the right reasons and gives into the temptation. When the test turns positive, she’s believes she can’t handle both the pregnancy and dating, but she underestimates how persistent a Daniel Kelly can be.

When surgeon and gamer-geek Dan meets a pretty woman dressed as a Sailor Scout at Comic-Con, a roll of his lucky 20-sided die tells him he should take a gamble on her. One night of passion leaves him longing for more, but Jenny’s refusal to return his calls afterward leaves him wondering if the attraction was one-sided. An accidental discovery of her pregnancy has him convinced the baby is his, and he’ll stop at nothing to win her heart.

She grabbed her staff and spun around, only to collide with a mass of muscle. Her soda splattered across her breasts, and her staff clattered to the floor. Her ankle twisted in her high-heeled boot, but a pair of steady hands caught her.
“Careful, Sailor Senshi,” a deep voice with a hint of suppressed laughter said.
Jenny stilled and drew in a sharp breath. The warm scent of leather filled her nose, followed by notes of a spicy, masculine cologne. Her pulse jumped, and her skin tingled with awareness. She slowly lifted her gaze to look into the face of her rescuer.
Lines crinkled around a pair of bright blue eyes that complemented the amused smile on his face. He was dressed like Mal from Firefly, a true Browncoat down to the last detail, but she doubted Nathan Fillion looked this good in person. Her tongue tripped over itself as she stuttered, “Thank you.”
His grin widened, but he made no move to let go of her. His gaze flickered from her chest back to her face. “Trust me when I say the pleasure was all mine.”
Bingo! Perfect candidate for a one-night stand found.
Now she just had to gather up her courage to follow through with her plan without sounding like a desperate idiot.
He grabbed a few bar napkins with his free hand. “Sorry about spilling your drink.”
Under normal circumstances, she would’ve taken the napkins and cleaned up the soda herself, but the image of him lowering his lips to her skin to remove the droplets off her breasts popped into her mind. A shiver coursed through her. Would he suck them up with teasing nips, or would he use long, languid licks?
She tore herself away from her fantasy long enough to realize he was still offering her the napkins and wearing that amused grin. As she took them and began dabbing up the soda, she began to worry if she was reading him wrong. Robots and code, she understood and could manipulate with the best of them. Men were an entirely different matter.
Well, at least he gets points for being a gentleman.
And his hand remained possessively planted at the base of her spine.
“If anyone should be apologizing, it’s me,” she managed to get out. “I was in such a hurry to move to a different spot—”
“I figured as much.” His eyes flickered sideways to the table of hobbits. “I overheard what they were saying and was actually coming to rescue you.”
Her nerves abated, and a smile tugged at her lips. “And do you think a Sailor Scout needs rescuing?”
“Depends on the Senshi. If memory serves me correctly, though, Tuxedo Mask was always swooping in to rescue Usagi.”
“But as you can see, I’m not her.” She ran her gloved hand along his brown coat. “And I think you’re a little too casually dressed to be him.”
“I left the tux and mask at home,” he teased with a wink. “But why don’t we move to the other side of the bar so I can at least buy you another drink?”


She bit her bottom lip long enough to quiet that little voice in the back of her mind that said good girls didn’t hook up with hot guys they just met. She’d listened to that little voice for too long. Tonight, she was going to throw caution to the wind and finally know what it was like to embrace her sexuality. “That sounds like a fine idea.”

My Review:
I really enjoyed reading this book, as I have any of Crista's. This one was about Dan, a heart surgeon and a gamer. Jenny is a robotics engineer and also a gamer. They meet at Comic-Con, and sparks fly. Personally, I love that Dan is dressed like Mal from Firefly. Jenny is dressed as a character from Sailor Moon, never got into that, though. They have one night together, but don't intend to see each other again, at least that's Jenny's plan. Fate has other ideas in store for Jenny and Dan. They run into each other far from Comic-Con, and firmly in each others world. I really loved that Dan was there for Jenny after he realized that Jenny had told him the truth and that he had assumed some things. They had a few hiccups along the way, but I really loved the playful relationship that they built together and the way that things turned out for them. I love this series, and every Kelly brother is unique in his own way. Crista has made me into a fan, since the first book, and I certainly can't wait to see what she has in store for the remaining brothers.

Author Info
Crista McHugh is a NEW YORK TIMES and USA TODAY BESTSELLING author of fantasy and romance with heroines who are smart, sexy, and anything but ordinary. She currently lives in the Audi-filled suburbs of Seattle with her husband and two children, maintaining her alter ego of mild-mannered physician by day while she continues to pursue writing on nights and weekends.