Everything I Shouldn't (Nashville Nights #2) by Stacey Mosteller with Giveaway, Excerpt & Review

I didn’t plan on David getting suspicious, and I definitely didn’t plan on getting caught. My selfishness has cost Jeremy everything, my brother won’t even look at me, Lyric must hate me for practically blackmailing her to keep silent and my best friend is barely speaking to me.

Now my life is full of secrets and lies. The people around me have been affected by the choices I’ve made and the lies I’ve told. But what will they do when they discover the biggest secret of them all?

Jeremy is everything I shouldn't want, and the person I can't live without. 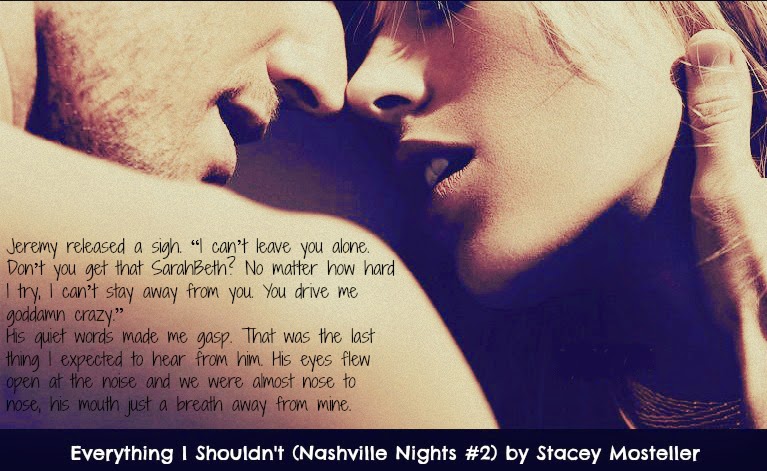 “Wyatt,” she spits out, cutting me off. Yeah, I know his name, but I like getting her all riled up. “And jealous? Of what? You and the tramp hanging all over you? As you pointed out, I’m here with my own date. I don’t need to cry about you picking up some stranger in a bar Jeremy!” She’s the picture of irritation right now, and it’s taking everything I have not to laugh at her. She’s so indignant and trying so hard to mask her emotions. Unfortunately, I know exactly what she’s feeling because I’m suffering from the same thing.
I stalk over, standing toe to toe with her, knowing that the fact that I'm a foot taller than is going to be intimidating and knock her off her game. Dropping my face close to her ear, I murmur, “I know you’re jealous, Little Bit. Know how I know?” She shakes her head infinitesimally and I lean in even closer to tell her, “Because I am too.”
SarahBeth sucks in a breath, stiffening at my words. Straightening to my full height, I look down at her, waiting for her to look back up at me. When she does, I feel like I’ve been punched in the gut. Her eyes are wet, and I can’t stop myself from cupping her cheeks in my hand and brushing off the single tear that’s trailing down her cheek. There’s just something about this girl that draws me to her, even though I know I should stay away.
I lower my head, my intent clear, waiting for her to tell me no like she did earlier. Instead, she leans further up on her tiptoes, quite the feat considering how tall her heels already are, and presses her lips to mine. This. This is what I’ve been missing for months. I’ve kissed a lot of women since I broke up with Melanie, but I’ve never felt this with any of them. If I’m honest, I’ve never felt this with anyone but SarahBeth.
Before I even realize that I’m doing it, my hands run down her throat, then her shoulders and her arms before finally grasping her waist and lifting her so she can put her legs around mine. She immediately does, locking her ankles right above my ass. Turning, push her up against the wall at the same time I push my tongue fully into her mouth. Her hands move up to grip my hair and I press her harder into the wall at the feeling of her small hands tugging on my hair.
I shouldn’t be doing this, I shouldn’t be taking advantage of her this way, but in the back of my head I know I’m not. She kissed me, not the other way around. And even though I was going to kiss her, the fact that she went the remaining distance means that she wants it just as much as I do. Letting go of her mouth, I kiss a trail across her jaw and listen to her breathing stutter. When I make it to a spot behind her ear, her entire body shivers and I smile against her skin.
“Do you like that, Little Bit?” I ask, my voice rough with arousal as I lick a trail down to where her throat meets her shoulder and bite down gently.
She gasps out, “Y….y…yes!” before a breathy moan escapes her lips and her entire body shivers.
Pressing her into the wall once more, I can feel the heat of her against my cock and I want nothing more than to sink inside her. Sliding my hands up from her waist to just under her breasts, I wait for her to make a decision. When my thumbs brush the undersides of her breasts she arches her back. I cover each one with my hand, pinching her nipple lightly between two fingers as she presses even further into me. God, I love feeling her against me.


I cover her mouth with mine once more, pushing my tongue forcefully into her mouth and rocking back and forth into her heat. Her nails are clawing my shoulders as she tries to both push me away and bring me closer. Lifting my mouth from hers, I start to speak when the back door slams and SarahBeth goes rigid.

My Review: 4 1/2 stars
I really loved this book. I  loved that it went back to before everything that happened in Save Me From Myself, the first book in the series. This book shows you everything that SarahBeth and Jeremy both went through trying and failing to fight those feelings they had for each other. Granted, there were other choices they could have made along the way that would have been less hurtful, but no one is perfect and we all make stupid mistakes. I loved that we got to see the hurt that they put each other through, trying to deny those feelings because they felt it was wrong. Love is never wrong, sometimes bad timing, but you can't help who you love. It would have been easier, I think, if they would have been honest from when they couldn't stop anymore. They would have been better off, less people wold have been hurt. Hindsight is 20/20. This book made you see and feel everything that SarahBeth and Jeremy had been through over the years and made me more understanding of why they did what they did. I can't wait for the next book to find out what's in store for not only Jeremy and SarahBeth, but also to get more of Lyric and David. 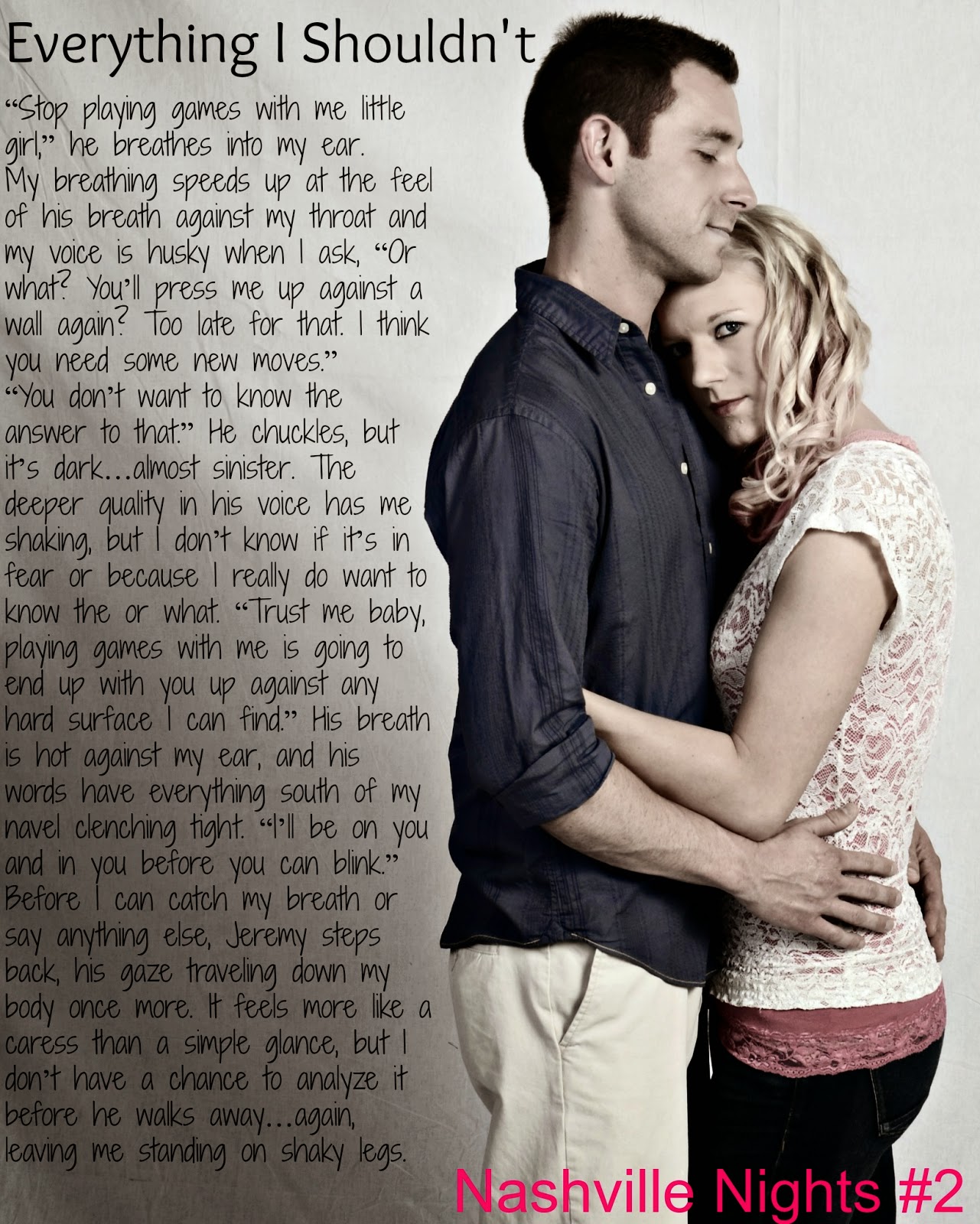 Stacey is a wife, reader, author and mother to 3 boys, ages 15, 14, and 8 – not necessarily in that order! After spending the first half of her life in a small town outside of Philadelphia, PA, her parents moved to another small town in North Carolina. She married her husband after dating a total of three months and knowing each other for six! People thought they were crazy, but 2014 marks their 10 year anniversary, so it obviously worked out! She loves to read and can usually be found curled up with her iPad when she’s supposed to be writing or creating playlists on Spotify!