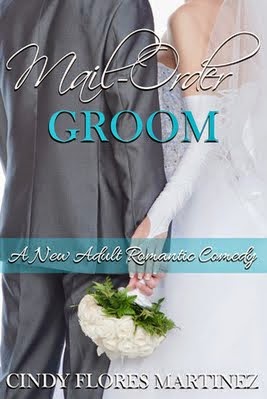 
Synopsis –
Mail-Order Groom, a debut romantic comedy novel by Cindy Flores Martinez, was inspired by the author’s own Polish ancestry and is based on her screenplay and movie project of the same title, which she shopped around Hollywood, New York, and other parts of the world.
A sweet romance about an American woman who marries a stranger from Poland after her fiancé leaves her right before the wedding.

Lisa is about to marry her first real love and have the wedding of her dreams, but her world is shattered when she finds her fiancé, Jeff, in the arms of another woman. When he calls the wedding off, Lisa is heartbroken.

In a twist of fate, she meets Krzysztof Zielinski from Poland on Mail-Order-Grooms.Com. He needs to marry an American woman so that he can stay in America, and he’s willing to pay money for it. His reason for needing to stay is what tugs at Lisa’s heart and convinces her to say “I do” to him. After all, it’s going to be strictly a business deal. She won’t even have to live with him, and marrying another man would be the perfect revenge on Jeff.

Lisa races to the altar with her stand-in groom, but she soon learns that she actually does have to live with him. Things become even more complicated when she finds herself falling for him, and he’s not planning to stay in America forever. Will Lisa’s heart break all over again or will she find love and happiness in the end?

My Review: 4 1/2 stars
This was a very good book. My only wish would have been if it would have gone on a bit longer. I really enjoyed reading this. I was pissed, just like Lisa when she caught her fiance with another woman just two days before the wedding. But I think it all turned out for the best. When Lisa decides to go ahead and marry someone else, Krzys, things get really complicated, really fast. Krzys is a nice guy, who Lisa finds attractive and then has to fight her attraction to him as the days go by. They communicate well and talk about what their dream used to be and why they aren't pursuing them. This only brings Lisa and Krzys closer. Then in one day it all comes crashing down and everything falls apart. Lisa is stunned when she finds that Krzys left the country, so she goes after her husband determined to find out if they really do have any future. I have to say that I love the ending, it was a surprise, but a good one. Cindy made this a really fun, enjoyable if a little anxiety ridden toward the end. I will be on the lookout for more from Cindy.

Author Bio and Links –
My name is Cindy Flores Martinez. I was born and raised in a suburb of Los Angeles. I have an MFA in Creative Writing with an emphasis in Screenwriting. I have been a screenwriting instructor, screenplay consultant, script reader, and screenplay collaborator. My debut novel, Mail-Order Groom, which was inspired by my own Polish ancestry, started out as a screenplay and movie project.

I spent years shopping it around Hollywood, New York, and other parts of the world and had two well-known actors, one of them Academy Award nominated, interested in portraying the lead character’s parents. After not finding the success I wanted, I officially canceled my film production company in November of 2009 and embarked on the journey of turning my screenplay into a novel.